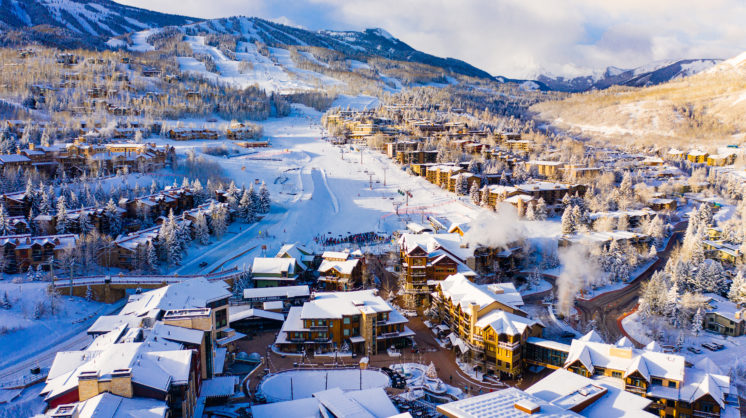 With its snowcapped peaks, quintessential après-ski ambience and comforting mountain fare, Colorado gives the North Pole a run for its money in the winter wonderland department. There’s no shortage of charming mountain towns to visit across the state, from the Bavarian beauty of Vail and the world-famous luxury of Aspen to homey hot spots such as Breckenridge and Steamboat Springs — but one bucolic charmer that might fly a little more under the radar is Snowmass, an Alpine-style hamlet a snowball’s throw from Aspen.

About three hours west of Denver in central Colorado (or a quick flight to the Aspen airport), Snowmass is a year-round mecca for recreation and adventure, with endless hiking and mountain biking trails, plus wine festivals and hot air balloons — but the village feels particularly cozy come winter. That’s largely thanks to Olympic skier Bill Janss, who helped conceptualize and design the town in the 1960s, modeling it after mountainside ski villages in the Alps while emphasizing the abundant nature around the town center. What started with five chairlifts on the 14,000-foot Snowmass Mountain has evolved into a mecca of high-alpine adrenaline and winter wonders, both inside and out, from historic restaurants serving up soulful stews to majestic slopes just waiting to be traipsed.

At once sleek, chic and warmly welcoming for any type of traveler — dogs included — the Limelight Hotel Snowmass is a great place to hole up for a snug winter escape. The 99-room hotel is an anchor in the recently completed Snowmass Base Village, a massive $600 million development. Along with the addition of a public events plaza, residences, an ice skating rink and a gondola located mere steps from the hotel, the contemporary community allowed Snowmass to expand its accommodations significantly. Adorned with fireplaces and outdoor fire pits, and a front lawn that morphs into an ice rink in the winter, the haven also boasts a huge outdoor hot tub, a kids room stocked with toys and books, a lounge with live music and après-ski-worthy cocktails and an on-site ski room for storing winter requisites. Hot tip: Guests can order drinks in to-go cups from the lobby bar to take to the hot tub, and the espresso martinis pair particularly well with a steamy soak.

Staying in Snowmass Base Village puts visitors in the midst of the town’s wintry offerings, with ski lifts running annually from late November through late April. In addition to the new ice rink right outside the Limelight Hotel’s front door, snowy splendors include more than 3,300 acres of mountain terrain, with 20 chairlifts and 98 trails that total 150 miles’ worth of ski and snowboard routes — running the gamut from beginner slopes to an extreme adrenaline rush. Unlike more crowded ski areas in Colorado, Snowmass has more than enough room on the slopes, with an average of two people per acre and trails as long as 5.3 miles. Elk Camp Meadows, located halfway up the mountain, is the go-to place for beginners, while Sheer Bliss is a run that provides more of a challenge. Hanging Valley, marked by steep terrain and thick forests, is the mountaintop section reserved for experts.

For something a bit slower, Snowmass Village has snowshoe and cross-country ski trails on the Snowmass Golf Course. Snowmass is also one of the few mountains to offer 24-hour access for uphill skiers looking for a more strenuous workout. Thanks to the mountain’s expansive glades, three terrain parks and two halfpipes, Snowmass is equally beloved by snowboarders. You don’t need to strap onto skis or snowboards to feel the rush, though — the Alpine Coaster is a mile-long track that lets riders control their own speed in individual cars through the Lost Forest (located in the Elk Camp area accessed via chairlift) midway up the mountain.

Back in the Base Village, the ice rink hosts a curling series beginning Dec. 22, wherein teams of two can vie for points on select dates through winter. At night, Snowmass Luminescence is a spectacular light show running Dec. 18 through Feb. 26, which includes an interactive LED experience called The Tunnel, complete with vibrant arches and pathways. One particularly magical winter activity is Ullr Nights, a recurring event series that turns Elk Camp into a veritable North Pole, complete with sledding, guided snowshoe treks, tubing, live music and hot cocoa by the campfire. The ticketed event occurs on select dates December through March.

No matter your outdoor activity of choice, the ideal way to wind down is with some s’mores by the fire. For the duration of ski season, Snowmass offers free s’mores kits from branded carts in both Snowmass Base Village and on the Snowmass Mall.

Where to Eat and Drink

S’mores and hot chocolate are the tip of the iceberg when it comes to cozy Colorado cuisine this time of year — and no place does mountainous comfort food like Snowmass. Open since 1972 on the quaint Snowmass Mall, The Stew Pot is the oldest restaurant in town, and its endurance is a testament to its warm hospitality and even warmer stews. Families flock here for the perfect post-mountain meal: bubbling crocks of beef stew, chili and habanero pork stew, along with beer, wine and cocktails.

Right around the corner is Il Poggio Ristorante, another long-standing staple that commands quite the crowd for hearty Italian cuisine. With the intimate, rustic feel of a wine cellar, the restaurant serves winter warmers including steamed mussels, rosemary-flecked pizzas and decadent pastas like sweet potato-filled goat cheese with sage brown butter and plump gnocchi tossed with succulent veal tenderloin and truffle butter.

Inspired by Snowmass’ Alpine origins, The Edge is a hidden gem of a restaurant — on the second floor of the Timberline Condominiums — that offers Bavarian-style bites like cabbage rolls in red pepper sauce, creamy potato pancakes heaped with lingonberries and sour cream and Wiener schnitzel available with veal, pork or chicken. For more of that European vibe, start your morning at The Crepe Shack, a cute cafe slinging sweet and savory crêpes with fillings like smoked salmon, rotisserie chicken and banana cream pie.

For a classic après-ski vibe, stop off for a pint or two at the New Belgium Ranger Station, a comfy taproom on the ski hill at the edge of the Snowmass Mall. Here, guests will find a curated draft list from one of Colorado’s preeminent breweries, including some seasonal brews available nowhere else.