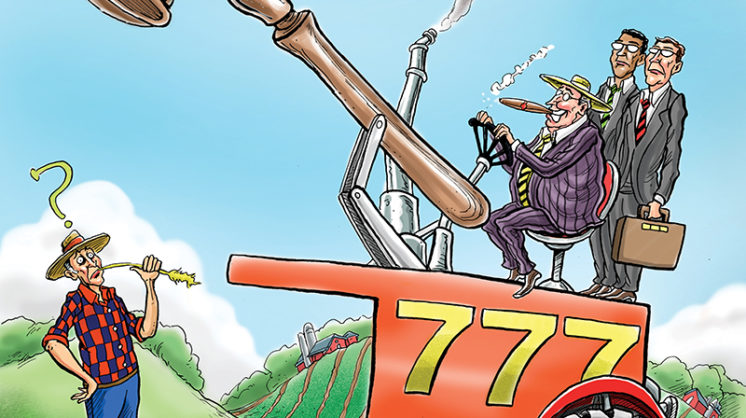 Parse the language of State Question 777 and what you are left with is an abundance of questions. The so-called Right to Farm legislation “protects the rights of farmers and ranchers to engage in farming and ranching practices.” Aside from the lack of clarity related to the scope of “practices,” opponents also point out that the idea behind this state question was not introduced by farmers or ranchers.

State Representative Jason Dunnington, D-Oklahoma City, voted against the bill in 2015 – one of only five representatives to do so – and he said the bill was introduced by two legislators who are not themselves farmers or ranchers. Dunnington, who comes from a large farming family – the farm is still active in Indiana – said state questions usually arise when enough people sign a petition to get the Legislature to do something about an issue the public feels has not been properly addressed.

“In the case of State Question 777, what we have is legislation introduced by Senator [Jason] Smalley and Representative [Scott] Biggs, the language of which is drawn from an ALEC mock bill used in North Dakota, and one that was defeated by the unicameral Legislature in Nebraska because legislators said it would hurt farmers and ranchers in the state,” Dunnington says.

“I voted against it because I think it harms the interests of farmers and ranchers,” Dunnington says, “but I’m also distrustful of ALEC legislation since it often represents the interests of multinational corporations.”

Former Attorney General Drew Edmondson is also supporting the “Vote No” side of the issue. He said the major reason he took a side was because he wanted to further the work he did as AG. Edmondson spearheaded reforms in agriculture law that protected the state’s water supply from large chicken operations in eastern Oklahoma and large hog farms in the west.

“A ‘yes’ vote on SQ 777 will give large corporate farms license to do what we worked so hard to stop,” Edmondson says. “In spite of the claims of the proponents, family farmers are being driven out of business not by regulation or liberal organizations, but by the huge farming operations 777 is meant to protect. It’s an ALEC bill, and they have never been known for protecting the little guy. In fact, support for SQ 777 comes from farm organizations like the Oklahoma Farm Bureau … not family farmers.”

“A ‘yes’ vote on SQ 777 will give large corporate farms license to do what we worked so hard to stop.”

“The result of a ‘yes’ to SQ 777 is a fundamental change to how agriculture is governed at all levels in Oklahoma,” Jones says. “Any farming or ranching entity or related industry could challenge in court any ag-related legislation, restriction or rule if it can be seen as restricting the rights of farmers and ranchers to practice their business in terms of ranching practices, deployment of technology, livestock production, et cetera.”

What that means in practice is that a farming entity with sufficient legal representation – often an issue of financial wherewithal – would be able to sue municipalities or other government agencies that attempted to restrict certain practices. Essentially, the legislation would be an affirmative defense for farmers and ranchers when facing potential restrictions on their agricultural practices.

Jones said this kind of legislation creates a couple of problems. “It’s hard to see what agricultural laws would not result in litigation under this sort of legislation,” he says. “That means it would best be utilized by entities that can afford litigation; small, family farms and small municipalities don’t typically have those resources.”

Technological development creates another complication for Right to Farm. Jones offers as a possible scenario – because technological innovation is always ongoing – the development of a new technology 10 years from now that allows for more production but increases water pollution in the area. A ‘yes’ vote for SQ 777 would mean that a municipality likely would be sued for passing an ordinance that restricts pollution levels, and because of the affirmative defense, the burden of proof would be on the municipality.

Whom Does It Harm?

The second clause of the ballot verbiage reads: “It prohibits the Legislature from passing laws that would take away the right to employ agricultural technology and livestock production without a compelling state interest.”

Mark Yates is the director of field operations for public policy for the Oklahoma Farm Bureau, an organization that is in favor of SQ 777. His main concern is not overactive legislatures, but he did say a “yes” vote means that future legislation would need to be in the best interests of Oklahoma. However, his strongest warning is directed not at legislators but at special interest groups.

“We are seeing agricultural practices being pulled off the table all over the U.S. as the Humane Society, PETA and the Sierra Club push for changes,” he says. “When these organizations pushed for larger cages in California under Prop 2, the chicken industry simply put fewer birds per cage to compensate. Production fell as a result and people ended up buying imported eggs. The legislation protects consumers, not just farmers and ranchers.”

Edmondson said one of the main problems with SQ 777 is that it is missing some very important verbiage: “subject to reasonable legislation.” In other words, the “right to farm” could not be infringed under the banner of “reasonable legislation,” a bedrock of lawmaking, according to Edmondson.

“No out-of-state special interest lobby can come in and tell us how to farm.”

Mason Boley, a farmer from the Perry area, said he supports SQ 777 because he believes the bill protects farmers. “No out-of-state special interest lobby can come in and tell us how to farm,” Boley says. “If you want organic, backyard grown or more traditional farming, the bill protects all of us and gives consumers a choice.”

Boley’s family has farmed for five generations, and while their 4,000-acre farm is not the stereotype of a family farm, three generations are alive and farming the land now. “Some people look at us as a large farm, but we are a family operation,” he says. “Some of the land is in an LLC, so we’re sort of incorporated. Mainly, I tell people we have too much land when we’re fertilizing and not enough when we’re harvesting.”

As to whether these special interests have shown up in the state to wreak havoc yet, the answer is certainly no. All sides will admit that Oklahoma isn’t exactly ground zero for liberal causes, and as Dunnington points out, “We’re not California.”

“Oklahoma already has the right to farm,” Dunnington says. “As for support for the farmers, even my Democratic colleagues had a hard time understanding why I voted against the bill. ‘Why are you against farmers?’ one of them asked me. I had to explain that just because something says ‘right to,’ is not a guarantee of protecting farmers’ rights.”

In mid-July, the Oklahoma State Supreme Court agreed to retain a lawsuit brought by Dunnington and others challenging SQ 777 on a number of grounds, including a violation of the state’s one-issue rule for legislation. Filings were due July 28, and the Court was expected to set a date for arguments after that. Dunnington said he was pleased that the case was going to the Supreme Court.

“It’s where we wanted it to go all along,” he says. “When the district judge dismissed it without even hearing it, we knew that we would have a chance to get it in front of the Supreme Court on appeal.”

“My office and Supreme Court Justices are being forced to rush through the process, when the challenge could have been filed more than 200 days ago,” Pruitt says. “But, it is not surprising the Supreme Court decided to retain the case. We appreciate the court’s willingness to retain the case and resolve the issue with dispatch.”

Edmondson is not a plaintiff in the case, but said he is watching it with interest and hopes Dunnington and the other plaintiffs are successful.