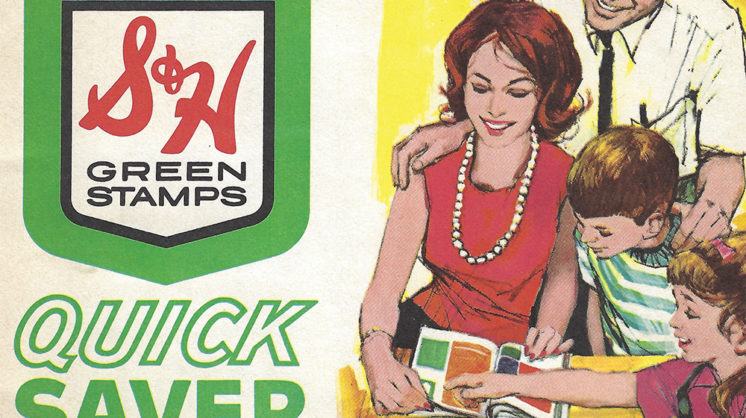 On the west side of N Pennsylvania, across the street from Penn Square Mall, sits a nondescript little building. Today it is home to Pier One Imports, but a generation ago it was the catalog showroom and redemption center for S&H Green Stamps.

Mid-century housewives would save their green stamps and paste them in a little book – and when they had enough points saved, they could trade in those books for any item in the catalog.

“My sister Sheryl and I always loved helping our mom fill out the books,” says Oklahoma City resident Lynn Mallett. “That was so much fun taking the stamps, licking them and watching the book slowly fill up.”

S&H stood for Sperry and Hutchison, who founded the company in 1896. Gas stations, supermarkets and other participating stores gave shoppers a series of stamps based on how much money they had spent. The stamps, which were green in color, came in denominations of one, 10 and 50 points. Once a book was filled, it could be redeemed for items in the S&H catalog.

“We would spend hours looking through that catalog,” Mallett says. “And the anticipation of what we could buy! They had so many things, and I remember mom getting a little transistor radio, an alarm clock radio – and it seems like we even got a small portable TV one time. That must have taken a lot of stamps.”

The S&H Company saw its peak in the 1960s, and its rewards catalog was touted as the largest publication in the United States. They also proudly claimed to issue more stamps than the U.S. Postal Service.

By the 1970s, recessions hit the company and fewer stores were issuing green stamps. The company went into decline and was sold in 1981. Today, a subsidiary company is owned by the Sperry family and offers an online version of green stamps called “Greenpoints,” but unlike the heyday of the 1960s, the program is only available at a few select stores.

“Those were the days,” Mallett recalls. “Times change, but occasionally as I’m driving down Penn, I’ll glance over at Pier One and remember those days so long ago. Mom and Sheryl and I pulling up in front of the Green Stamps store, trading in our books and heading home with something really nice. Yeah, those were the days.”