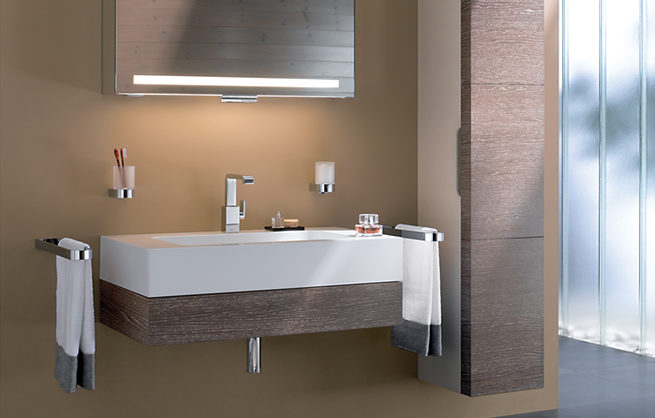 Harvest gold appliances in the kitchen complemented the white Formica countertops accented with gold flecks. Down the hall, the main bathroom sported a cutting-edge tile combination of hot pink and turquoise. And in the master bedroom, mint-green walls highlighted the blonde bookcase headboard with matching dresser and nightstands.

This home could have been inhabited by any number of “Leave it to Beaver” or “Brady Bunch” families. But what was once the epitome of style and elegance has a tendency to fade over time – some trends more quickly than others.

Today’s families often approach the design elements of their homes with an “anything goes” flair. And sometimes things that were old (like that pink and turquoise tile or gold shag carpet) come full circle and are embraced all over again.

Winters grew up in a traditional home with early-American and French Provincial furnishings. “Remember the plastic slip covers?” he says with a laugh.

“The area I grew up in was very traditional, but I really enjoy all aspects of interior design. I set no limits,” he said. When it comes to home interiors, he’s noted a trend towards a more minimalist aesthetic: “Less clutter, using fewer and larger pieces to carry the space. We are seeing more transitional pieces being sold along with the popular mid-century modern.

“There are also lots of hardwood floors with the shag rugs … a great deal of texture. We are seeing brighter open spaces, cleaner lines and outdoor living areas,” he added.

Little details can often transform a home from humdrum to happening. Faye Norton at Designer Hardware by Faye says she has seen many trends rise and fall since she first started her business over three decades ago.

“Antique brass was the rage in the ’70s,” she said. “In the early ’90s the manufacturers discovered a process that protected the brass from tarnishing, so polished brass came back in power. Then in the late ’90s, satin nickel took over the lead and it is still the most popular finish even today. However, polished brass un-lacquered is now a favorite among the interior designers doing multi-million dollar homes.”

Norton says the design industry is a difficult one in which to work, but staying on the cutting edge of the latest trends is very important. Colleague and fellow designer Garvin Boyd has worked with Norton for years, and recently took over her business, continuing on the path she started in 1982.

“Just like the ‘hot color of the year,’ there are the up-and-coming designs that have yet to hit the market,” Norton says. New and innovative designs are helping transform old favorites into state-of-the-art features. For example, “In the ’80s and ’90s everyone had to have a whirlpool tub. But due to ongoing issues with algae in the jets, the industry came out with air tubs. Clients loved it because they could still have a spa-like feature in their home.

“During the ’90s the French door hardware in Old Iron skyrocketed to the top. All the custom designers wanted the Bouvet French look,” Norton said. “It had 100 percent growth for about six years, then the market was flooded with inexpensive knock-offs. Today I rarely sell the French look, even though in my opinion it was, and still is, beautiful!

“When I first started in the business choices were not as abundant,” Norton added. “I think the biggest change from 1982 to 2014 is the consumer. Today’s consumer is more educated on the pieces they want and the style they are going for.”

Oklahoma City construction mogul Bill Gumerson of Gumerson and Associates comes from a long line of builders and has seen firsthand how styles have changed.

“My grandfather was a residential developer in Enid from the early 1920s to the 1950s, and my dad was an architect, so design and building was in my blood,” he said.

“When I started the 1950s were behind me, so mid-century modern was out of vogue by then,” Gumerson said. “Oklahoma City had a multitude of styles, from Mediterranean, ranch and traditional. Then French Country and old world European was strong in the late ’80s through the early 2000s. Now contemporary and early 20th century industrial have become popular, but old world design is hanging in there.”

Being able to adapt and reinvent yourself is often the key to staying relevant, and Gumerson says it helps to bring in staff with fresh ideas and keep up with technology.

“Communication with our clients and subcontractors has evolved from a roll of dimes for the pay phone at 7-11, to the pager and then to the iPhone,” Gumerson said. “Today, thought exchange is faster than ever via text and email. Access to the internet to research design and materials has allowed our clientele to become more educated and in tune with the details of their project, and our standards must be higher than ever.”

Likewise, Oklahoma City architect Rand Elliott says when designing a home or building, he uses integrity as his guideline. “I do not follow design trends,” he said. “I am part of the ‘Baby Boomer’ generation, and came of age at a time when you were allowed and encouraged to think for yourself.”

Elliott says he got the design bug at an early age. “My mom had great taste, and her sister, my Aunt Hazel, designed and sold hats in Paris in the 1930s. So I think that is where the design gene came from. I knew from about age eight that I wanted to draw and design. I have never wanted to do anything else,” he said.

After receiving his degree in architecture from OSU, Elliott and friend James Pickel started a business together in 1976.

“One of our first projects was a remodel job. We tackled it as if we were renovating the Empire State Building,” he laughed. “I did so many things in the beginning – wine cellars, restaurants, parking structures. All of that cross-pollination was very important in developing how I work today. I love variety and I do not do the same thing twice. It’s exciting and new and fun every single time,” he said.

“Whether it’s Lyric [Theatre] or Chesapeake, I want my work to be just as fresh 20 years from now as it is today. Ultimately my goal is to avoid the trendy, and design a structure that is now and forever timeless.”