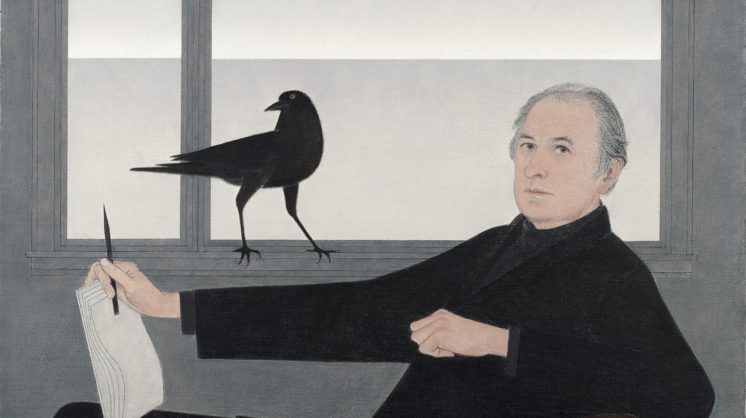 Self-Portrait by Will Barnet

Did you know Samuel Morse, the same man who brought us Morse Code and the electric telegraph, was also a prolific painter? In 1825, Morse and 14 of his artistic peers created The National Academy of Design. This is an honorary society, created for artists by artists, whose mission is to “promote art and architecture in America through exhibition, education, and research.” National Academicians are nominated and selected annually by the Academy, with a membership totaling 450 artists. The National Academy of Design’s collection consists of a representative “diploma work,” as well as a “diploma portrait” which can either be a self-portrait or done by a fellow artist. The outstanding exhibition For America: Paintings from the National Academy of Design features 99 paintings from this collection over the course of 200 years. Curator Catherine Shotick noted that about 60% of this exhibition now displayed at the Oklahoma City Museum of Art features pairings of artists’ diploma work with their portrait work.

For America is divided into five sections, displaying some of the most notable American painters’ finest works between 1810 and 2010. The sections are broken up chronologically and offer a glimpse of how the artist viewed America.

Shotick had this to say on the paintings: “Something that makes this collection interesting are the stories that go along with the paintings, that depict the differences of what the artist portrays and the stark reality of what was happening.” For example, Shotick mentioned the contrast between a painting by Albert Bierstadt in 1865 and the accompanying label with a quote by Jaune Quick-to-See-Smith, a member of the Confederated Salish and Kootenai Tribes and the first Native American painter to become a National Academician in 2011. The painting depicts an idealized American West landscape, completely void of any man-made structures. Quick-to-See Smith’s quote, however, informs the viewer that at the same time, a mass genocide of Native American people was happening on the same land.

Shotick continued, “For America follows America’s trajectory, as paintings from the 1960s on to present day become more diverse and representative. The first African American (Henry Ossawa Tanner) was accepted in 1927, and it took 40 more years for the second African American to be accepted in the sixties (Hughie Lee-Smith, 1967).” The first female artist joined the Academy in 1942, and there are 16 female artists represented this exhibition.

This presentation isn’t just for art lovers, however; it’s a testament of American history through the lens of American artists. As Shotick said, “As you walk through the exhibition, it changes. It’s almost like a living exhibition, where you walk in and get portraiture and landscapes, and then the themes are changing and evolving—very much like America has.”

For America opened Nov. 6 and runs through Jan. 30 at the Oklahoma City Museum of Art. For tickets or more information on programming, click here.

Juneteenth: The Destruction of Slavery is Sunday, Dec. 5, 5-6:30pm; discussing the newly commemorated federal holiday and the final abolishment of slavery.