Steven Paul Judd and Art through a Native Eye - 405 Magazine 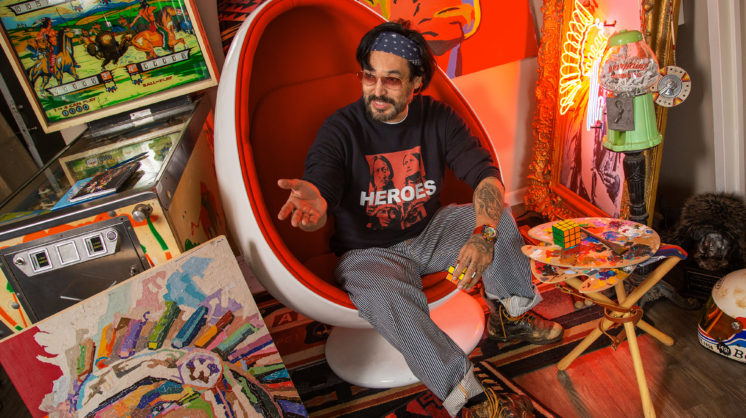 Judd's home is not his workspace, but his work overflows into his home, a perfect metaphor for his brimming creativity.

Success can be a little difficult to measure sometimes. “I won an art contest when I was in second grade, but how well can you really draw in second grade?” Steven Paul Judd asked, rhetorically. “Maybe my mom knew the teacher, or she had some kind of hookup.”

The humor and clear-eyed evaluation of circumstance are hallmarks of what Judd, a Choctaw artist, does in his work. But just because something doesn’t really make sense, doesn’t mean you can’t take something from it. Like that art contest.

“Someone told me I was really good at drawing,” Judd says, “so I kept drawing. I had one art class in high school and maybe one in college, but I kept trying because I believed that teacher.”

Judd, the son of Methodist ministers, was born in Lawton and raised in Oklahoma. A stint in Los Angeles writing for television ended and so did his vagabondage, and he returned to Oklahoma. But his love of travel remained, so he chose OKC to be closer to the airport. That’s really his answer; he delivers it with uninflected honesty and no apology for the explanation not being more interesting. I asked; he answered. It’s refreshing, and not at all what you’d expect from an artist whose work is fascinating because it’s so funny, ironic, tragic and inspired.

“When I got back from L.A., I was looking for Native pop art,” he says. “I couldn’t find anything that I liked, so I decided to make my own.”

Today, his apartment is an externalized metaphor for his creative imagination: bursts of color, corners full of projects, tables strewn with Rubik’s cubes and Zippo lighters – both are being modified into pieces of functional pop art – acrylics adorning the walls, a stuffed bison head staring at visitors from a living room wall, a pinball machine with Native warriors on horseback, a hat collection that is a combination of practical headgear and wearable art, sneakers, gewgaws, fabrics and just too many things to categorize. To talk to Judd about art is to jump from one instantiation of artistic imagination (the plastic bunny topiary on the balcony) to the next (a six-episode, limited series script he’s writing for a major streaming service) to one seemingly unrelated (giant dice for a casino opening in Durant). He has an apparently inexhaustible reservoir of creative energy and imagination.

“I know I hit the zeitgeist when I started creating my own art,” he says. “I was making things that people were looking for right then.”

While that is certainly true, it fails to underscore that the kinds of work he does are desirable in other artistic climates, too. He’s a “Trojan horse” artist, and there is always room for the artist who creates what he loves, but also manages to poke and prod and challenge at the cultural touchpoints we all have difficulty talking about. It’s certain that for most our history Native pop art imagery was created by and controlled by non-Native creators: film, painting, television, etc. Part of Judd’s task has been to excavate those images and then reify them with messages both funny and powerful. On one of his living room walls is an acrylic image of an iconic Native chief with the words, “I loved America before it was called America.”

“Imagine growing up and in every movie, television show and ad featuring people who looked like you and your family, they were only shown in historical context,” Judd says. “It would be like white people were only portrayed as Pilgrims. It’s weird. Most of the depictions of us were embarrassing, but I also get embarrassed when people tell me I’m wrong, so I want people to see the images and realize on their own that they had something to learn.”

Excavating those images means updating them, too, bringing depictions of real Native people into the pop culture mainstream, so television and streaming make sense as areas of intense focus. The series he’s writing features a Native American actor in the lead, playing a Native American – a combination rarer than you’d expect.

As the dice indicate, Judd is also working on large-scale installations, a new thing for him. One series will feature Native dancers with paint on their feet dancing out motion art on canvas. Another is a large-scale ledger art project, an updating of the 19th century form named for the ledger book paper Native artists used to extend the work they’d originally done on animal hides. Again, there is no end to Judd’s creative stream, and any object can become a piece of art in his mind and hands.

“Honestly, I’m creating art for my 12-year-old self,” he says. “I wanted cool stuff, too – skateboards with Native imagery, action figures, sneakers – what 12-year old doesn’t?”