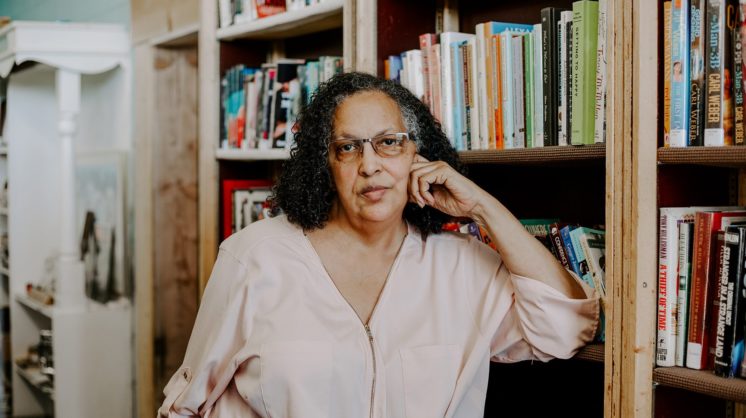 Camille Landry sees the power in words. Growing up, she spent most of her waking hours in a library, and she said she tried to move into her local branch when she was a child in Chicago.

“I didn’t understand why I had to go home at quitting time,” Landry says. “It was my favorite place, and I spent a ridiculous number of hours there as a child. I’ve got a lifelong love of books, and a local, black-owned bookstore was a really important and formative place for me growing up, you know, as a high school and college student. So, it’s always been important to me to have a place like Nappy Roots Books in my life.” 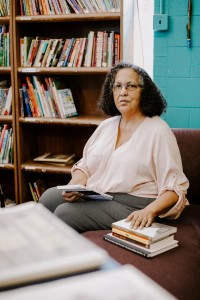 Nappy Roots Books, 3705 Springlake Drive, started when a friend was brainstorming projects for Landry, a lifelong activist. He asked Landry what she loved, and when she answered “books,” he told her she should open a bookstore. Landry pulled some books from her own shelves and started the first Nappy Roots Books location at the New Black Wall Street Marketplace, a now-closed merchant collective on NE 23rd. When that establishment closed in 2018, Landry sought out a permanent location dedicated to her collection of black authors.

The new location opened in 2018 on Juneteenth, the anniversary of black emancipation from slavery, and Nappy Roots Books has since become a nexus point for education, entertainment and the progressive movement in Oklahoma City. For those who need help reading, Nappy Roots offers literacy classes at every level, and teaches with books that relate to the black experience.

“Well, it is critically important that young readers – young people who are learning to read and everybody else who reads – to see themselves reflected in the material that they read; not only reading for information, but also reading for pleasure,” Landry says. “It is often the only way you get kids interested in reading … if they see themselves on that page. And that’s something that often does not happen to a great degree in a school setting.” 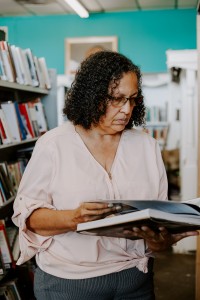 Indeed, that kind of representation can be rare in public schools, where books are selected for mass consumption with few specific cultural reference points. But Landry points to a more insidious problem: historically, the books sometimes were not there at all, even in AP (advanced placement) classes.

“My daughter attended a magnet high school. She had near-perfect ACT scores,” Landry says. “I mean, she was a stellar student. She never had a history book for a solid year of world history classes. There was never a textbook. These were AP classes in a magnet high school. What do you think she would have gotten in an ordinary class?

Those problems have existed nearly as long as Oklahoma itself. In his doctoral dissertation A History of Black Education in Oklahoma, archived by the Oklahoma History Center, Leonard Cayton wrote that until the 1950s, outdated textbooks were sold to black schools at full price, ensuring a systematically substandard education for the state’s black students. So, for Landry, opening Nappy Roots Books was a mission – and as she pointed out, starting a bookstore in the 2000s is hardly a get-rich-quick scheme. Just 20 years ago, the greatest threat to independent bookstores were the literature megastores such as Barnes & Noble and Borders. Now, in the age of Amazon and coronavirus, anything brick-and-mortar is under constant stress.

Activism in the OK

In the wake of George Floyd’s death in Minneapolis and the rise of Black Lives Matter protests throughout the country, Nappy Roots Books has become somewhat of a home base for progressives wanting to expose inequality and injustice in law enforcement.

Today, Landry is motivated by the needs of current and future generations to experience true equality under the law, and by the current climate of police brutality and how it affects people such as her 16-year-old grandson, who recently told her that he does not want his driver’s license for fear of being pulled over.

“He’s afraid he’ll die if he drives,” she says. “I mean, think about that. Do you remember being 16? That’s all you want. … It means adulthood. It’s a rite of passage, really, in many ways more significant than graduating from high school. The kid didn’t want to drive.” 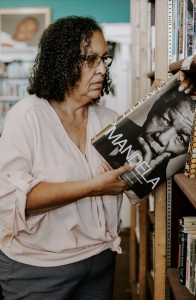 Through the bookstore and her continued activism and advocacy, Landry hopes to energize people to change the system, so that people can feel safe in their communities and in this country.

“What has to happen before change begins is that people have to say, ‘You know what? Somebody needs to do something, and I’m somebody,’” she says.