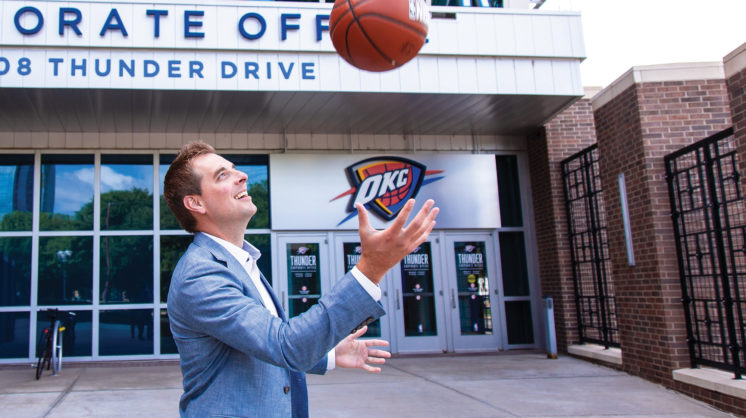 Will Syring is the vice president of corporate partnerships for the Oklahoma City Thunder, a position he started in February 2019, after leaving a global sales role with the Chicago Bulls. The native of Stoughton, Wisconsin, worked in Oklahoma before, from 2010-2012 with Learfield Sports at the University of Tulsa. His wife, Leslie, is from Owasso, and the two have a son and daughter. 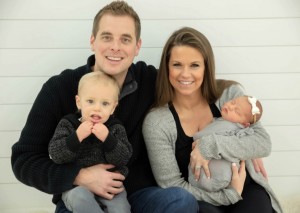 “I went to the University of Wisconsin – Eau Claire, a (Division III) school, but the only sport I stuck it out through was intramural softball,” Syring says. “I played basketball growing up, and I think it’s important to mention I made the A team, but I quickly learned in college that if I was going to make a career in sports, it wouldn’t be playing.”

Syring obtained a bachelor’s degree in business administration, and then took his first post-college job near Melbourne, Australia, as a business development manager for the Kilsyth Cobras of Australia’s National Basketball League. The gig at Learfield followed, which put him in Tulsa and Corvallis, Oregon (Oregon State), and then it was on to Chicago.

“I was happy in my position in Chicago,” Syring says. He had received word from a former Learfield coworker about the opening in OKC – and yes, there are job postings for NBA executives. “I thought it would be good to go through the process, even though I was happy with my role at the time. I always respected what the Thunder had built, so I wanted to hear them out.”

After a few months of conversations with Thunder executives, Syring got on a plane to OKC to talk seriously about the offer. “I was so impressed with Danny Barth and Bryan Byrnes – their leadership, thinking, and work on and off the court – and with the intentionality the organization brought to their brand, their work in the community and everything they do. Ultimately, I decided I didn’t just want to be a part of it; I needed to be a part of what they’re building.”

Syring has worked in sports his whole career, and he said he believes strongly in the positive impact professional sports can have on a community, both the immediate city where it’s located and the surrounding areas. It’s not just the locals who attend games, follow the team, buy merchandise and support the brand. The reach is literally global. 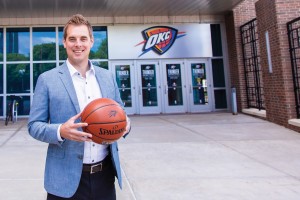 “Sports galvanizes a community,” Syring says. “It brings them together, and I think here in Oklahoma, we have a really special story. The city has seen an uneven amount of tragedy, and if you go back to what happened 25 years ago, you could probably draw a direct line from that horrific event to the renaissance in this city that led to an arena that led to a franchise relocating here. OKC has proven they’re a viable market, and it’s an amazing thing to be part of something that means so much to a community.”

Syring’s overall job is to manage the advertising and marketing opportunities – signage during the games, television material, logo on the jersey, etc. – via the Thunder. He oversees sales, service and strategy, including corporate partners that wish to leverage the Thunder brand for things like community events. He and Leslie have learned to love that community.

“Moving to Oklahoma City has really changed my perception of the city,” he says. “I didn’t know as much about it as I probably should have. We love Chisholm Creek, Auto Alley and Midtown, and we’ve learned the Oklahoma Standard is a real thing.”

1 Weekend Roundup: May 13-15
2 10 Sushi Joints You Need to Try Now
3 Home and Garden Tour in Historic Miller Neighborhood
4 The Unexpected Mix is Key for OKC Home