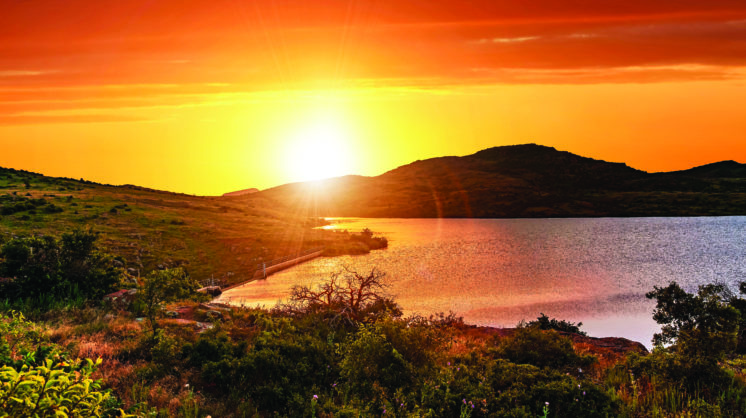 The Wichita National Wildlife Refuge is a true Oklahoma treasure, featuring spectacular scenery, interesting animals and room to ramble. With 15 miles of designated trails and wilderness areas for more intrepid and experienced hikers, the area accommodates all levels. 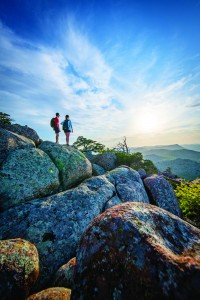 One of the most popular destinations is Elk Mountain. Jack and Carolyn Warner of Edmond and their three sons have trekked the Elk Mountain trail several times over the years.

“The views are incredible,” Carolyn Warner says. “The boulders on the top are the size of cars. It’s where the world stands still. Even when there are other people at the top, everyone is quiet.”

Her best advice is to wear good hiking shoes, and most importantly, go before you go. There’s a port-a-potty at the trailhead, but that’s it. Rated moderate, this trail is not for everyone. Cell service is not reliable here, so be sure you download a map beforehand.

The Charon’s Garden Trail does not go to the Elk Mountain summit, but passes Post Oak Falls, Boulder Rooms and Valley of Boulders. There are some low spots on the trail and water crossings, so proper footwear is important here, too.

Dr. Mike McShan of Oklahoma City is a frequent hiker, often exploring off marked trails. If you plan on doing this sort of hiking, he recommends a Garmin Inreach Explorer Plus. This device, though expensive, should keep you safe. It features two-way satellite communication, and has maps, tracking, texting, an SOS signal and more.

As for me, I stick to the baby trails. The Quanah Parker EE Trail is perfect – a nice stroll around the lake on a paved, accessible path. I’ll leave the mountain trail to the elk.
For more information, visit fws.gov/refuge/Wichita_Mountains.

Where the Buffalo Roam

By the late 1800s, the American bison was almost extinct on the plains. In 1905, President Theodore Roosevelt designated this area, originally a federal forest reserve, the Wichita National Forest and Game Preserve. That same year, the New York Zoological Park offered 15 American bison as a foundation herd for the reserve. In 1907, six bison bulls and nine cows traveled by train, then wagon, to the refuge. No bison had grazed there for several decades.

Today the herd is maintained at between 550 and 650 animals. Since 1907, more than 10,000 animals have been sold or donated to keep the herd at an ecologically healthy size.

Hoodoos and Hauntings
Palo Duro Canyon, about 25 miles south of Amarillo, is the nation’s second largest canyon at approximately 120 miles long and 600 to 800 feet deep – the Grand Canyon of Texas.

The canyon had long been a refuge for Native Americans. In 1874, the U.S. attacked their winter camps, burning their dwellings and supplies and capturing 1,400 horses, of which the majority was later destroyed. Deprived of food, horses and other resources, the surviving Indians walked many miles back to reservations in Oklahoma. Cattlemen took over the territory, with approximately 100,000 cattle roaming the canyon floor.

Today, Palo Duro Canyon State Park consists of more than 118,000 acres of the canyon in two counties, and 25-plus miles of trails offer a variety of challenges, changes of scenery and haunting history.

The most popular trail in the park is Lighthouse Trail (5.75 miles round trip), leading to the park’s most recognizable image, a 310-foot formation that has been designated a National Natural Landmark. The trail is rated moderate and can get crowded – horses are also permitted on the trail.

Former University of Oklahoma President Dick Van Horn and his wife, Dr. Betty Pfefferbaum, have hiked this trail on a number of occasions.

“This is the nicest trail with the most interesting features,” he says. “The trail takes you behind forms you can see from the road.”

This is Texas, and summers can get really hot. Van Horn suggests summer hikers start early in the morning. This time of year, the shorter, easier Sunflower Trail offers a shadier option. There’s also a half-mile Nature Trail best for families with small children.
For more information, visit palodurocanyon.com.

Roughing it Royally
Options for accommodations include four cabins in the state park or motels in the nearby cities of Canyon (15 minutes away) or Amarillo (25 minutes away) – or you can perch on the rim of the canyon and enjoy the luxury cabins at Doves Rest Resort.
The 12 Doves Rest cabins feature full kitchens, hot tubs and patios with grills, plus lots more. They sleep two to seven guests. Enjoy the magnificent landscape and an unbelievable night sky. Visit dovesrestcabins.com for more information.

Outlaw Escapades
Robbers Cave is great for a weekend getaway. With a nice state lodge and six hiking trails, it offers variety in Oklahoma’s Sans Bois Mountains. The most popular trail is the one to Robbers Cave. Three-quarters-of-a-mile long, it is described as moderate to steep grade – i.e., not for small children. There’s a steep bit at the beginning of the trail, but steps cut into the rocks make it manageable. The cave itself is a bit anticlimactic; it’s basically a hollowed-out area under a big, overhanging slab of rock. The view from the top of the trail is, however, spectacular. 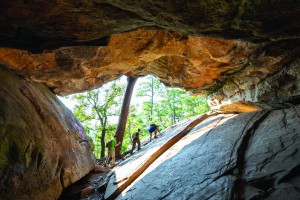 Bad Hombres in the Backwoods
Before statehood, eastern Oklahoma was a get-out-of-jail-free zone for felons escaping the law by hightailing it into Indian Territory. The Younger Brothers, the James boys and Belle Starr had hideouts in these hills. Tales of the outlaws who used Robbers Cave are probably as much fiction as fact – however, the location is close to both the old Texas Road and the California Road, and its secluded nature made it a logical roost for robbers and ruffians.