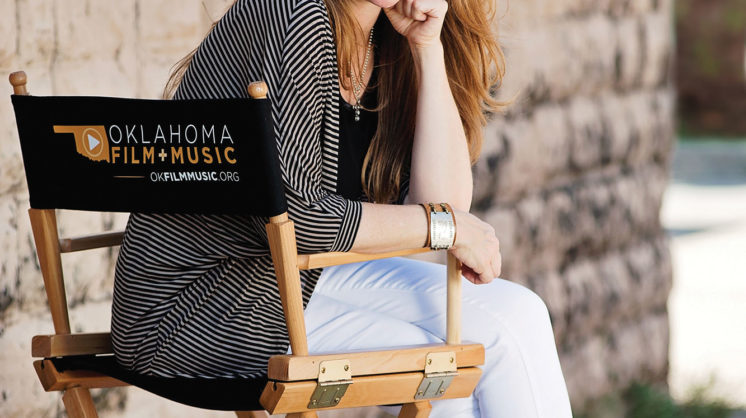 Tava Sofsky is a rainmaker. Whether she’s producing a Hollywood blockbuster, renovating a historic theater or recruiting a major movie to film in Oklahoma, Sofsky is the person who pulls everything together in a way that makes investors, audiences and filmmakers say yes.

As Director of the Oklahoma Film + Music Office, Sofsky leads the charge to get feature films and television shows produced in Oklahoma. Along with her small but very effective team, she meets with everyone from major studios in Los Angeles to independent filmmakers at Sundance and other festivals to explain the advantages of bringing their productions to Oklahoma. She also provides networking and training opportunities to help local filmmakers, and manages the film rebate program for companies filming in the state. It’s a challenging job that requires a vast array of skills – luckily, it’s a job she’s been training for her entire life.

“Growing up, my parents owned a movie theater in Konowa called the Liberty Theater,” Sofsky says. “My fondest memories were selling concessions, watching Jaws about 5,000 times and cleaning up the theater after everyone left – because my brother Zac and I got to keep all of the money we found on the floor.”

After earning a B.A. in film and media studies at OU, she moved to Los Angeles – “when I graduated, there were no film jobs in Oklahoma” – and reached out to producer Doug Claybourne, who had grown up in Tulsa and produced Rumble Fish there for Francis Ford Coppola.

Under Claybourne’s tutelage, Sofsky spent the next decade producing and executive producing major studio movies such as The Mask of Zorro, Jack and The Fast and the Furious. Sometimes she would spend six to nine months working on a project such as The Incredible Hulk, only to see it go back on the shelf for another decade. But when the projects received a green light, Sofsky would step into the producer role on set, serving as the boss for the massive productions.

“My favorite production was definitely The Mask of Zorro,” says Sofsky. “It was my first time as producer. We were in Mexico for several months, I met and got engaged to my husband Brian during filming, I worked closely with Anthony Hopkins and Antonio Banderas and the film made $250 million at the box office.”

After more than a decade in Los Angeles, Sofsky and her husband decided to move to Florida to make their own films, and wound up running a small-town movie theater just like her parents. But after two kids came into the picture, she knew it was time to return home.

“I am so grateful to be back in Oklahoma now, helping grow and develop the film industry here,” she says. “My favorite part of this job is meeting with out-of-town producers and hearing them gush about our great crews, beautiful locations and film-friendly environment.

“In the future, I hope to build on that by adding sound stages, an Oklahoma Film Academy to train the work force and extended incentives to help us land a major television series. I want to make sure that Oklahomans do not have to leave the state to pursue their dream of making movies.”

This is the 40th anniversary of the Oklahoma Film + Music Office, and it’s in great hands. We are so fortunate to have a consummate film professional like Tava Sofsky leading the charge.