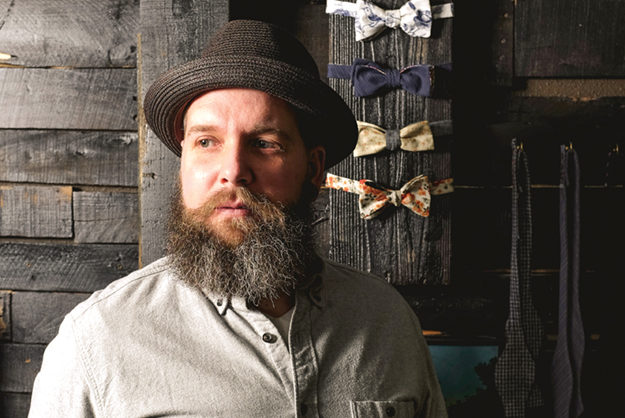 Even more, we love men who have the moxie to wear bow ties. And if there’s one time that lends itself to bow ties, it’s the holiday season – although this jolly splash of men’s finery deserves a year-round celebration at the top of every “rousing first impressions” list.

Taylor Hanna, owner of The Clad Stache in Oklahoma City, became so enamored with the accessory that he quit his day job to devote an entire career to making custom bow ties, and their immediate popularity has made him a very busy man. We convinced Hanna to loosen his tie this month, long enough to tell us how a guy who once turned his nose up at bow ties became the guy whose name is quickly becoming synonymous with them.

Are you a native Oklahoman? Yes. OKC is my hometown.

I’m always fascinated to hear how people find their way into their jobs. How does one wake up one day and say, “The day job was fine, but think I’ll make bow ties instead”? Well, it actually began when my wife, Jennifer, and I were going to a formal wedding and I realized I’d left my tie behind. We stopped at my parents’ house and my dad offered to loan me one of his bow ties. He’d worn them a lot before he retired and I’d always kind of scoffed at them, but I needed a tie.

Desperate times, desperate measures. I put on one of his bow ties and checked the mirror and thought, ‘That’s not bad!’ From that moment on, I was sold. I started buying my own bow ties here and there, but I just couldn’t find exactly what I wanted, so I decided to make my own.

Because you had a few extra bolts of fabric lying around? I would go to thrift shops and find pieces that had great fabric that I couldn’t find anywhere else. Also, my dad gave me a jacket from one of his suits and I have a tie made of that material.

Nothing says “custom” like that! How did you make the leap to a full-time tie gig? My business took off really fast. I was wearing my own designs at work and when I’d go out. People kept asking me where I got my tie. When I told them I’d made it, everyone would say, ‘You should sell those!’

I’m guessing that the bow tie’s popularity waxes and wanes like any other fashion accessory. Of course, although there are a lot of men who wear them daily.

Last year, Slice sat down with Judge Jerome Holmes (10th Circuit of the U.S. Court of Appeals). He confessed to owning about 60 bow ties. You guys need to know each other. I’d love to meet him.

Are all of your ties handmade? Yes. And right now, that means handmade by me.

How long does it take to make one tie? A bow tie takes one hour, 15 minutes. A necktie takes about one-and-a-half hours.

Have you ever seen someone wearing one of your ties? Yes – the first time that happened was about seven months ago and it was surreal. I’ve since become the ‘official bow tie maker’ for the Sugar Free Allstars, a Grammy-award winning, arena rock duo, and my ties have made a debut on the MTV red carpet.

What’s the best part about this job? Being around creative and like-minded people. It’s a great creative outlet.

How do you see your business growing in the coming year? I’ll be launching a kids’ line of bow ties, neckties, suspenders and scarves in spring of 2015 called Truman by The Clad Stache. I also make my own recipe of beard oil and cologne that I’ll be introducing in the spring.

What motto has guided your business? We’re small. We’re handmade and that’s how we intend to keep it. We don’t make the norm. We design the unique.

No fear of mass production with The Clad Stache. No! In fact, I will never make more than 50 of any one pattern. I want to create legacy items that stand the test of time and can be handed down.

Editor’s note: The Clad Stache is located inside The Shop on 8th at 3 NE 8th Street, just off Broadway in downtown OKC.