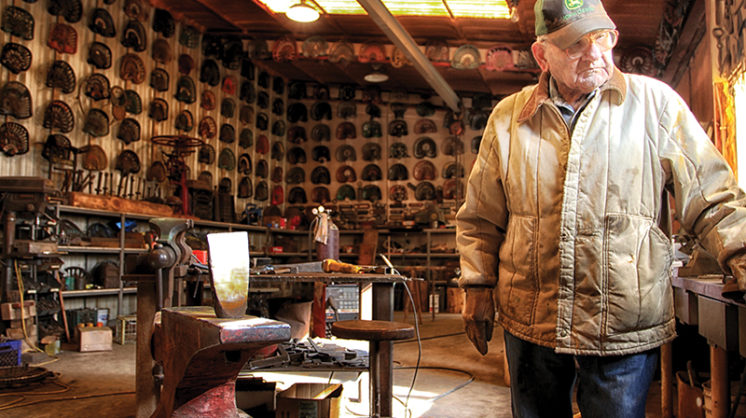 East of the Black Kettle National Grassland, near the county lines of Custer, Dewey and Roger Mills, up and down and up and down a hilly dirt road, is the longtime ranch of Joe and Leah Smith.

It is far enough west in Oklahoma that it looks you might be in the Texas Panhandle, or maybe eastern New Mexico. The Smiths’ picture window frames a horizon rippled by an ancient butte.

There is not a neighbor in sight. But there is no lack of company: Their sons pop in between trips back and forth as they tend to the family’s land, and a caregiver keeps an eye out and cooks up lunch favorites such as fresh livers and gizzards. The Smiths also get visits from further afield. Europe. Costa Rica. Arizona.

Some of the visitors are friends they’ve made over the course of their 63-year marriage. But others are strangers – at least when they arrive. They travel down Hill Creek Road to meet the 89-year-old rancher with the common name and uncommon creations.

Joe Ellis Smith is among the pantheon of self-taught Oklahoma folk artists creating larger-than-life works, including Ed Galloway (1880-1962) and his concrete totem poles in Foyil; Hugh Davis (1909-1990) and his iconic Blue Whale of Catoosa; and Jim Powers (1934-2006) and his junkyard animals in Gage.

Smith’s outdoor gallery is the most extensive and least accessible of them all, found only by venturing off the paved road. His altered farm fences, towering horseshoe trees and painted kachinas, bobbing roadrunners and rotating depictions of spheres, an airplane and an angry tornado, are the result of 60 years of collecting and more than three decades of construction.“Unless you’re there in person, you can’t see the magnitude of what he’s done,” says longtime friend and fellow blacksmith Bob Kennemer, a member of the museum board in nearby Elk City who has watched the Smith sculptures evolve. “I’ve been up there a hundred times, and still see something new every visit.”

The fence line that follows the rolling red-dirt road transforms just before the Smith place. Within the metal panels – each 16 feet long and four feet tall – is a flotsam and jetsam of relics from the farm: tools and bits of machinery silhouetted in artful symmetry and welded into a frieze of suspended animation. 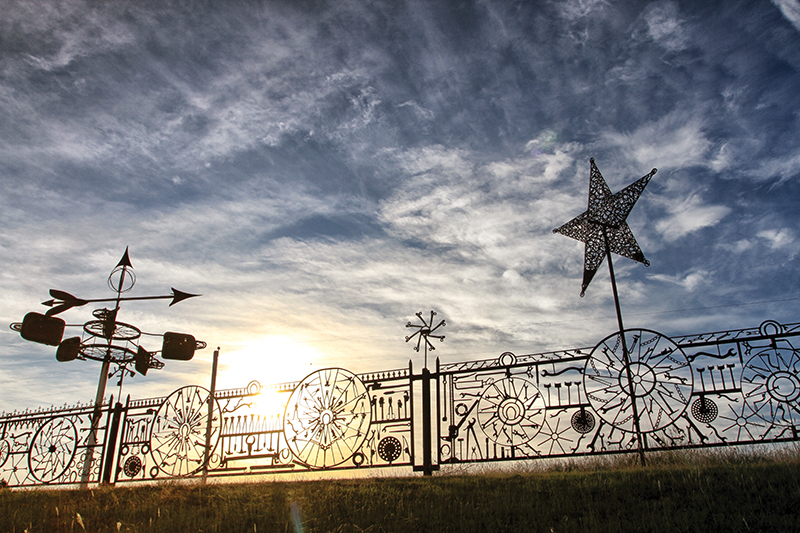 Wrenches are welded between the spokes of century-old hay-rake wheels. Horseshoes and teeth from long-forgotten threshing machines are frozen in place next to sprockets and cogs, marching in formation with pliers and tractor seats, hammers and saws, pulleys and bridle bits, twisted augers, angled axes and open-jawed tongs.

One intricate section is joined to another, and then another, creating a corridor of framed metal friezes lining the quarter-mile long driveway, beginning at the mailbox that’s marked by a 44-foot-tall saguaro cactus crafted of pipes painted sea-foam green.

On the way up the drive, high above the fence line and balanced atop upturned axles and painted poles, is a parade of lucky charms – a heart, crescent moon, horseshoe and five-pointed star – maybe 15 feet across, made of welded horseshoes that create a feel more lace than iron.

The totems are interspersed with enormous weathervanes wearing whirligig collars of radiating shovels and wheelbarrows, a steampunk amalgam of Dr. Seuss-meets-Mad Max angled to catch the wind and spin above the prairie.

“Joe is very unusual,” Kennemer says. “There’s not many people who can do what he does. I can’t say there’s no one else around doing what he does. But if there is, I haven’t met him.”

Smith will walk the property pointing out highlights of his work, but refuses to call them art. He concedes of the installation little more than a modest: “You’re not going to see another place like this in the state of Oklahoma.”

The man who would be the maker

Joe Ellis Smith was born about a mile away from where he lives now, south and west of Leedey, 90 years ago Sept. 1. His family stayed on the land through the Dust Bowl and Depression, using a horse and mules on their tractor-less farm.

“Everybody was so poor. Everyplace. Nobody had nothin’,” he says. “Could buy this land up here, some of it sold for a dollar an acre. Nobody had any money. The people up here north of us – on those hills up there – it never did rain and they never could get their seed to come up. They left for California. But we lived on a place like this, with a creek. The water would get all over the bottom and irrigate it. But it’d run off the hills up there.”

He and his brother and sister – both now in their 90s and living nearby – walked or rode their horse into Texmo for elementary school, and finished high school in Harmon. He enlisted in the U.S. Marine Corps upon graduation in 1944, training in San Diego but not being shipped out in the waning days of World War II.

After returning home, he bought a used Caterpillar D8, spending long hours in the bulldozer’s open cab, through wind and ice and heat, building terraces and ponds for farmers from the Texas state line to Clinton, from Elk City north to Camargo.

“I call myself self-educated through hard work, that’s all we knew,” he says. “We bought a bulldozer, and we run that. But you know, that’s all artistic work too, if you do a good, smooth job in a limited amount of time, don’t work forever on it. Cause when somebody’s paying the bill, they didn’t want you goofing off. So you worked all the time.”

The Smiths raised two boys and a girl, and built their new ranch house on the hill in 1973. As Joe dialed back on his work schedule in the late 1980s, he found more time to experiment in his shop, soldering and welding items he had collected in his travels and at farm auctions. 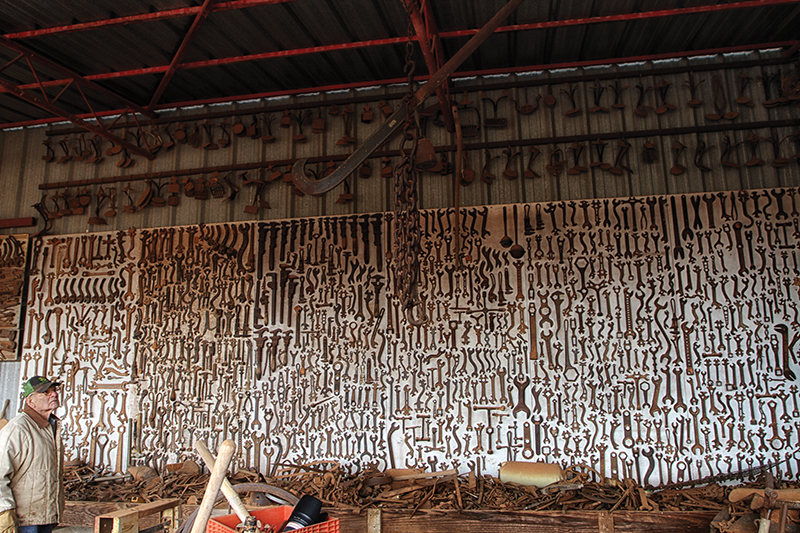 By 1989, he had assembled the first of his farm-tool fence panels, now numbering more than 100, and installed it on his property. “When I first started, I’d put a number on ’em. I got to 14 or 15, and then I forgot my numbers.”

He likes talking about the numbers and dimensions of his work but is reluctant to say much about the vision behind his pieces. For his latest big project, a half-scale biplane, the horseshoes in the wings alone number “seven across times 24 long times four – top and bottom,” a total of 1,344 horseshoes, not including those needed for the rest of the body.

But calling what he does art? He’s not buying it.

The fact that his massive sculptures of a longhorn and a buffalo are front and center at the Route 66 Museum complex in Elk City, and that a couple of his smaller works and fence sections are featured at the Farm & Ranch Museum, pulls no weight. 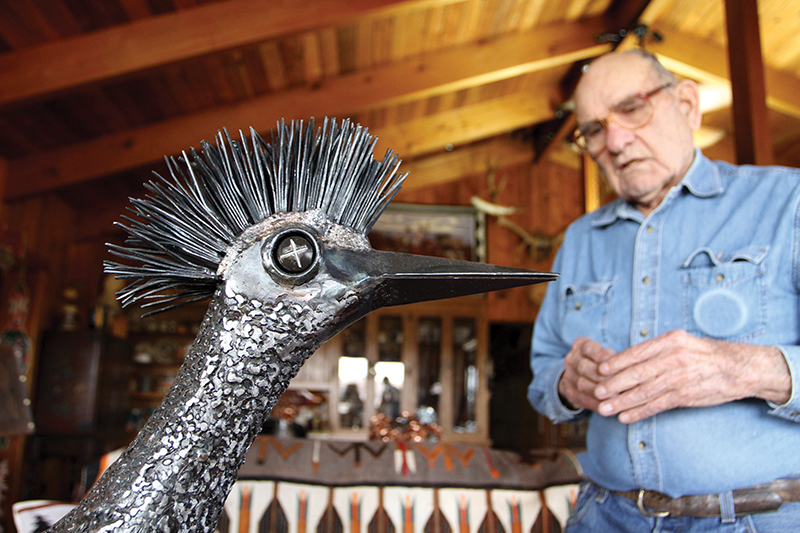 “He didn’t learn. He wasn’t taught,” Kennemer says. “I would say he was born with it. He’s so creative. Just sees it in his mind, and can build it. Joe is the most talented man I know, as far as dreaming things up and then being able to build it.”

With the winter temperature well below freezing, Smith goes out to the shop, its walls lined with meticulously arranged tractor seats and hundreds of vintage tools, and cranks up the heat to get in a few more hours of work. He is slower than he used to be, but keeps moving.

He is tickled – but genuinely puzzled – that the specialist he sees for his lung cancer asked him for a small sculpture. “Why would my cancer doctor in Oklahoma City want me to make him a flower, about that tall? Put it in his windowsill to look at. A fancy doctor like that.” The doctor conveyed good news during his last checkup, and scheduled the next visit for three months down the line.

In the meantime, Smith is pondering starting a smaller sculpture, a jackrabbit. It might be about 30 inches long, something to keep inside. This time, he will avoid the mistakes he says he made with the roadrunner, when he may have snipped the metal tail feathers too short for his liking. But then he shrugs.

“All you can do is the best you can do. And that is it. You can’t go beyond your capabilities. And my capabilities don’t run far enough to suit me.

“The work – I enjoy the work. What I don’t like is all the thinkin’ and figurin’ and worryin’, and you go to bed at night and get all that crap in your head so you can’t go to sleep. ‘What am I going to do next? How I’m going to change that?’ It just circulates. That’s just me. I guess everybody’s got the same trouble.”