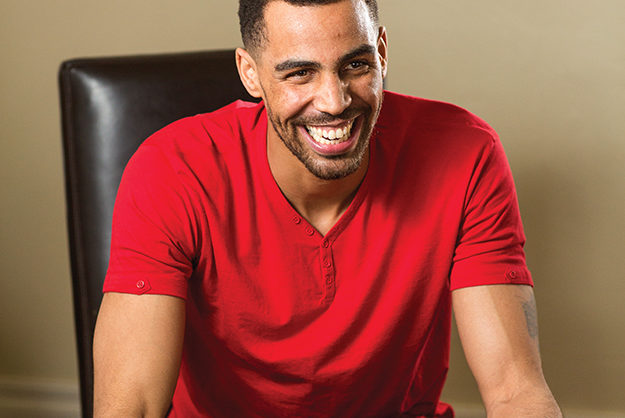 His African name, Thabo, translates as “celui qui amène la joie,” or, “the one who brings joy.” The upside, if there is one, of a mid-season calf injury is that it gave us an opportunity to convince Oklahoma City Thunder defensive man Thabo Sefolosha to slow down long enough for a lively conversation about the game’s best fans, pre-game rituals
and life off the court.

At the end of the happy conversation, we were certain the son of South African and Swiss parents was very aptly named.

You were born and raised in Switzerland? Yes. Vevey, just along Lake Geneva.

Had you been to the U.S. prior to joining the NBA? No, I’d always dreamed of being in the U.S.

What surprised you the most about the U.S. when you got here? How BIG everything is! For me – I’m 6’7”– that was a good thing!

Where did you meet your wife, Bertille? We met when I was playing in France.

You’ve played basketball in several countries and cities. What’s different about the Oklahoma City crowd? If it’s late in the 4th quarter and we’re losing, the fans are still there, on their feet, cheering us on. It’s amazing. I’ve never seen that anywhere else. It’s so much fun to play for them.

Do you have any pre-game rituals? Yes. Since I began in the NBA, I’ve eaten the same thing – chicken – before every game, with fresh-squeezed orange juice. And at some point, I take a nap.

Do you cook? I can make enough things to eat for about eight days! I’m just OK at it. I’ve learned by watching other people. That’s how I learned to drive, in fact.

No Driver’s Ed. in Switzerland? They have it, but it’s terribly expensive. I just practiced with friends.

What do you value most in your friends, besides teaching you how to drive a stick? Loyalty.

What do you think they value most in you? I would hope the same thing. If you’re my friend, we’re going to be friends for a long, long time.

What’s less important than it used to be? Worrying about what people think or say.

What’s more important now? Living in the moment and enjoying every minute.

What do you do to de-stress? To an extent, I’ve learned to live with an attitude of “stay ready” and “give my all.” If I’m doing that, there’s nothing to be stressed about – that’s the best I can do.

What’s still on your to-do list? I’d like to go to South America, Asia and Australia. I love geography and history. I’d like to see some of the places I’ve read about.

Were geography and history your best subjects in school? They were my favorite.

What was your worst subject? German. And math.

What’s your favorite hole-in-the-wall in Oklahoma City? The Couscous Café on North May, just south of 63rd Street.

Early, late or on time? Late.

What philosophy about life do you truly believe? Do what makes you happy. And I tell my kids to believe in themselves.

What about being an NBA player is not so great? The business side of it. And having no control. You’re told where to be, when to be there and what to do at all times. And the traveling is exhausting.

When they make a movie about your life, who should play you? For me as a kid, I have no clue. For me as a teenager, Chris Brown. After that, well, I gotta have my Denzel.

You’re just coming back from a mid-season calf injury. Does that mean you’ve caught up on all the “Springer” episodes? Noooooo! Working through an injury means even more practices, more weight lifting and more drills.

Do you have any recurring dreams? I dream about basketball every night. I also have a dream where I’m climbing something – it can be anything; a rock wall, a hill, whatever – and I get to the very top and look around when I realize, there’s no way to get down.

What does your post-NBA life look like from here? Right now, I just have some ideas down on paper, but I’d like to be an entrepreneur.

Tell me about your foundation in South Africa. It started about three or four years ago in Mamelodi, South Africa. It’s an after-school program for about 140 kids who can come to a safe place and spend time with a mentor, get homework help and have some snacks.

What lessons has basketball taught you? Respect for other players. Respect for authority. Having a purpose. How to envision being good at something. And humility – that’s big because one day you’re on top. The next, you can be at the bottom.