The Art of Animal Adoption - 405 Magazine 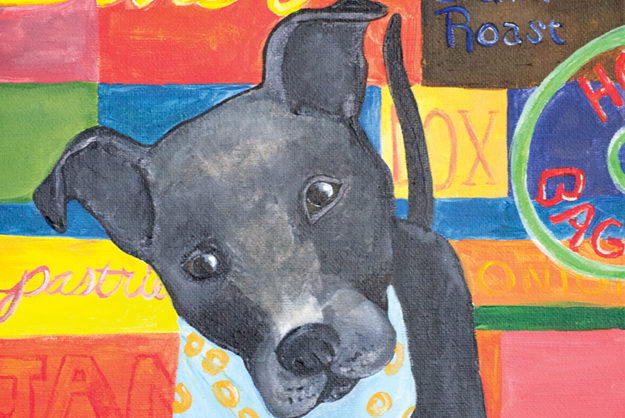 Several years ago my one and only cat of 14 years passed away, and my husband and I began looking for a new fur baby online. After months of looking, we finally found and adopted a beautiful black and white kitty (Wendigo), but I never forgot about the faces and profiles of the other cats we had seen. In fact, I checked back often to see whether they had been adopted. I began to notice that there were some pets who had been at the rescue shelter for months or even longer, so I decided to do something to help homeless dogs and cats find their forever homes.

That was the birth of Sit. Stay. Art! – an art exhibit and sale that pairs artists with homeless pets to help raise awareness and funding for local humane and rescue organizations. Artists select a pet awaiting adoption as the inspiration for their work, which is then displayed and sold at the event along with a placard featuring the pet’s photo and characteristics or background.

Attendees will enjoy complimentary food donated by some of the city’s best restaurants and a cash bar, and some of the sweetly behaved shelter dogs who posed for portraits will be present, so guests are invited to bring their own pets to accompany them as well. This is the only art show in town where people can bring their four-legged friends along for the fun!

Sit. Stay. Art!’s third annual event will take place June 2 at the Individual Artists of Oklahoma gallery on Film Row in downtown Oklahoma City, with all proceeds benefiting Pets and People Humane Society. Longtime Sit. Stay. Art! advocates and animal lovers Dara Wanzer and Jim Roth are honorary co-chairs. Roth, a sponsor since its inception, says, “Sit. Stay. Art! is a wonderful way for animal lovers and kind-hearted people to bring hope to so many animals across Oklahoma and America, who by no fault of their own are without a home.”

“There are so many people who would like to help homeless pets but feel that they can’t because they can’t adopt one,” added Wanzer. “One of the reasons I love and support Sit. Stay. Art! is that you don’t have to adopt a pet to help – you can buy a painting of a pet instead!”

A Bagel and Black-Dog Syndrome

• Black dogs don’t always photograph well. Individuals shopping online for a shelter pet skim through dozens – sometimes hundreds – of photos of potential adoptees, and a solid black dog’s uniqueness is generally less obvious than that of its lighter or multi-colored counterparts.

• Whether shopping for clothes or looking for a pet, the human eye is drawn to lighter colors.

• Poor lighting in many shelters makes it easy to overlook darker-colored dogs.

• Typecasting: in films and on television, “mean” dogs are most often black dogs. Cats aren’t immune to the problem either. If a witch has a cat, you can be certain it’s a black one.

• Temperament doesn’t depend on coloration, and no animal chooses the color of its coat. This year’s Sit. Stay. Art! aims to spread the word that black dogs are just as adoptable and loveable as any other.

When adopting, the most important thing to remember (regardless of your color or breed preference) is that you choose a pet that tugs at your heartstrings. Any pet you save is one less pet who lives in a shelter, one less pet who has a 70 percent chance of being euthanized, and one more opportunity for another pet to be rescued and take its place to await adoption.

Amanda’s portrait of Bagel will be on display and available for sale at the show, along with pieces from over 50 local artists – it’s a non-juried show, so all thoughtful, pet-promoting creations that were submitted are included.

Visit the Sit. Stay. Art! website at www.sitstayart.org to learn more about the event and how you can participate… and provided she hasn’t been adopted by then, Bagel will be happy to be there (and out of the shelter) as well.