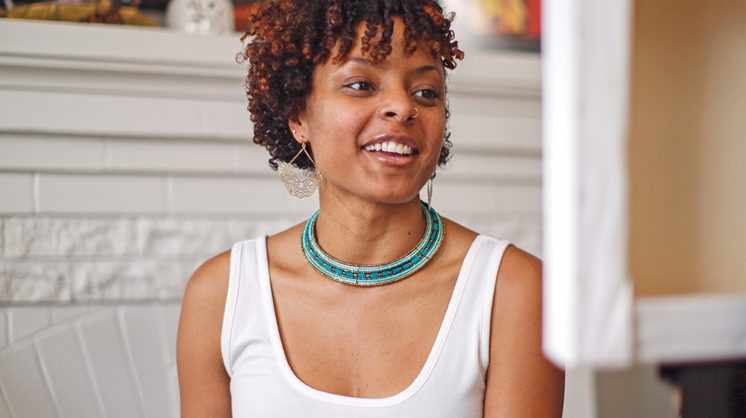 Said Osman died in 1980, and the circumstances surrounding his death are still a mystery. Osman was a Somali national who was attending college in Oklahoma, and his wife at the time was three months pregnant with their daughter Ebony. For more than half her life, Ebony Iman Dallas would believe her father died by suicide, and she would be estranged from her father’s family because of a Somali civil war and a name change.

“My mother remarried when I was two years old,” Dallas says. “My Somali family was trying to find me, but they had the wrong last name.”

For 24 years, Dallas had only one photograph of her father, taken the week before he died. The face in the photograph would ultimately end up on canvas, and in some of her paintings, Dallas would transpose her face with her father’s. The story of her search for her father, including the means of his death, is one focus of her upcoming memoir, but it has been her acrylics that have drawn all the attention so far.

Dallas went to UCO (BFA) and the California College of Arts (MFA) in Oakland, but she was a committed artist by the time she was 11.

“That’s the age I remember tucking myself away into a room to work on a piece,” she says. “It was oils back then. All my teachers pushed me toward oils, and I would work on a piece until I thought it was complete. No one could see it until I was done.”

After her UCO degree, Dallas worked in advertising in California, but she said advertising never “fed my soul.”

“If you’re going to make a career in advertising, you can’t care about what you sell,” she says. In other words, you will have to sell things you don’t like or don’t believe in, perhaps more frequently than you will sell products you love.

The company CEO was an art patron, though, so employee art hung throughout the office. One co-worker encouraged Dallas to return to creating art, not ad materials. “He just said, ‘Throw some paint on a canvas!’ and he was right,” she remembers. “I decided I wasn’t going to give up this part of me.”

Grad school followed, and it was there that she switched to acrylics. Oils take a long time to dry, even 24 hours or more, depending on thickness of the stroke and environmental factors. Acrylics are far more convenient when building layers, and so Dallas – who uses big blocks of color and layers of paint – adapted to them. 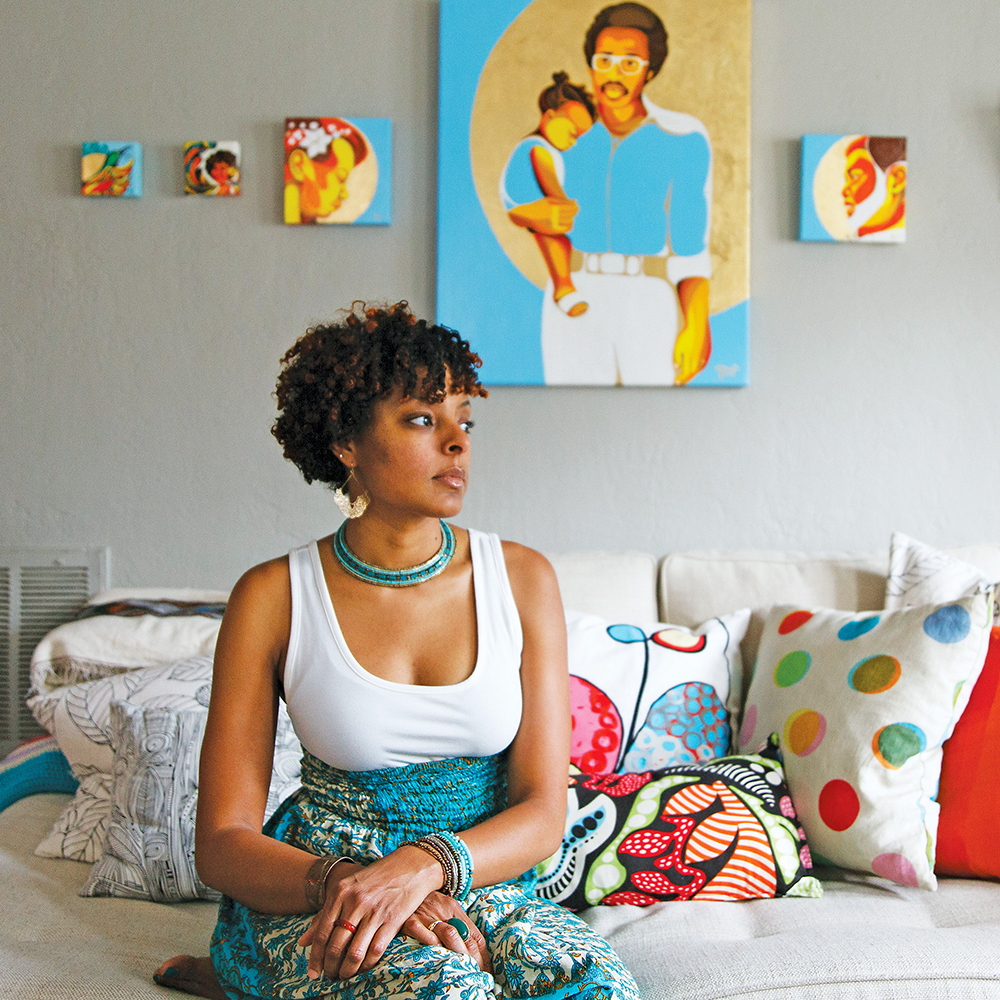 In 2004, Dallas had a chance meeting in a club with a Somali man who knew her family. She began traveling to Africa regularly, and she got to know her father’s family. It was during those years that she learned her father had not killed himself.

“I felt so guilty,” she says. “I’d been so angry with him for so many years, but when I learned that he had not done that, I was able to hear my family’s stories about him.”

Her uncle is a storyteller of the sort that only emerges in oral cultures, which is to say that the heart of the story matters, but embellishment, humor and drama are all part of the narrative. The Somali language was not standardized until 1972, so many parts of the country – where both some form of Somali and Arabic were spoken – maintained an oral tradition until late in the 20th century. Dallas learned her father’s story via her uncle’s tales, including a poem her father had written when he was a child. Slowly, a picture of the man emerged, and since everyone on the Somali side talked often of her facial resemblance to her father, her facial features would occasionally fill out a painting of her father.

Her latest series includes a few pieces with a gold leaf halo, much like a Byzantine icon. The effect is arresting because Dallas is telling a story visually, and the characters in her story are mother, father, adoptive father and grandmother. The halos create a “secular saint” sort of feel, so what emerges is an iconography of healing and inspiration.

“What inspires me to paint is telling stories and promoting healing,” she says. “I’m realizing that more and more.”

Indeed, the subjects do not seem the creations of a young woman who had worked through trauma; rather, they depict the expressions and poses of the family who nurtured her. With their bright colors and clear emotional resonance, the images are hopeful without being whimsical or cartoonish. They are like introductory illustrations to a prayer book, one centered on home and family, and even a little mythology.

One small piece depicts an Indian bird. Her father went to university in India for a while, and it was there that his father warned him not to go to America. Dallas calls the warning prophetic; it would certainly prove to be.

“My grandfather told him that black men like my father – headstrong, stubborn – don’t do well in America,” she says, “and when my uncle told me that story, I just saw my father as a bird, wanting to be free.”