The Art of Photoshop - 405 Magazine 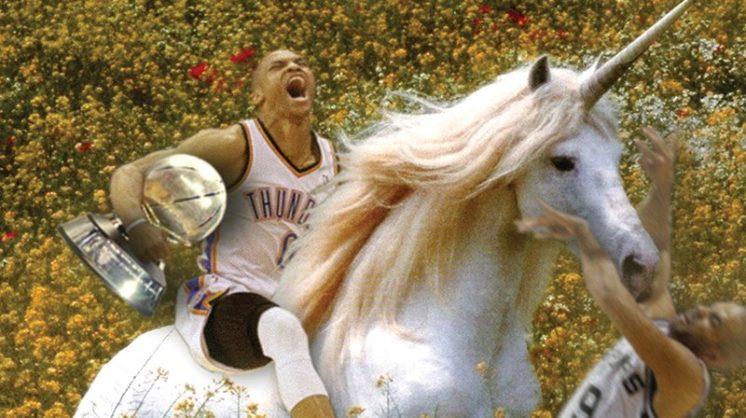 If you live in Oklahoma City, cheer for the Thunder (or Sooners, for that matter) and have ever been on social media, then you are almost certainly familiar with the work of William Bennett Berry. By way of Thunder blog Welcome to Loud City, the local artist’s humorous Photoshop memes ferociously circulate the social network scene before nearly every significant Oklahoma sporting event.

On Facebook, you might see Russell Westbrook riding on the back of a unicorn through a field of flowers, his steed trampling an opponent into the ground. Or a tiny Russ riding on the back of an eagle against the backdrop of an American flag – an image that Westbrook himself posted on his Facebook page on the Fourth of July in 2015, gathering hundreds of thousands of enthusiastic shares and likes. For more than a year, Steven Adams used one of Berry’s memes for his Twitter profile picture, his mustachioed face superimposed over the face of Tom Selleck as Magnum, P.I.

“The first one that I can remember was James Harden riding Falcor [from The NeverEnding Story] over downtown OKC,” recalls Berry. “I posted it on Facebook prior to a playoff game in ’12 and after a day or two, people were telling me that they were seeing it appear on social media. The Thunder won the game and, being superstitious when sports are involved, I decided to do another one.”

Not long after that came the first of Berry’s “Westbrook Riding a Unicorn” series. In it, a howling Westbrook and his mystical mount stampede over the Spurs’ Tony Parker – and this equal-parts-ridiculous-and-hilarious image launched Berry’s memes into the national spotlight. “I got a text from a friend telling me that it was all over Twitter,” he remembers. “Not just people with the generic egg for their profile picture, but national NBA writers and websites.”

From there, Berry got in contact with SB Nation’s Thunder website/blog Welcome To Loud City and started making the memes regularly for important games. Four years later, the “Westbrook on a Unicorn” series (along with numerous others) continues to thrive, landing his work on outlets including ESPN, CBS Sports and the NBA’s home page.

And while the Thunder memes have garnered Berry a spotlight as a creative force in Oklahoma, he has also been one of the state’s premier painters for almost two decades. His work, which shows at the Howell Gallery in Nichols Hills, is as varied as it is striking. Berry attended Denison University and the Pont-Aven School of Contemporary Art in Brittany, France, and received his Masters in Fine Arts from the University of Oklahoma in 2005. 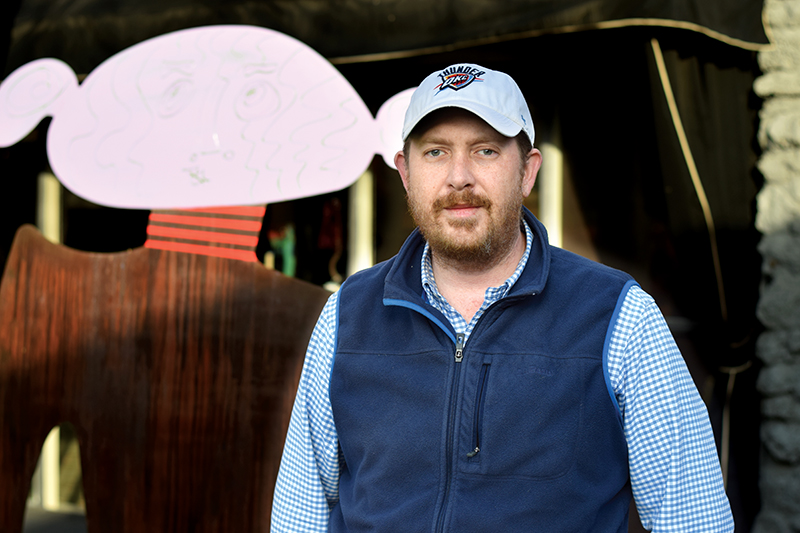 Over the years, Berry’s style has evolved considerably. “At first, I enjoyed, and still enjoy, Impressionist/Post-Impressionist style landscapes,” he says. “After grad school, I gradually became tighter and more focused on a quasi-realism in the visual sense. Cityscapes caught my interest and I focused on that, in addition to the large-scale figurative pieces.”

At the Howell Gallery, there are loose French and Italian landscapes, New York cityscapes, pet portraits and a pair of pieces with downtown Oklahoma City as the focal point.

“I’m not sure if I have one style. It’s evolved over the past 15-16 years, and I like to jump back and forth between aesthetics. Currently I’m trying to get back to the loose, Fauvist or Post-Impressionistic aesthetic, but it’s hard to shake off the urge to grab a tiny brush and get overly detailed and realistic.”

When asked whether his memes influence his painting style or vice versa, he replied, “I’d like to give some long, articulate response driven by aesthetics and color theory, but the Photoshops are their own thing. I try to pay attention to composition like I would with a painting, but that’s about it.”

After all, sports aren’t everything … but we’ll always have Adams, P.I.