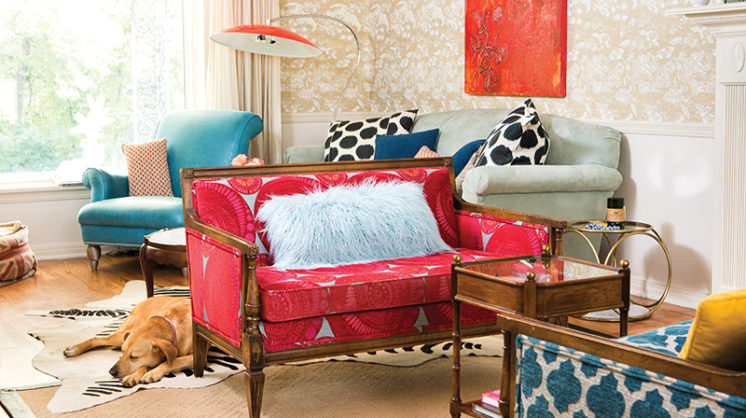 Generally speaking, people fall into one of two camps – new-house people or old-house people – and we all know which one we’re in. What one person might call a nightmare, things like imprecise door frames or slightly sloping floors, another considers an addition to the home’s charm or character. It takes a lot to love an old house, but it can become a personality, like a member of the family.

The Barnetts are old-house people. Kris and Candler Barnett, along with children Bennett and Daly, have called several of Oklahoma City’s historic neighborhoods home, including Linwood, Lincoln Terrace, Crown Heights and now Edgemere Heights. Before that, the Barnetts lived in Norman in, you guessed it, an old house.

“We met at OU, in a class called the history of religion in America,” Kris remembers. “I asked Candler to study. I thought he was so cute, and smart and funny. He has a hilarious sense of humor.” Before too long the pair married, and now, 27 years later, they chatter back and forth sharing memories, and smile at one another with genuine camaraderie and love.

Daughter Daly and son Bennett attend Mount Saint Mary Catholic High School, she a freshman and he a junior. The family has two spectacularly friendly dogs, Goldendoodle Willie and shepherd mix Frisbee, along with somewhat aloof cat Kit Bob. Kris adopted the latter after finding her meowing in the rain in a parking lot outside a Thunder game.

The pair of boldly upholstered settees came with the house. “They were covered with an old toile, and just needed some updating,” Kris says. Two seating areas add visual interest and coziness to the long rectangular room, and a faux-zebra rug makes a perfect napping spot for Willie.

The home itself is nearly miraculous, in that before the Barnetts moved in, it was built on an oversized lot and had had only one owner. “It belonged to the Wilson family, and was built in 1950,” she says. “It was ahead of its time, because out back – in what we call the lower 40 – an outdoor kitchen with a grill, a sink and counter space was built and is original to the house.”

“When we bought the house, the carpet on the stairs was the old horse-hair stuff, which had been there probably since the house was built,” she continues.

The Barnett school of interior design’s presiding philosophy is that it takes a village. “It’s kind of like raising a child. You need help from lots of people. My dear friend Troy Wilson said I should paint the wall by the stairs blue. Another friend and designer, Shannon Purnell, told me we needed the yellow pillows on the blue settee. My mother-in-law is wonderful at hanging art and placing furniture. The blue leather chair used to be red – making it more whimsical was Can’s idea. And it keeps evolving, and I love every piece.” 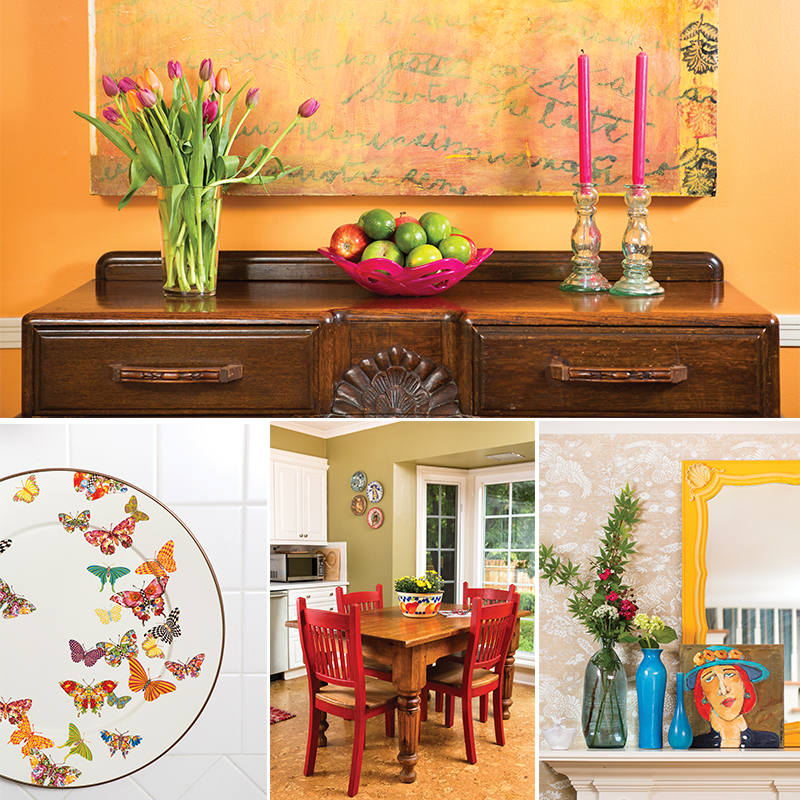 •Above an antique sideboard in the family dining room hangs a painting by Troy Wilson, commissioned by Kris for her husband’s 30th birthday. Titled “Two,” its details include cleverly executed peas in a pod, meaningful words and personally significant symbology.

• The neutral wallpaper is original to the home and makes the perfect backdrop for the barely-contained cacophony of color in the living room. Flowers from the yard and mismatched vases de-formalize the space.

• The floor in the kitchen is durable cork. It’s eco-conscious, easy to clean and maintains its natural good looks in spite of its heavy canine traffic.

• In the kitchen, the tile work and cabinetry are original. “We commissioned the large piece that houses the television and cookbooks, with a large drawer for linens,” Kris says. “The butterfly patterned platter has a secret: It hides an ugly tile swan behind it.” 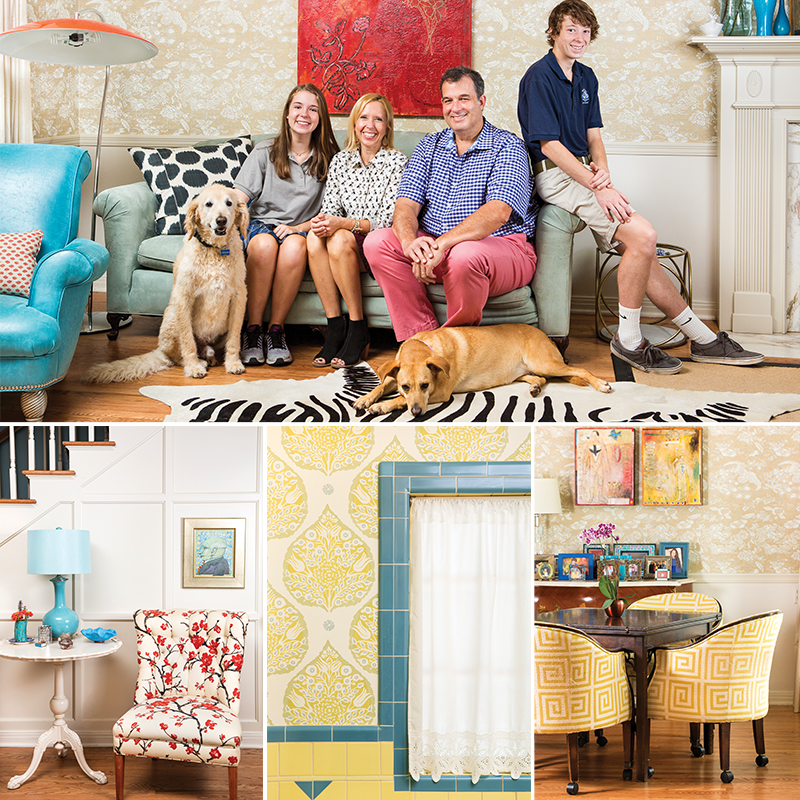 • “People always comment on the color in our house,” Kris says, “but the walls and floors are very neutral. In our old house, the walls of the living room were bright red, and nobody mentioned that!” Here, a game table snuggles up with four club chairs, covered in a yellow-gold Greek key patterned fabric.

• “We painted the powder bath the wrong color when we moved in,” Kris laughs. “I finally found the right wallpaper, and our paper hanger was here until late last night getting it installed.” Old, colorful, vintage tiles can be a trick to match, but this paper, “Lotus” by Galbraith & Paul, is perfect.

• The Barnett home is a deft mix of pattern and color. Painted furniture can be found in every room, and original art, much of it by family friend and artist/designer Troy Wilson, enlivens the home’s walls. Clever details and bric-a-brac top most surfaces, giving the eye dozens of playful places to land.