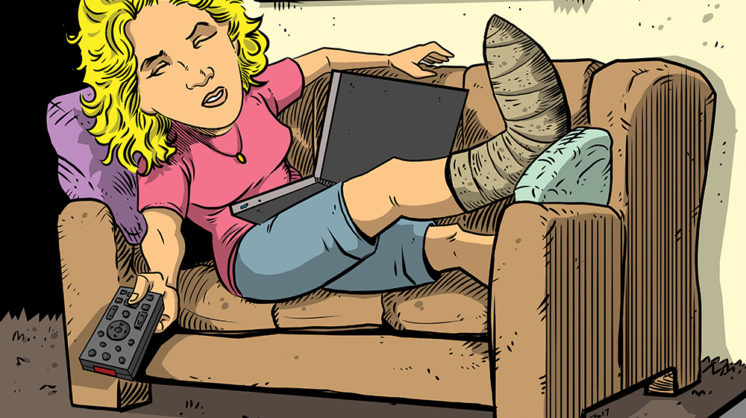 I’m three weeks into my recovery from a foot surgery that I’d been putting off for years. Hastened into action by a deadline my insurance company set during its annoying annual belt tightening, I finally consented to putting life as I know it on hold for several weeks while I convalesced on the couch.

For as long as I’d procrastinated about having foot surgery, I’d also kept a running mental list of all the things I’d do if I had three weeks of just lying around with ice on my foot and time on my hands.

The plan … My first project would be a glorious, yet ruthless, culling and organizing of my work and personal email accounts. I’d time-travel through my inbox – sorting, grouping and deleting emails – beginning with 2010. As part of the deep purge, I’d unsubscribe from about 147 e-commerce intrusions, before revisiting all the messages with follow-up flags and sending thoughtful updates.

… went like this: Days one and two were a blur, thanks to the mind-altering miracle of modern pain management. By day three, my inbox had amassed about 125 new messages, but in my delirium, I’d only managed to peck out one message to a co-worker: “Not d ead.Te ll othe rss.”

By the end of the first week, I’d rallied enough to scroll down to 2010. Instead of grouping and deleting emails en masse, however, I opened about 1,500 inconsequential messages and entered into a little time warp, intensified by pain meds. Seeing names of associates from years gone by prompted hours of Facebook and LinkedIn stalking, followed by a solid two-hour YouTube mini-binge of clips from “Britain’s Got Talent,” promoted on the “you might like” column on the right-hand side of my screen.

Bottom line: no emails were deleted.

The plan … To ease my convalescence, I’d opted in for the commercial-free Hulu subscription and prepared my Netflix queue. I would settle in for the entire fifth season of “House of Cards,” and afterward, expand my knowledge of the Roman Empire, Quantum Physics, Mastering Tai Chi and a dozen more courses from The Great Courses on Apple TV. During my recovery, I’d definitely offset the time on the couch by doing some leg lifts and firming up the back nine.

… went like this: Season five of “House of Cards” droned in the background during several days of binge catnapping. I would fail a pop quiz that required a synopsis of the season.

During a scan of Hulu offerings, I came across the intro to an episode of “Hoarders.” One clip featured extreme cleanup specialist Matt Paxton, who was overheard telling psychologist Dr. Robin Zazio that the episode’s hoard was the worst he’d ever seen in the history of doing the show. That’s all I needed to hear.

Bottom line: There were no leg lifts. The Great Courses never happened. There were many episodes of “Hoarders” (commercial-free!), which resulted in my own piles of Popsicle sticks and Funyuns crumbs.

The plan … I’d planned to read five or six books during my down time – when will I ever have this kind of time again? My reading usually takes place from the comfort of a chair that overlooks the bird feeders in the backyard. I’d been looking forward to finishing a splashy tell-all about J. Edgar Hoover’s cross-dressing kink during his reign of terror. Next, I’d enjoy an uninterrupted read about productivity and efficient work habits. After that, I’d be poring over books about foreign travel, true crime or backyard makeovers.

… went like this: On a couple of occasions, I read the back of a cereal box, only to look up and find a squirrel on the bird feeder. From there, my reading consisted of online articles about how to build a backyard sniper’s nest, how to zero the scope of an air rifle and how to dispose of dead vermin.

Bottom line: No time for books. Hard to tip-toe to the backyard in a walking boot.