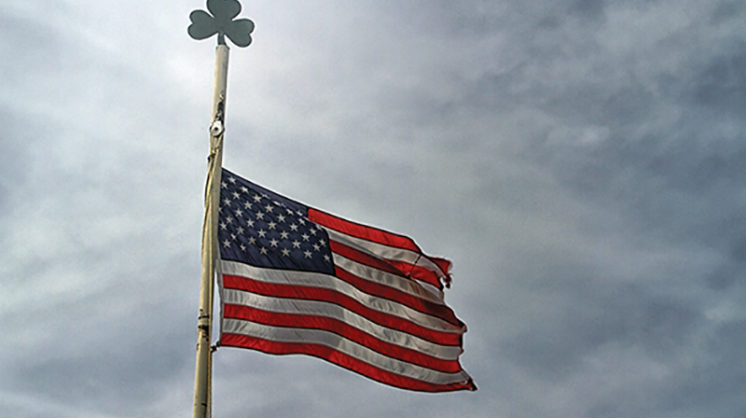 The Oil-Boom Fortunes Of Shamrock, Oklahoma, Rose So Far So Fast It Seemed The Leprechauns Themselves Had Smiled Upon The Creek County Town, Criss-Crossed By Roads With Names Like Dublin, Killarney And Cork.

With men and cash flowing in from the nearby Cushing oil field, the town’s first lot was sold in November 1915. The Encyclopedia of Oklahoma History & Culture notes dryly of Shamrock and its neighbors, which included Drumright, Alright, Downright, Damright and Justright: “As in all oil booms, several towns developed to service the activity, and they encountered the usual problems of overcrowding, lawlessness and general chaos.”

But in the early days, Shamrock set itself apart by adopting an Irish air.

No matter that the town was actually named for Shamrock, Illinois, hometown of its first postmaster. It was to Ireland the town looked with civic pride. The new buildings that sprouted along Tipperary Road were painted green, and roofed with green tile.

Awash in oil and optimism, 90 days after its founding, the men of Shamrock conspired to throw the biggest St. Patrick’s Day bash the state had ever witnessed.

Exactly 99 years ago, the Wolftones of Shamrock – a fraternity named for 18th century Irish nationalist Theobald Wolf Tone, who slit his own neck rather than be executed by the British as a traitor – was formed to spearhead the arrangements.

The Wolftones rounded up all matter of green bunting and flags, sported green neckties for days before the celebration and, in the spirit of St. Patrick himself, rustled up snakes to scatter along Tipperary Road so they could be ceremoniously driven out. The newly established newspaper, The Shamrock Brogue, noted serpents of various colors and sizes and the “sudden sight of them frequently [were] sending trembles up the spinal columns of the passersby."

The most important task, however, was the acquisition of a Blarney Stone. It was to be a tribute to the ancient Irish rock in Blarney Castle, said to bestow the gift of eloquence to any lips that kiss it.

Five thousand revelers swarmed the dusty streets for Shamrock’s first St. Patrick’s Day parade. The Shamrock Brogue of March 25, 1916, reported: “The bringing in of the blarney stone was the feature of the day. This is a mammoth pink-colored sand rock that weighs 11,500 pounds. It was quarried from the bluff that overhangs Spring Creek at a point about five miles south of town… Six teams of the finest of the oil field horses pulled the stone up Tipperary Road. The teams were gaily caparisoned, as a prize of many rings, loops and plumes had been offered for the best-appearing team… The great, uncarved stone was just as nature had made it and it was not sullied with decorations of any kind. On top of it sat P.J. Sullivan, secretary of the Wolftones, holding aloft a ten-foot Stars and Stripes unfurled to the breeze.”

The Blarney Stone was installed as guest of honor beneath a tent at the corner of Tipperary and Dublin. The Wolftones charged 25 cents for each kiss of the stone and those who opted out were ordered to tip their hats as they passed.

For a thousand days the riches flowed. The population of the town and tents pitched nearby swelled to 25,000. The town voted to invest in bonds to build up city hall and improve Shamrock’s water system. Soon, the pink rock of the Blarney Stone was ground into gravel and stirred into the new concrete sidewalks, so every step in town would be lucky.

But the good times faded nearly as quickly as they came. Production slowed and oil-field workers moved on. By 1920, the town had 1,409 people; by 1930, the population was 777. When Pretty Boy Floyd and George Birdwell robbed the Citizens Bank of Shamrock on August 4, 1931, their total take was only $400. It was the smallest bank haul of their career.

The second Blarney Stone came to town, with considerably less fanfare, in 1958. Longtime Mayor Eric Ferren and town booster Harry McKnight painted the stone green. A three-foot tall likeness of a shamrock was placed atop the rock to announce a new era: the town was retiring its $40,000 bond from 1917, a debt that over the decades had ballooned to $120,000. The new rock was christened with water brought from Ireland to solemnize the occasion.

The slab still sits in two pieces a few feet off State Highway 16, pock-marked and painted seafoam green. Stray field grass pokes around its corners. Wild seeds have taken root in its crevices. Though there is no marker to tell its story, this month the Blarney Stone will welcome revelers for Shamrock’s 99th St. Patrick’s Day, crown jewel of the oil patch boom town where people once paid to kiss it.