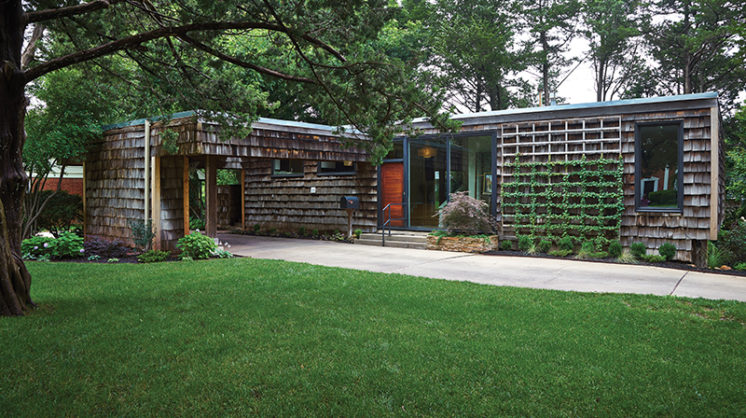 Although better known for cost overruns related to his projects, Frank Lloyd Wright did manage to create a style of home for “common people,” designed to keep costs under control. Beginning in the 1930s, Wright built several dozen “Usonian” homes: single-story, single-family homes with carports instead of garages, open living spaces that often incorporated the kitchen and a reliance on wood, brick and other natural materials.

The Bottomley’s Usonian-style home in Norman reflects the spirit of Wright’s vision for homes for the middle class across America, or in the case of this conversation, across “Usonia.”

The name (the origin of which is debated), was a proposed alternate for “America,” as some wanted to distinguish the U.S.A. from Canada and Mexico, even in the mid-19th century.

The Bottomleys bought the home in 2012, and at the time of the purchase, the house had been used as rental property for college students. Built in 1971 by Dr. Mervin Clark and his wife Lenore with plans from architectural firm Phelps, Spitz, Ammerman & Thomas, the house underwent renovations in 1990, but the Usonian style was preserved.

“The plans, which we found, were reworked several times,” Megan said. “The house was originally designed with a sloped roof, but that didn’t make the final design.”

Her father is a third-generation builder from Kansas City, and when the family was considering purchasing the house, Megan had him evaluate the property. He concluded that the home was structurally in good shape, and with his positive assessment, Megan began the process of planning the interior changes. 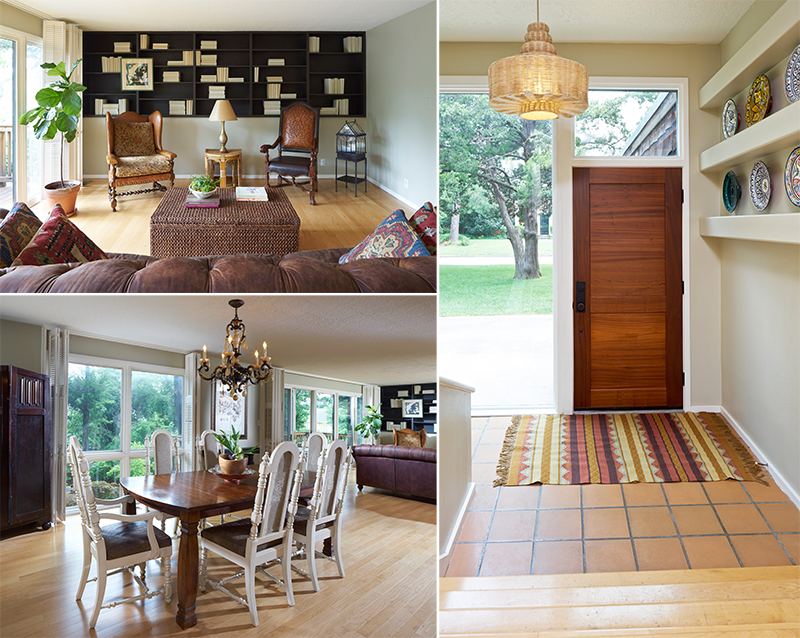 (clockwise from to left)

• The open shelves in the living room presented a challenge. Rather than opt for clutter or unnecessary show books, Megan created an interesting geometrical piece of art.

• The plates just inside the front door manage to tie together the kitchen and living space, as the kitchen was designed around Megan’s desire to see her grandmother’s dishes.

• The main dining space is consistent with the Usonian style inasmuch as it is part of the larger living space that includes the living room.

“I wanted to maintain the style but make it warmer,” she said. “When we bought it, there was a lot of white, and it looked very modern.”

Much of the interior palette was changed to brown and black, but the black was used to create depth, not as a featured color. The lighting in the common areas is amber, which contributes to the warmth. Megan selected the light fixtures herself – her experience as the daughter and granddaughter of a builder imparts a confidence atypical for homeowners attempting a redesign.

“I knew about several resources because of my family’s building background,” she said.

Her strategy with the color palette was to bring the outside inside to a degree. Wright was committed to using natural materials from a building’s surroundings to better help it blend in with its environment. Megan followed suit and used rich brown leather, raw wood grain and a smattering of plants so that the inside of the house seems to make a natural transition from the outside. The effect is made more pronounced by the floor-to-ceiling windows in the entry. 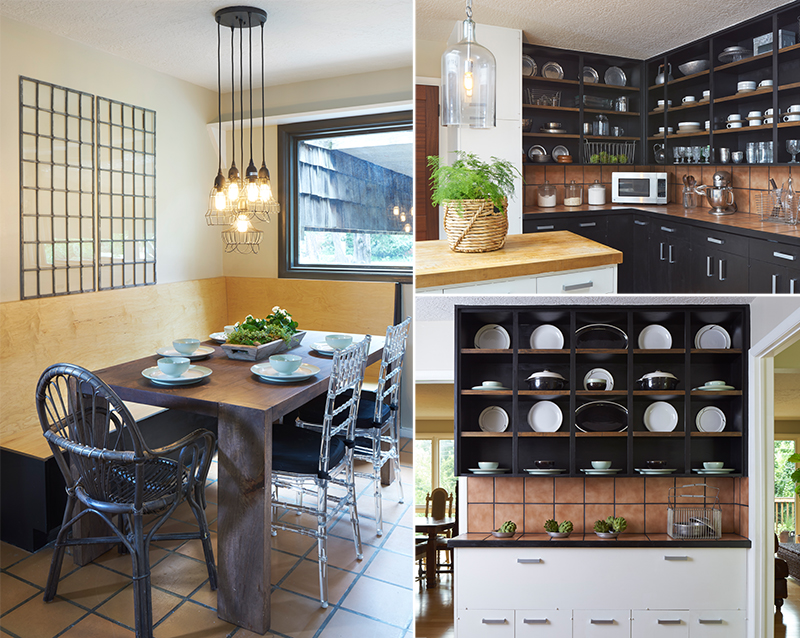 • The breakfast nook is a perfect example of the unique style in the house. The chairs are intentionally not matched, the bench looks like a midcentury modern touch – it was white when they bought the house – and the lighting is a striking blend of modern and rustic.

•  Megan painted many of the cabinets, and the use of black here adds warmth and depth to the room. The bell-shaped lighting fixture is a nice touch of sturdy and rustic.

•  The open cabinets allow for the display of family dishes handed down from a cherished ancestor.

Jeremy Miller (Miller Carpentry) built the front door, a beautiful touch that stands out more for its use of warm tones and horizontal grain. It contrasts sharply with the rough wood shingles outside, but the effect from inside is startlingly different, as it contributes to the overall comfort and warmth of the home.

The open concept cabinetry in the kitchen presented a bit of a problem, as did the large bookshelf in the living room, but Megan had a very good reason for keeping the cabinets open.

“Before she died, my grandmother left me dishes and crystal,” she said. “We were very close, so I wanted to see the things she handed down to me on display.” 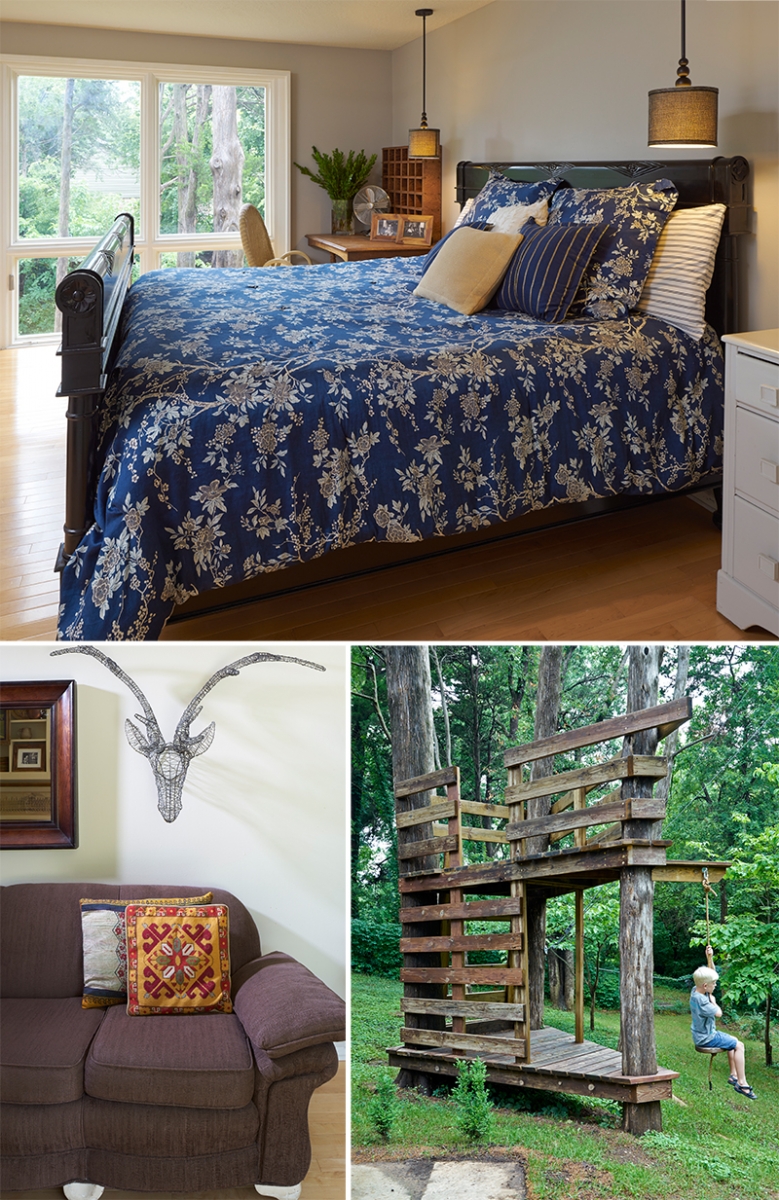 (clockwise from the top)

• In the master bedroom, the desk creates a fun juxtaposition with the darker, more serious tone of the sleigh bed. Add the white nightstand to the mix, and you have a very eclectic, personal style for the couple’s space.

• A play area for the children, built by Jeremy Miller, continues the theme by incorporating trees and natural wood into a fort/treehouse.

• A wire deer head in the office was a spontaneous purchase in Kansas City. “My husband was deployed at the time,” Megan said. “I noticed a shop was going out of business, so I went in to see what I could find.”

However, the bookshelves were another matter entirely. “We don’t have a lot of books,” Megan said, “so we had to get creative with the open shelves. I collect different things for the kids’ shelves, and Circa Marketplace in Norman calls me whenever they get something new and interesting.”

Each of the Bottomleys’ children has a theme in their bedroom, and the guest bedroom is the only area in the house where bright colors dictate the design.

The master bedroom contains two distinct areas, as the couple wanted a place to sit and read. Situated next to another large floor-to-ceiling window, the space gets plenty of natural light, and the theme of bringing the outside in is continued from the common living areas.

• “The desk was bright orange when we moved in, and I liked it, so I wanted to keep it,” Megan said. “I found bedding at Anthropologie to go with it and balance it out by combining white and bright accents.”

• The bed in her daughter’s room was Megan’s mother’s when her mother was a small girl. The antique has stayed in the family, and the bright bedding dresses up the dark wood and balances the white of the room.

• The dresser in her son’s room has been with Megan since she was 21. “I bought it when I was single,” she said. “I stripped and resealed it, and every one of the kids has had it in their room at some point.”

• The brass animals are part of the overall theme in the nursery, and the family is always on the lookout for new ones.

On the exterior of the house, corner pieces were added in 2014 to update the look. Megan added the large trellis in 2013, and she said placing the two tiny Boston ivy vines on the trellis seemed anticlimactic. Now, though, the vines are nearly two-thirds of the way up the trellis. The effect further submerges the house into a natural setting.

As with most homes, the Bottomleys’ design is a mixture of objects with personal, historical value and objects purchased for aesthetic or practical reasons. By allowing personal style to set the tone, she has managed to create a space that dresses up the stoic, modern Usonian style into a comfortable, homey space that really does blur the line between inside and outside.