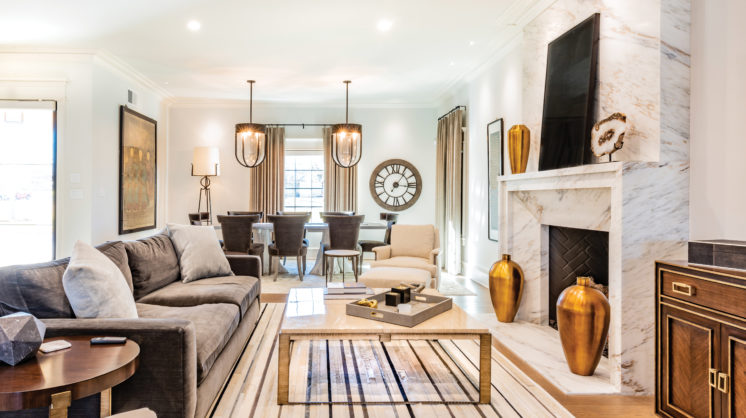 Aletha and Michael Burrage are high school sweethearts who married as teenagers 51 years ago, had successful professional careers in southeast Oklahoma and are now enjoying the view from their freshly renovated home in Nichols Hills.

Designer Jennifer Welch featured the Burrage home on the second season premiere of the revamped Bravo show “Sweet Home” (formerly “Sweet Home Oklahoma”). On it, Welch talked about the work transforming the nearly 70-year-old home into a modern-yet-traditional oasis. Gone are the frills and jewel tones from a 1980s remodel.

The house “has to feel warm and comfortable,” Welch says on “Sweet Home”; the judge’s “aesthetic is just very timeless and elegant.” 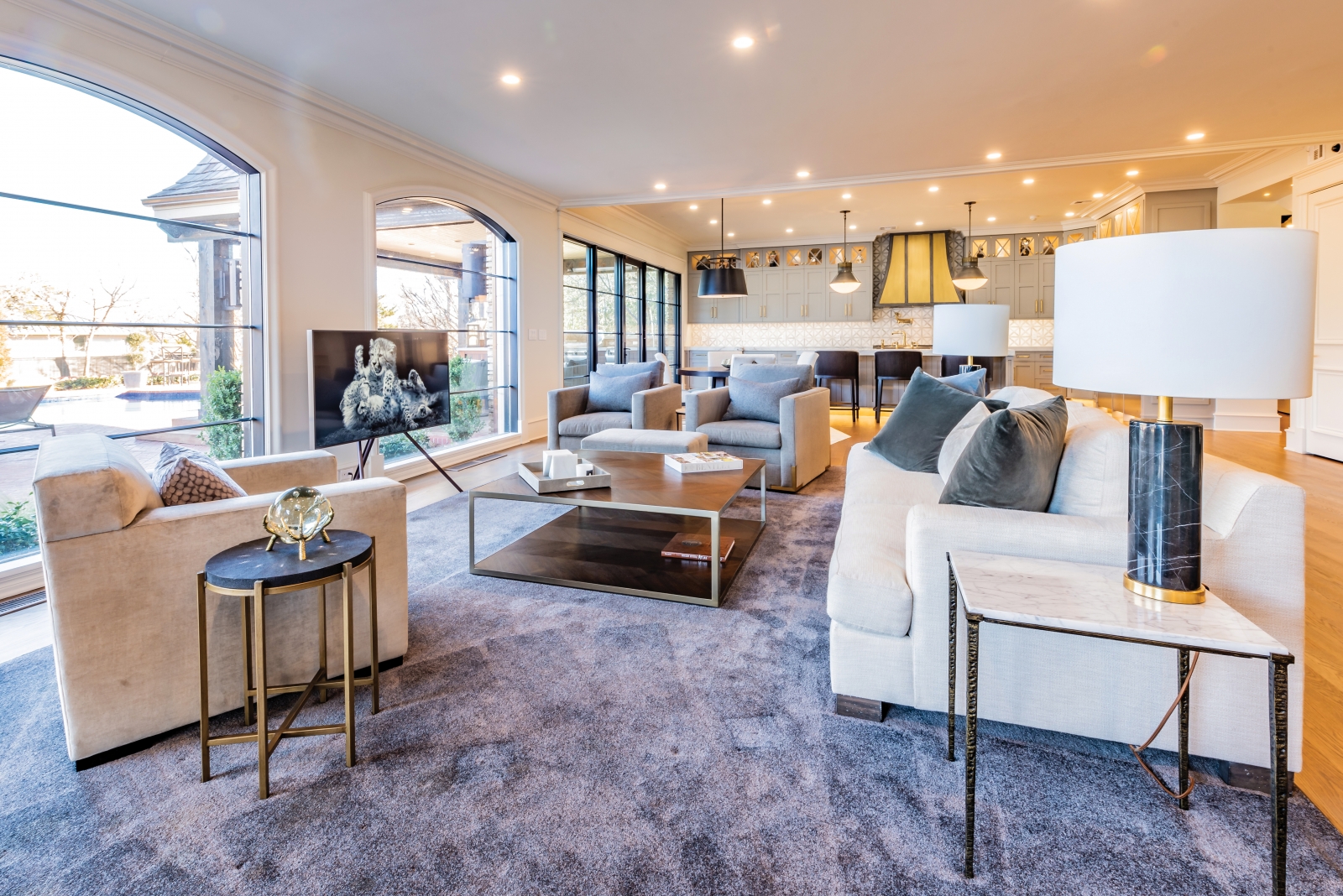 A tour of the home with the Burrages reflects these very qualities – they are as gracious and welcoming as the decor, which radiates the warmth and comfort of the hosts. Gray, tan and metallic shades provide a backdrop for the luxurious furnishings throughout.

Originally built in 1951, the stone home sits on a three-acre lot that includes a turret in front and a pond and a pool in back. The grounds first attracted the Burrages to the property; they bought the home in 2017, cleaned up the pond areas and renovated the upstairs before they moved in. The upstairs office had once been a servants’ quarters, but the Burrages turned that area back into a living space, complete with a kitchen, which their sons and families can enjoy when they visit from Durant. The Burrages lived and cooked in that space while the downstairs went through more extensive remodeling, with construction done by Jim Stevenson. 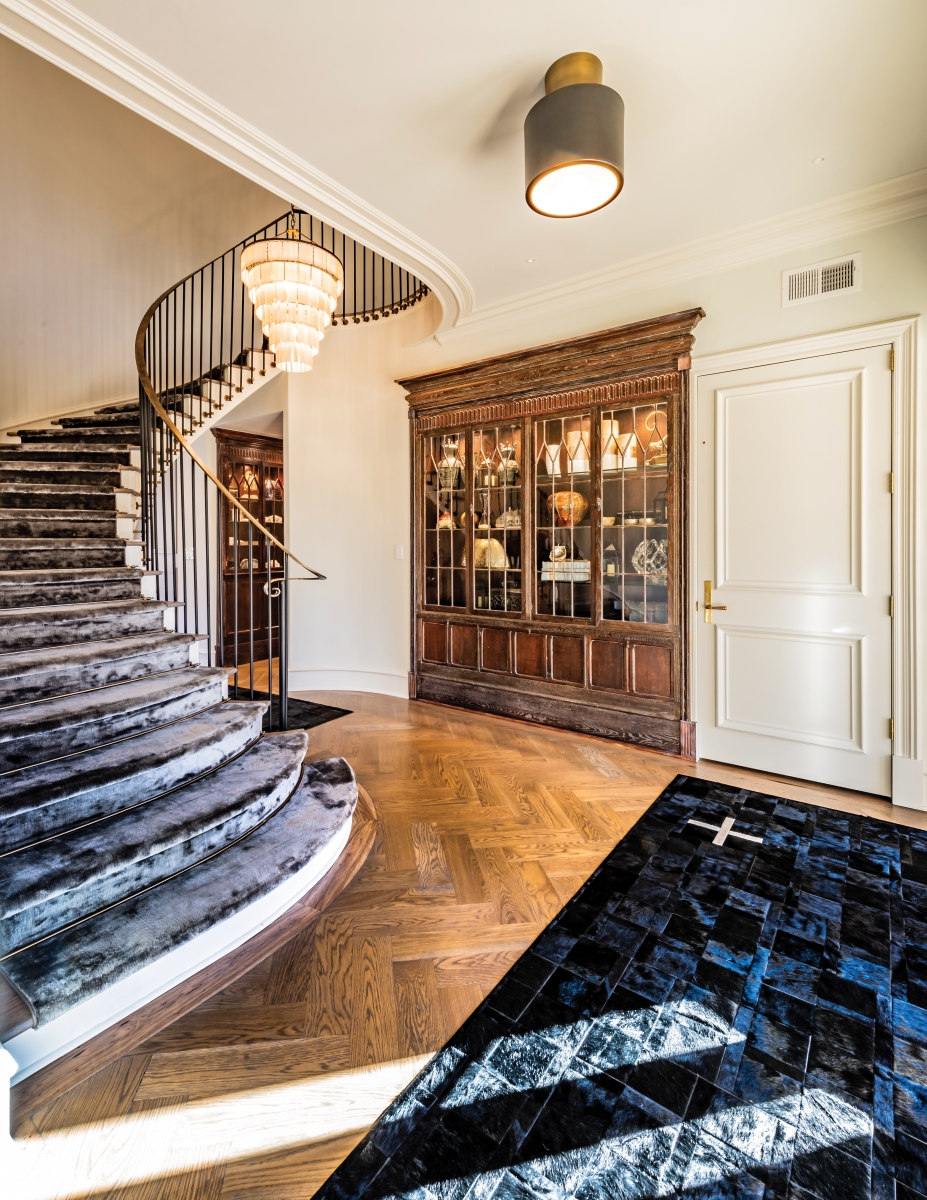 What once was the formal dining room is now a signature kitchen with a large island topped with Danby marble – perfect for family gatherings. The home’s original kitchen in back is now the master closet. Welch moved the master bedroom downstairs; aside from the closet-kitchen, the rest of that space used to be an office. She also removed walls between living areas to open up the space. The Burrages kept the intricately detailed, swan-shaped brass faucets in the downstairs guest bathroom and the arched windows overlooking the pool and the pond, but they and Welch scrutinized every other part of the house from the art and furnishings to the original built-in china cabinets, which they moved from a hallway to a foyer.

Upstairs, the living quarters connect to a large family room with a leather sectional large enough to hold family gatherings. On the coffee table is a wooden bowl with turquoise inlays crafted by the late Derald “Van” Beauford from Seminole. That room opens up to a deck covered in limestone tile, and features comfortable seating and a dining area overlooking the backyard pond and fountains. The Burrages also painted, changed out flooring and updated the bathrooms on the second floor, removing dated fixtures such as a pink tub and floral drapes matching the wallpaper.

The Burrages’ art throughout the home is inspired by their interests, heritages and aesthetic likes. All of the colorful Native art is by Jamie Semple Umsted of Durant, who – like Michael – is of Choctaw heritage. Several bronze sea life sculptures placed throughout the home include sea turtles by artists D. Scott and J. Townsend, and dolphins by L. Ward and Townsend.

“If he likes it, we get it, and he’s got great taste,” Aletha Burrage says. 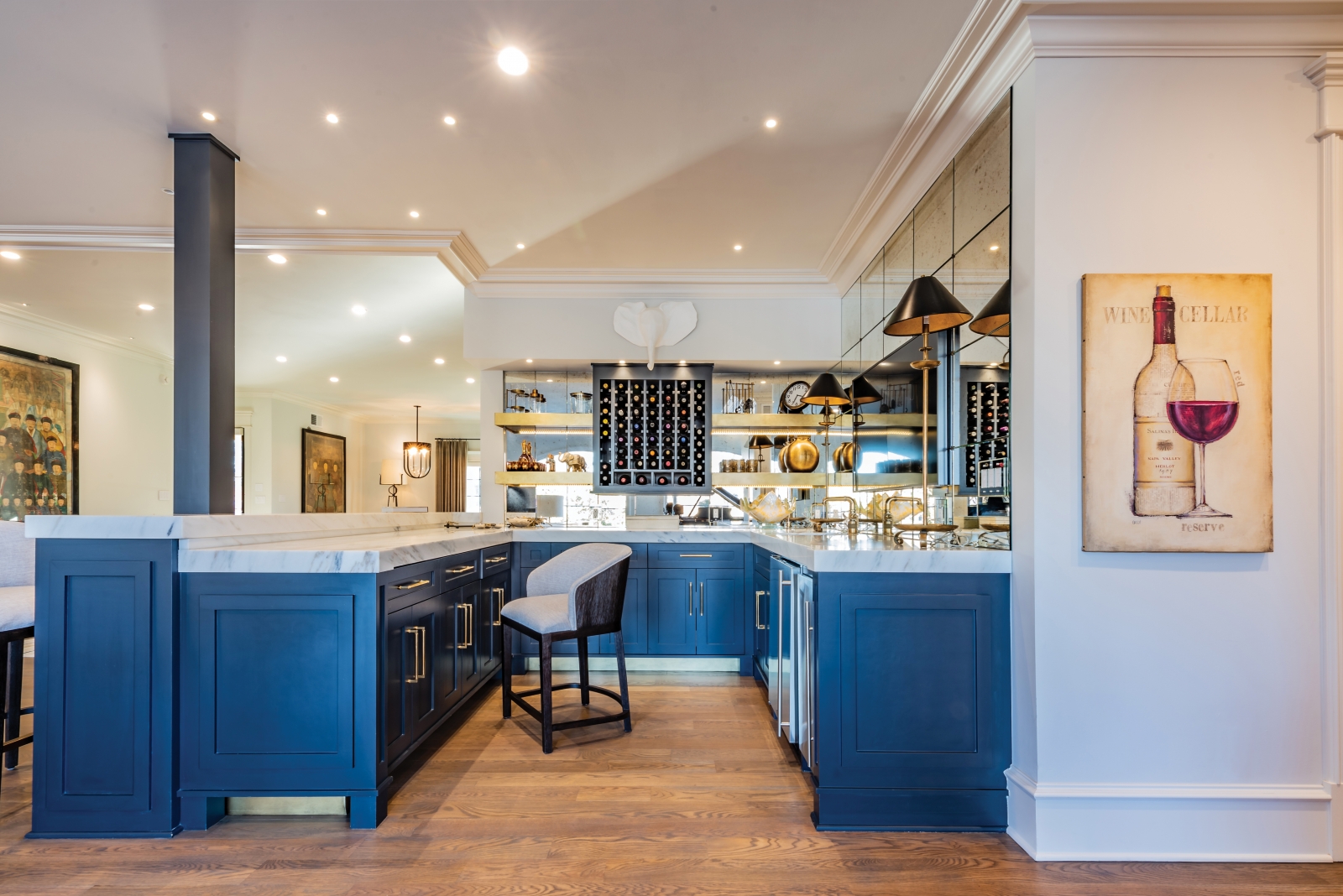 Michael Burrage has spent his career as an attorney. Initially in private practice in Antlers, he was appointed by President Clinton in 1991 as the first Native American federal judge. He served as U.S. District Judge for the Eastern, Northern and Western districts of Oklahoma from 1996 to 2001, and has been with Whitten Burrage since 2007. Aletha Burrage retired in 2013 as the principal of Antlers Elementary School after 38 years in education. They have two sons and daughters-in-law who live in Durant – Sean is president of Southeastern Oklahoma State University, and David has a private law practice. They also have three grandsons and a granddaughter, ranging in age from 9 to 22.

After 51 years of marriage, the Burrages are enjoying every bit of their house – along with their dogs, a Shih-Tzu named Bentley and a Yorkie named Cocoa – and find themselves enjoying time together in each area, upstairs and downstairs, inside and outdoors.

“We are very appreciative of what we have now,” Aletha Burrage says.