The Case of the World’s Largest Peanut - 405 Magazine 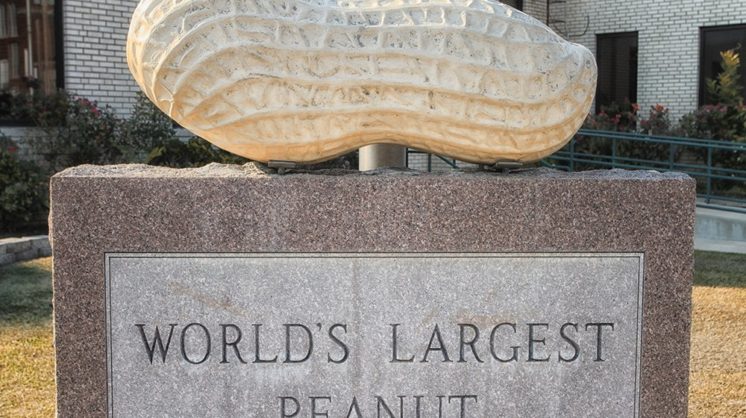 THE CLAIM: Durant, Okla., is home to the World’s Largest Peanut

OTHER CLAIM: OK, so maybe it’s not the largest now – but at the time it was built, it was.

In the hotly contested (really) category of world’s largest peanut, Durant’s cast-metal sculpture soldered to the top of a granite monument at the corner of 3rd and Evergreen has boasted its supremacy for the past 43 years.

Unveiled with fanfare on a chilly Friday, Nov. 15, 1974, it’s 3 feet long and 18 inches around, crafted of 50 pounds of aluminum and dedicated to the Bryan County Peanut Growers and Processors.
Olin Miller, a Durant businessman who chaired the Oklahoma Peanut Princess Pageant – and who, based upon his skill as a community booster, soon would be named president of the Durant Chamber of Commerce – came up with a nutty idea to promote the town.

Under the headline “Goober to Put Durant on Map,” he told The Oklahoman the week before the statue’s dedication: “Durant had been known far and wide as the city with the awful Main Street traffic.

e have our bypass in now on US 69-75 and most of the heavy truck traffic that has rubbed down Main Street for years is gone. I wanted Durant to be known for something good.”

The $2,500 cost was split five ways; Miller, the two banks in town, John Haskins at DeLeon Peanut Co. and Jack Sawyer of Goldkist each kicking in $500. To make sure not just any peanut would be memorialized, Miller took a bag of Bryan County peanuts to A.R.K. Ramos in Oklahoma City. An artist from the firm sorted through the specimens, choosing a favorite based on color and shape. He put the winner in a glass jar, examined it from all angles and sketched a precise model that then was cast.

To trumpet the new addition, signs were added three months later on highways leading into town: “DURANT: Home of the World’s Largest Peanut and a Few Other Nuts.”

In a story that made national news, The Associated Press noted City Council members had received so many complaints from unamused residents that they scheduled a public hearing on whether the signs should remain. The report dutifully noted: “Durant is in the heart of Oklahoma’s peanut country and bills itself as the peanut capital of the world.”

The signs – and even the peanut – were taken by pranksters over the years. The peanut returned. The signs did not.

Four decades after its bold declaration, the Durant goober does not rank among the top 60 largest peanuts in the nation.

PEANUTS BY THE NUMBERS

In 1977, three years after Durant’s “World’s Largest Peanut” was installed, Oklahoma harvested its best peanut crop ever: 267.6 million pounds. It was a mark never to be matched again. In 2015, Oklahoma peanut growers harvested 9,000 acres, averaging 3,500 pounds per acre at 21.3 cents per pound. Total production: 31.5 million pounds, down 28 percent from the previous year.
The United States is third among world peanut producers, after China and India. 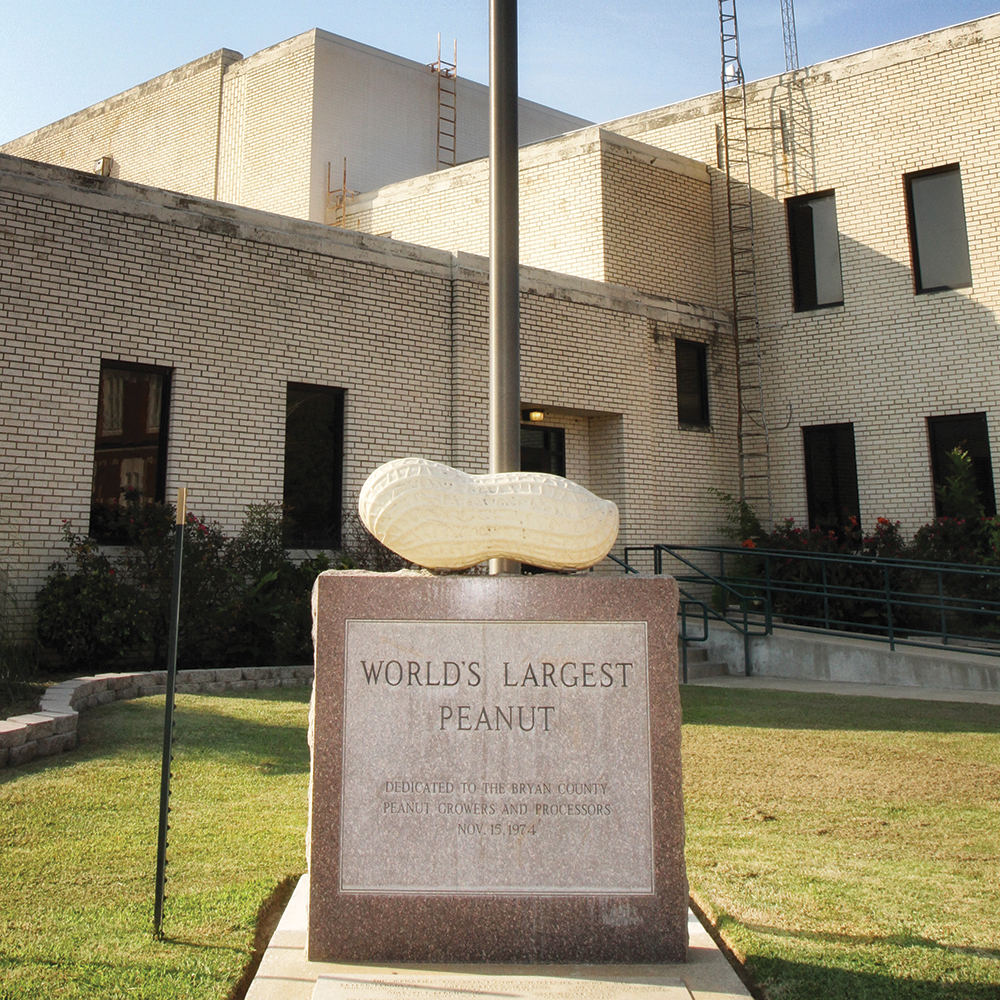 Blakely, Georgia (1954)
Population 4,702
An 8-foot stone monument declaring Early County as “the largest peanut producing center in the world” is topped by a carved peanut measuring approximately 3 feet long. The installation has held a place of honor on the lawn of the county courthouse for 63 years.

Floresville, Texas (1970)
Population 7,495
The Jaycees and Jaycee-ettes of Wilson County dedicated this 6-foot-tall vertical peanut “in loving memory of ‘The Peanut King’ Joe T. Sheehy” (1887-1967), who introduced the Spanish peanut to the region. The large snowman-shaped peanut – resembling a limbless Mr. Peanut without monocle, top hat and cane – is installed on the lawn of the county courthouse, near where the town hosts the Floresville Peanut Festival and Goober Games every October.

Pearsall, Texas (1973)
Population 10,064
The 6-foot-long horizontal peanut is held aloft by metal supports above a concrete base that notes “WORLD’S LARGEST PEANUT” and “55,000,000 LBS. MARKETED ANNUALLY.” The town, home to singer George Strait, built a new foundation for the display in 2011.

Ashburn, Georgia (1975)
Population 3,737
Standing tall in the pantheon of giant peanuts is the Official State Peanut Monument of Georgia. The 10-foot-tall peanut stands atop a 15-foot brick column, nestled in a sculpted crown featuring bicycle reflectors at its tips and painted with the declaration “Georgia 1st for Peanuts.” Ashburn is also home to The Golden Peanut Company, billed as the world’s largest peanut-shelling plant, and to a nearby peanut museum.

Plains, Georgia (1976)
Population 734
A 12-foot-tall peanut with a toothy grin greets visitors to the hometown of President Jimmy Carter. The peanut creation was built from plaster and chicken wire for a campaign parade honoring the one-time peanut farmer. It has been set up in different locations around town, surviving being hit by a car in 2000.

Pelion, South Carolina
Population 706
This cast-iron contender, of indeterminate age, stands approximately 6 feet high and is mounted on a 4-foot-tall metal post, giving it the look of a giant corn dog. Pelion is home to the annual South Carolina Peanut Party, which celebrated its 36th year in August. The peanut-on-a-pole marks the way to Pelion’s festival, which opens with a Blessing of the Pots and includes a parade, a celebration of boiled peanuts and a PB&J sandwich-eating contest (current record: 8.5 sandwiches in 3 minutes).

Dothan, Alabama (1993)
Population 68,468
The self-proclaimed Peanut Capital of the World, Dothan is home to the 4-foot-tall Golden Peanut, as well as the two-week National Peanut Festival. The November celebration began in 1938, featuring a nearly octogenarian George Washington Carver as its first guest of honor. It is said that half of the peanuts in the United States are grown within 100 miles of Dothan.

In the 21st century, the city installed more than 60 fiberglass “art peanuts” around town, each a replica of the city’s famous golden peanut – and each larger than the Durant monument.

In addition, a Winnebago-sized peanut emblazoned with “USA,” commissioned in 2006 by the National Peanut Board and hauled around the nation by trailer for the Great American Peanut Tour, was at last report using Dothan as a home base.