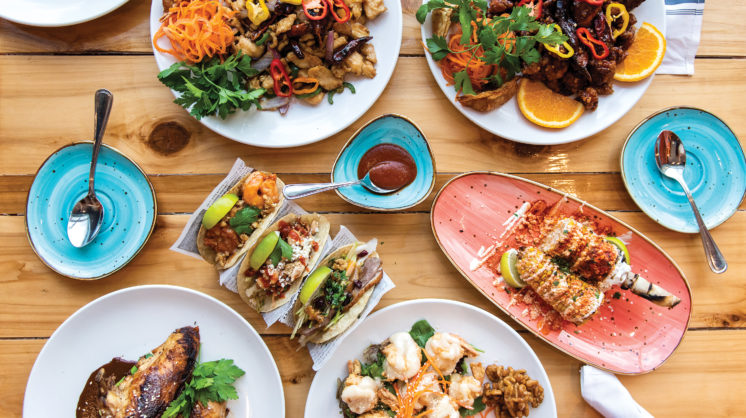 As we three representatives of 405 stood in Chigama, watching and talking among ourselves while dish after dish was brought out to be photographed and sampled, two words kept coming up over and over in our murmured conversation: “colorful” and “savory.” Also “ooh” and “wow,” but those were practically involuntary interjections – the food coming out of this fusion concept’s kitchen is seriously impressive.

The dining area is a nice little space, too, decorated mainly in orange with contrasting pops of teal. It’s filled with shiny and sparkly accents, but isn’t so sleek that it stops being comfortable, especially in the banquettes and wing chairs along the south wall.

Chigama is a collaboration between OKC traditions, as well as a blend of Latin and Asian cultural flavors: It’s the result of a partnership between chef Jeffrey Khowong, who was a driving force behind Sushi Neko and Musashi’s for years, and the Ha family, whose former restaurant Dot Wo Garden is still frequently mourned around our office. 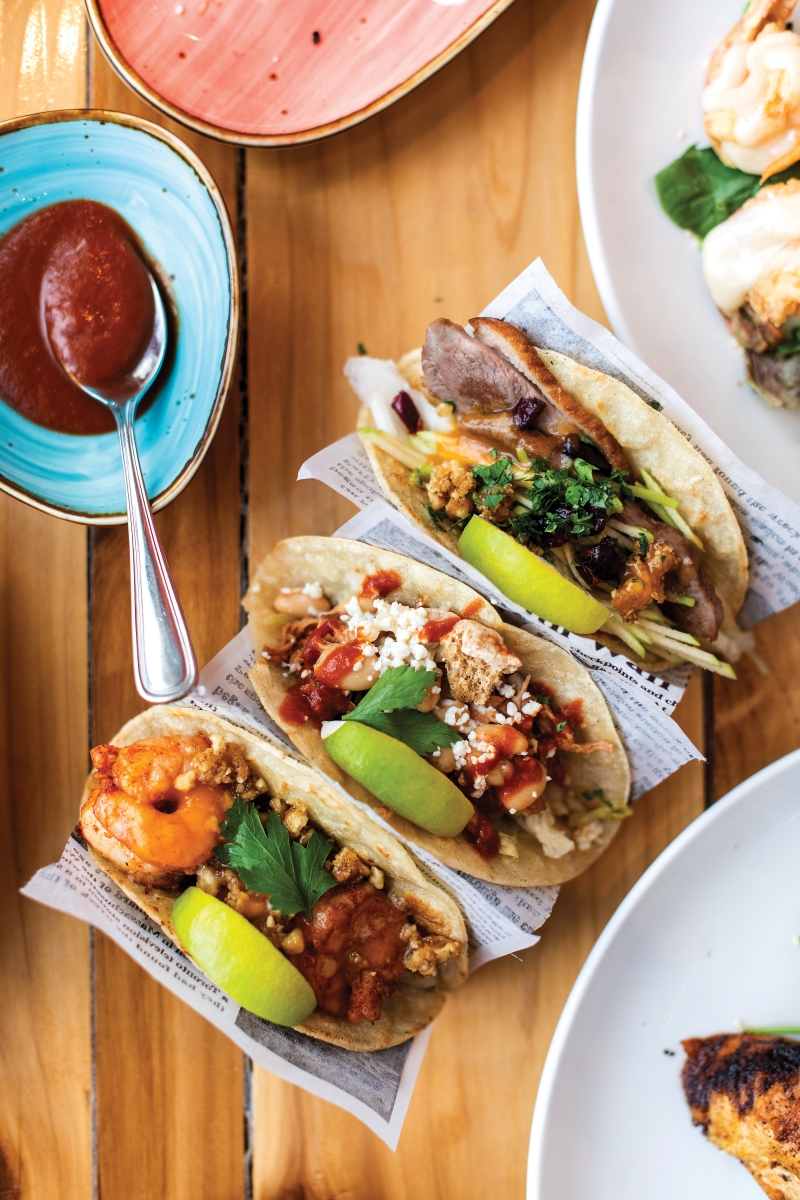 I asked chef Khowong whether any particular dish stands out, and without cracking a smile, he replied, “The whole menu is specialties.” We chuckled at what seemed like a dry sense of humor, but as we began tasting this dish and that, it quickly became clear that he wasn’t exaggerating much, if at all.

More traditional entrees range from a beautifully executed strip steak with peppercorn butter to the impeccable texture of the crispy salmon to a deceptively simple roasted chicken breast – the side of mole sauce elevates it tremendously. If you’re in the mood for straightforward Asian cuisine, the Taiwanese cold noodles are a refreshing summertime treat, and the sweet-spicy balance of the crispy orange peel chicken makes it perhaps the single best thing on the menu.

For a more a la carte experience, the gourmet tacos are an easy recommendation. Baja-style fish with mango black bean salsa, braised angus beef with avocado aioli and pickled cabbage, candied walnut shrimp with chili sauce and lime butter, even tender duck confit with slivers of granny smith apple and dried cranberries … each one is dazzlingly laden with bursts of flavor, and most (especially the pulled pork) go quite well with the accompanying Hatch chile sauce that is spicy for real. 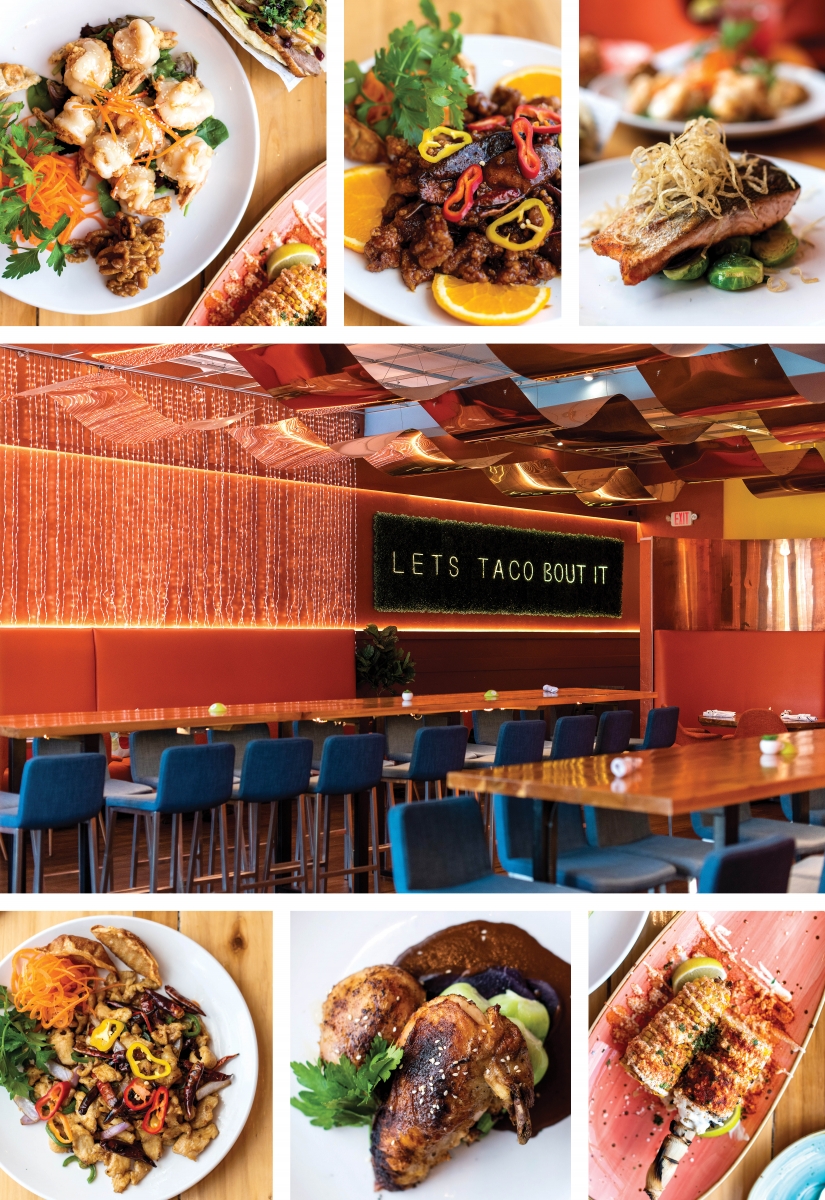 Plus, anything you order will benefit from the addition of some fried buns, fresh mussels or zesty elote from the appetizer menu, or a side of fried cauliflower, chorizo-laced edamame or the must-try sweet corn risotto. If it sounds as though I’m recommending most of the menu, that’s … well, largely accurate. In additional to being colorful and savory, almost everything is strongly tempting.

For those who want to play “Spot the Influences,” expect to see flavors and inspirations from China, Thailand, Japan and Taiwan – Asia is a big place – as well as Mexico and Latin America. Honestly, though, I wouldn’t worry too much about what comes from where; just order a lot and enjoy exploring Chigama’s idiosyncratic world of flavors

I make it a point to try menu items that bear the restaurant’s name – what clearer recommendation could you ask for? – so I’m happily in a position to recommend that you start your feast with an order of Chigama fries for the table. Think of a platter of hot, tasty cheese fries, but with three kinds of cheese, plus bacon, Chinese chorizo and frijoles, topped with jalapenos and drizzles of three different sauces. It’s delicious enough to be its own meal, but sufficiently spicy that it might be better shared. Trust me on both counts.