The City That Never Was - 405 Magazine 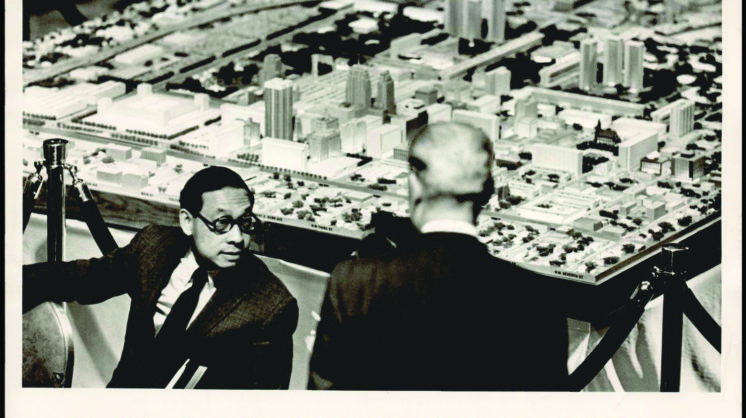 I.M. Pei is one of the most celebrated architects of the mid-20th century. His designs include the glass pyramid that forms the main entrance to the Louvre in Paris, the iconic Rock ’n Roll Hall of Fame in Cleveland, the John F. Kennedy Presidential Library and Museum in Boston and the National Gallery of Art East Building in Washington, D.C.

In 1964, city fathers, including the likes of Stanley Draper, Sr., Dean McGee and Ralph Bolen, formed the Urban Action Foundation to drive development downtown. The group paid Pei $200,000 to design a futuristic plan for the downtown business district that would embody the notion of progress and prosperity.

Pei returned with an ambitious proposal, grand in scheme, detailed in a 10-by-12-foot model.
The plan called for urban greenspace, high-rise office buildings, a theater, shopping and a convention center.

“Pei told civic and business leaders only the combination of offices and a financial district, a cultural and recreation area, a convention center and hotels, plenty of retail shopping, and housing nurturing each other would revitalize the central business district,” wrote Steve Lackmeyer, author of the book OKC: Second Time Around. “To get the job done, much of the old downtown would have to go.”

Architectural treasures such as the Criterion and Warner theaters, the Mercantile and Pioneer buildings, the Biltmore and Huckins hotels and the Baum building succumbed to dynamite and bulldozers, even though the Biltmore and Huckins were not among Pei’s intended victims.
The destruction, coupled with the lure of the suburbs, pulled energy out of downtown. By the mid-1970s, enthusiasm for Pei’s plan had waned and finally was abandoned in the 1980s.
“The last effort to do anything with the Pei Plan was the Galleria Mall parking deck that sat for 20 years waiting for a mall to be built on top of it,” Lackmeyer said. “Eventually the Devon Energy building was built there.”
But Lackmeyer said that Pei’s plan, while ambitious, was not completely to blame for the failure.
“His plan was very aggressive, but it also included some cautions to city fathers that were ignored,” he said. “I wouldn’t say it was overly aggressive as much as it was clumsy. They weren’t strategic in what they decided to tear down.”

Pei died last year in New York at the age of 102. While many of his architectural creations are heralded as the some of the most important works of the 20th century, sadly, Oklahoma City is not on the list.