The Crossroads of History - 405 Magazine 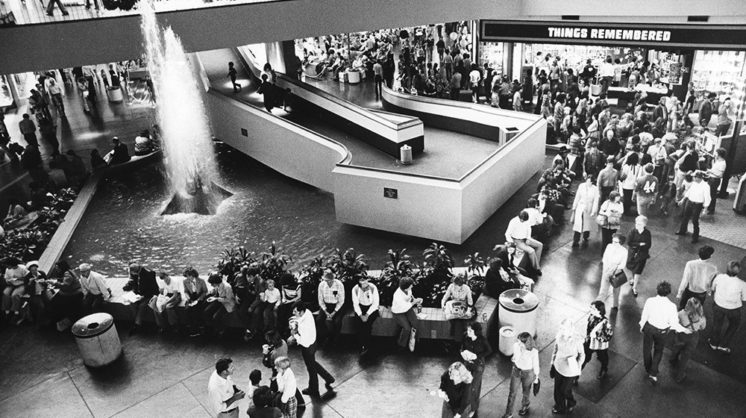 Back in the day, shoppers who wanted to hit the mall had a couple of choices. Penn Square, which opened in 1960, was all open-air … but that led some customers to complain that it was too hot in the summer and too cold in the winter. Shepherd Mall, built in 1964, let shoppers browse in a climate-controlled indoor space. But it, like Penn Square, was on what was then Oklahoma City’s north side.

Then came Crossroads Mall. The name was chosen because of the nearby intersections of I-35 and I-240, two major crossroads of Oklahoma City. It opened on Feb. 17, 1974, and the new mall provided a much-needed shopping destination for residents in that area, while drawing visitors from not just the metro, but across the state.

“As a third grader in 1976, I remember attending a birthday party at Farrell’s Ice Cream Parlor at Crossroads,” says Oklahoma City resident Starla Jones. “It was located right inside the front door by Montgomery Ward. They brought out a mountain of French fries and ice cream, and the ice cream cones turned upside down were made to look like clown hats. I have so many good memories of Crossroads during those years.”

When it was built, Crossroads Mall was one of the largest construction projects in the state. It was also among the 10 largest shopping malls in the country, with four major anchor stores that included John A. Brown, Dillard’s, Montgomery Ward and JCPenney.

“I remember my mother always shopped at JCPenney and Montgomery Ward, which my dad referred to as ‘Monkey Ward,’” Jones recalls with a laugh. “When I was a kid, I remember standing in the middle of the mall waiting in line to see Santa. Then as a teen, I recall throwing change in the fountain and going to the game room and driving the bumper cars. We would also walk through Hickory Farms and try out the samples they had sitting all over the store.”

Eventually, the mall went into decline. Crime and safety concerns in the late 1990s became an issue, as well as the loss of major anchor stores including Foley’s and then Macy’s. An attempt at re-branding as “Plaza Mayor at the Crossroads” even failed.

“I had not been to Crossroads for about five or six years,” Jones says. “The last time I went, very few stores were open, and I could tell it had seen its better days. It really was sad to watch its slow death through the years.”

The once magnificent mall known as Crossroads closed its doors permanently on Oct. 31, 2017.