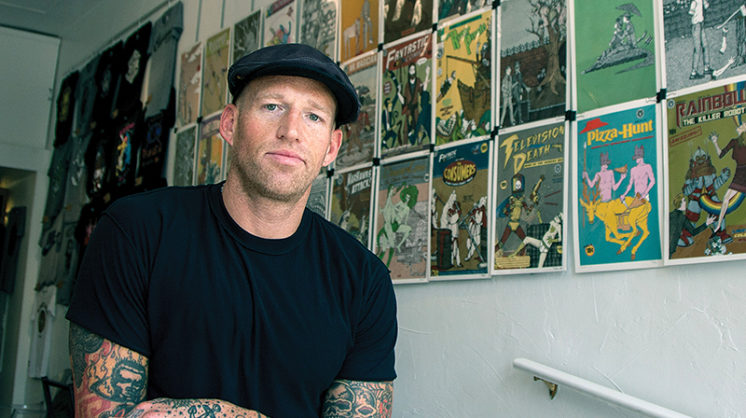 Dustin Oswald loves details. Open a copy of The Bloodied Past of Jingle Heimer S.V.S., his newest graphic novella, and you’ll find illustrated panels with line work so detailed it’s practically mind-numbing. In one particularly arresting image, a “pit of anger and vengeance,” the attention to detail is rivaled only by the Giger-esque intensity of the imagery.

“I love line-art-driven pieces,” Oswald says. “I love sitting down and composing the picture, but the detail drawing is fun; I get into this meditation-like state making tiny marks.”

Many illustrators and cartoonists use premade patterns to add texture to a frame. Who, after all, wants to draw 5,000 dots when you can buy a dot pattern? Oswald does. Hashmarks, dots, tiny leaves, stone structures, blades of grass – anything that requires a detailed pattern, he prefers to draw by hand.

In the frame that illustrates Jingle Heimer’s awakening, Oswald has him atop large rocks, looking out on a partly cloudy sky. It would have been clear they were rocks even without the detail, but Oswald saw too much white space. White space makes him anxious. He likes the patterns he uses to fill white space. Whether that is also a metaphor only he can tell; as it is, he won’t even discuss the amount of time it takes to illustrate one of those frames.

It’s far more than a day’s work, but the evidence of the labor doesn’t really need confirmation. Simply stand in front of the full-color “pit of anger” print at Oswald’s gallery in The Paseo, and you will get an idea of the tedium that becomes beautiful art. That gallery is Planet Dorshak, and in fact, the novellas are written under the name Dorshak Bloch.

Creating names and identities is just something Oswald has always done. Most readers are more likely to recognize another of his identities: Bombs Away Art. The T-shirts under that label are ubiquitous in Oklahoma, and they sell well outside the state, too. In the early days of Bombs Away, he and his wife Laura, along with a cousin, would sell the shirts store to store. Blue 7 was one of the first local partners, and they’ve been selling the shirts for 12 years. DNA Galleries has been on board for nearly eight years. 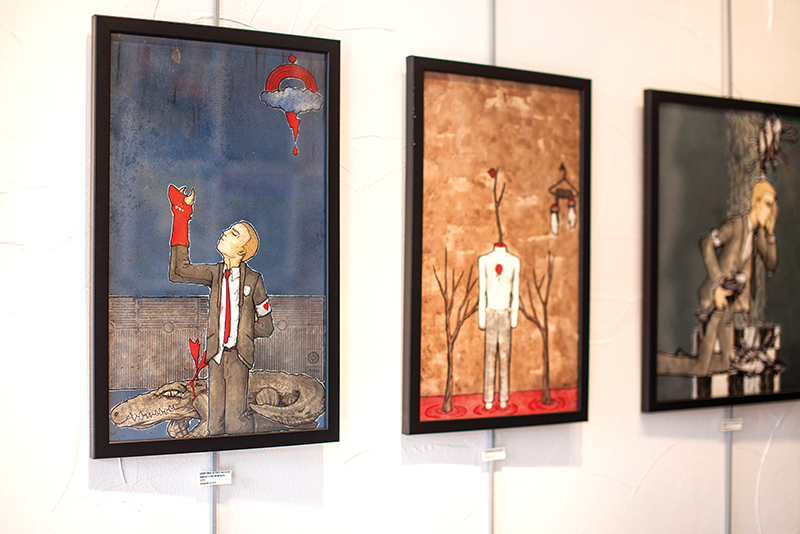 The Oswalds bought screen-printing equipment for $7,700 in 2004, using money that Dustin’s mother had won in had won in a Fen-Phen settlement. “I didn’t want to do commercial or commission printing,” Oswald says. “We started working on original designs from the very beginning.”

The turning point was probably the Osage shield design that is still the company’s bestseller. The apparel company doesn’t fund Planet Dorshak nor the graphic novellas, but it does make it easier to do art, and art is all he has ever wanted to do. The Apache High School (Apache, Oklahoma) graduate earned a B.F.A. in graphic design before heading off to San Francisco to be an artist. He burned through his savings while working two and a half jobs seven days a week.

“I came back to Oklahoma after I ran out of money,” he says. “I was angry and exhausted.”

That anger still seeps through in his art. His first graphic novella, The Story of Ivan A. Alexander, kicks off a series that includes Jingle Heimer, and both juxtapose images of stuffed animals and extreme violence. Oswald plans to create several volumes in the series – in addition to plans for two full-length graphic novels set in a different world – and the letting go of the anger is clear in the latest novella.

Using stuffed animals as surrogates made it easier to process the anger, and it is certainly easier to look at images of dismembered teddy bears as opposed to the human alternatives. This is not to say that the novellas are hopelessly grim; they certainly are not. Only the sloppiest reader could miss the note of hope at the end of Jingle Heimer, and there is beauty and wonder in all of Oswald’s frames, even the most disturbing of them.

One person not mentioned so far who certainly deserves notice is Joy Reed Belt. She has been an active advocate for Oswald’s style of art, as distressing as it can be to some, and her encouragement of him taking the Paseo location is to be commended, as he brings something decidedly fresh and evocative to a location that can at times be mired in the conventional.

The novellas are on sale at his gallery and online, and a collection of his original work will be on display and for sale on Oct. 14 at the MAINSITE Contemporary Art Gallery in Norman.