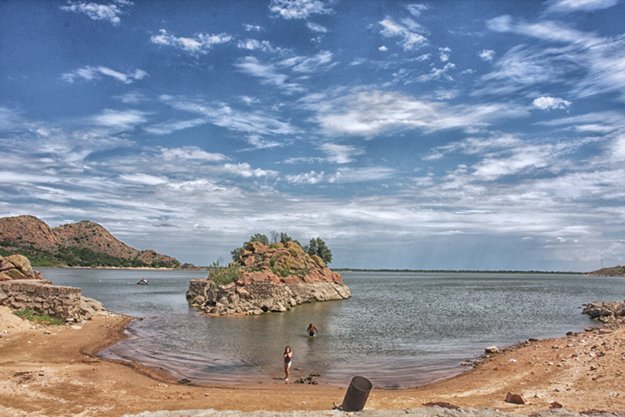 Once nearly 50 miles around, the reservoir in far southwestern Oklahoma often shimmers an improbable sapphire blue, cradled between contrasting rugged red and pink rock of the western Wichitas near Quartz Mountain.

Though the land is ancient, the lake has been around only 65 years. It was created after World War II by damming the North Fork of the Red River, once the natural boundary between Kiowa and Greer counties. The idea: control flooding, help out the water supply for the city of Altus, provide irrigation for crops, conserve fish and wildlife, and create a camping and boating area to bring in tourist dollars.

The lake now spreads a bit over both counties, covering more than 6,200 acres when full.

But it has not been full, not for a long time.

The waters are receding, decimated by drought. At the end of April, the lake was at 16.7 percent capacity. Water levels are more than 26 feet below normal. The rugged granite basin that has contained the lake appears streaked with outsized bathtub rings, marking the water’s steady descent.

Re-emerging from the bottom of the lake, the lost town of Lugert again bakes in the sun, its rectangular rock foundations far from shore. The early statehood boomtown, founded after a 1901 lottery opening the Kiowa-Comanche-Apache lands, was flattened 11 years later by a tornado.

The headline in the May 2, 1912, Hobart Republic declared “Lugert Erased From the Map,” reporting: “Lugert can properly be spoken of only in the past tense. It was.” Though the town’s namesake, Frank Lugert, rebuilt many of the structures, few of the survivors opted to stay. The town was condemned to the rising waters of the new dam, completed in 1947.

Today, Lugert has re-emerged. Bricks, broken crockery and beach glass are embedded in the moonscape of the old lake bottom, along with the crumbling foundations of the old buildings, demoting the ghost town from its previous incarnation as a mysterious Atlantis of the Prairie to a weed-strewn plain.

Walking from Lugert’s remains toward the lake shore, specks of what appear to be driftwood dot the beach. Dozens of pieces, it seems. Maybe hundreds. Drawing nearer, it becomes apparent the dots are not driftwood at all, nor remnants of the town beneath the lake. They are dead fish, washed ashore and left behind by retreating waters.

The fish were killed by a force more lethal than the 1912 tornado. Golden alga, a fast-growing one-celled plant, spread into Oklahoma by way of Texas in 2004. The carcasses are of crappies, catfish, bass, walleye, shad. The golden alga toxins, said to be harmless to birds and mammals, are deadly to creatures that breathe through gills, such as fish and clams.

The state has canceled this year’s trout fishing season for the area, opting not to keep stocking rainbow trout in waters where the fish are doomed.

“The records go back to the 1890s, but you can look at things like tree rings to see it’s pretty specific the way the cycle goes. It was dry in the ’10s, the ’30s, ’50s, the ’70s, and goes up in between. But then we got into a real wet cycle from ’83-’97. So when things got back to normal, and then started getting real dry again, it seemed a lot worse. Then we dropped into a spike drought in 2011, and extreme drought has been going on ever since … we don’t know what’s going to happen next. Keep your fingers crossed, and pray for rain.”

The lake remains square in the darkest area of the Oklahoma drought monitor map.

The boat ramps are closing.

Editor’s Note: This is the 10th installment in a continuing series as author and photographer M.J. Alexander chronicles her travels across the state of Oklahoma.