The Fellers Family: At Home With Charm - 405 Magazine 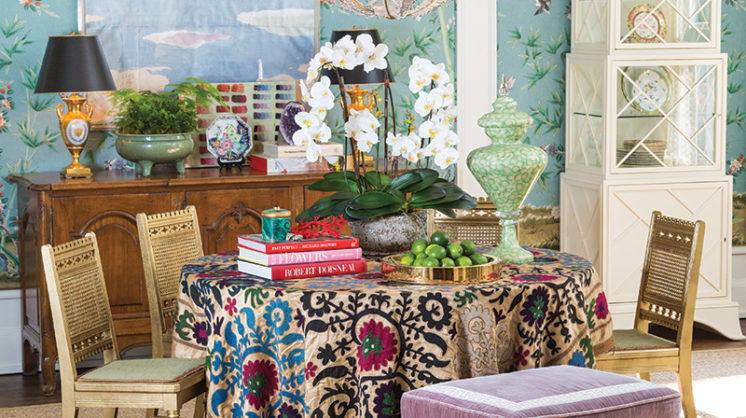 Charleston, South Carolina, is where Carter and Fred Fellers III met, fell in love and married. So when the pair moved to her stomping grounds of Oklahoma City, they searched for a home in an area with charm as similar as possible to Charleston, Fred’s hometown. The hunt began for a historic home with a porch, mature trees and a settled, close-knit neighborhood. This family ultimately found its perfect nest in Heritage Hills, one of Oklahoma City’s oldest neighborhoods. Happily, they felt right at home, right away.

Heritage Hills is the first Historic Preservation District in our state. Its first home was built by Henry Overholser in 1903, when the city was only ten years old — a mansion built on a grassy knoll, and in view of the State Capitol. Soon other state leaders (including such notable names as Colcord, Hightower and Hale) built their homes there. Now, Heritage Hills is just blocks from cultural destinations including the Oklahoma City Museum of Art, the downtown business and convention area and entertainment districts such as Bricktown.

In 2013, the couple purchased their 1915 Heritage Hills home – and although it needed renovation, they adored it. One particular feature they immediately loved was that it did not have small, closed-off rooms like some homes of that period. “The house in general has light,” says Carter. “The house is symmetrical, so the natural light pours in.”

As an interior designer at Carter S. Fellers Designs, she wanted to keep the home’s warmth and tradition, but update it to be fresh and young for their family with two young children. Timeless design was the mantra for the year-long renovation. Fellers, who has always enjoyed cooking, is pleased with her new kitchen, and recalls how drastically the room changed: The kitchen was gutted in order to make room for the fully integrated refrigerator and pantry, and a second staircase to the upper floor and a butler’s area were eliminated. Now the kitchen has a roomy island that is a natural gathering place for people to eat, drink and chat, as well as a place for the kids to watch and participate in mom’s meal preparation. “They hop up there and help,” Fellers chuckles. “As much as they can help.”

The main living area is a popular place for the family to be together and interact. This is where design and day-to-day living can bump heads. However, Fellers’ expertise has helped her develop a point of view that works for real life. She emphasizes in all her designs that a home can be beautiful while still being livable. A prime example is the Fellers’ living room. It is gorgeous and comfortable while continuing to be a preferred place for her family. “I wanted to make this room young and fun,” she smiles, “because we are a family with two young kids.” Form and function live in harmony here.