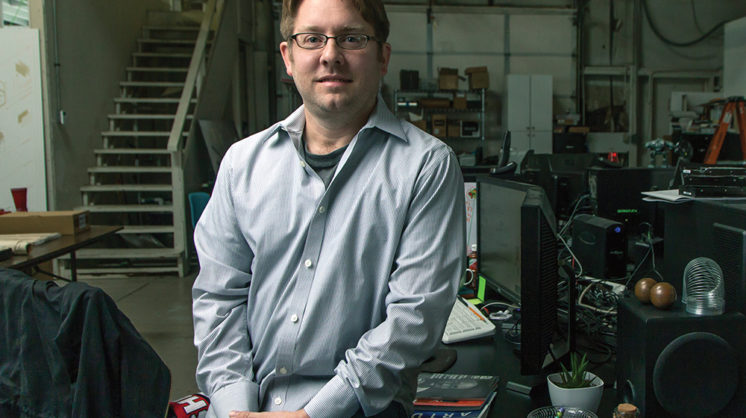 It was the dawning of a new millennium when Skyline Ink set up shop in Oklahoma City back in 2000. The animators and illustrators have been creating compelling images and works of art here for 17 years, and are getting ready to expand once again. Some of the nation’s top businesses – from Disney to GE, and many more Fortune 500 companies – have used Skyline.

“We believe in the power of a story with lasting impression,” says Skyline owner and CEO Brian Eyerman. “We could not be more proud of the creative working relationships we have built. It is such an honor to be part of designers’ and innovators’ teams to share their vision.”

Skyline Ink was created at a time when few local architects used computer renderings to translate their designs from technical drawings to familiar forms. As the only full-service architectural visualization studio in the area, Eyerman challenged his clients to embrace the new possibilities for presenting their designs using animation.

“In the beginning, the challenge was pushing the limits of computer processing power to produce an artistic image comparable to a watercolor or tempera rendering,” Eyerman says. “Now, we push the hardware and software limits to tell a project’s most captivating story, creating exceptional realism and artistic effect in animation and even video game and virtual reality systems.

“Back then, showing landscaping could involve a huge task of generating 100,000 blades of grass. Now we generate hundreds of billions.”

Today, Eyerman said architects routinely use computer renderings, animation and interactive presentations to present designs to clients and compete for design contracts. They work with manufacturers and innovators to introduce new products, and sometimes even provide safety training. Developers and promotional teams also use these tools to raise funds for building projects, pre-lease properties and help generate interest in public projects.

Eyerman founded Skyline Ink after completing architecture school at the University of Oklahoma. He said his knowledge of computer graphics was largely self-taught while creating class presentations at OU. His company has grown from a couple of architecture graduates and one computer to a team of eight, with areas of expertise ranging from architecture to computer programming and communications.

“Many hand-drawn or painted architectural renderings are creative works of art in their own right,” he says. “Just as traditional techniques inspire and inform, my goal has always been to find the most engaging, creative way to present the unbuilt design.”

Later this year, Skyline Ink’s expansion means they will be moving into new digs near Bricktown.

“We’re really excited to be part of another OKC landmark with our upcoming relocation,” Eyerman says. “The move is planned for late summer or early fall. Our new space will be in the smaller grain elevator, next to the rock climbing grain elevator on the Bricktown Canal. Mark Ruffin and Bobby Newman are doing great work to repurpose this relic, and we can’t wait to make it our new creative place. The raw concrete columns, open floorplan and history of the structure combine with terrific views of OKC’s progress and heritage.”

The illustrious company has been recognized by the Telly Awards, as well as the American Society of Architectural Illustrators. And Eyerman said they are proud to be in the heart of Oklahoma City.

“Local highlights for us have been helping share the vision of our changing city for nearly two decades,” Eyerman says. “From Midtown Renaissance and Lower Bricktown to the Oklahoma Boathouse District and MAPS 3, we’ve had a blast helping our neighbors see the exciting potential of these projects – long before they break ground.”