The Future of the Oklahoma City Thunder - 405 Magazine 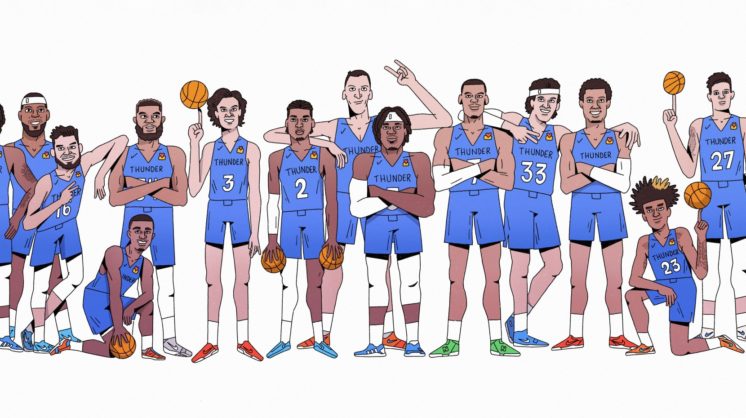 The Oklahoma City Thunder is one of the most resilient franchises in the NBA. Dating back to the 2017 Russell Westbrook season, these teams don’t lay down after being down by double digits, or far from the top of the league standings.

The Chris Paul-led Thunder of 2019-2020 seemed destined for a woeful win-loss record and a pick in the draft lottery. But after just 20 games, it was clear this team was in it to win, resulting in a 44-28 record and a playoff berth, culminating in a dramatic Game 7 loss in the first round to the Houston Rockets. Last season, without CP3, the Thunder were expected to go 15-57. While they barely overachieved, going 22-50, they were on the path to a possible playoff play-in berth if they had remained on the pace they were on before the All-Star break and some key injuries.

This season, OKC got off to a pretty productive start and has been more competitive than many thought they’d be—though preseason Vegas predictions had them as the worst team in the NBA. The constant growth into stardom for OKC’s fourth-year franchise player Shai Gilgeous-Alexander, the outright emergence of Luguentz Dort as one of OKC’s cornerstone pieces, and Darius Bazley’s development into an increasingly reliable player, along with the production of OKC’s outstanding rookie class headlined by #6 pick Josh Giddey, puts the Thunder in a unique position.

Some fans are advocating for “tanking”—stack- ing the deck against your team in the hopes of losing as many games as possible so your draft position improves—but should they be? Should the Thunder end this season much like last year and hope to get a top-three pick in the NBA draft, or should they look to package a portion of their plethora of picks to acquire an already proven yet young big man to complement this future all-star backcourt?

You’re entitled to your own opinion on this topic, but if the Thunder are looking to grow this team organically and fully develop their championship-caliber team, they’ll continue to build through the draft, more than likely looking to draft a marquee big man like Paolo Banchero out

of Duke, Chet Holmgren from Gonzaga, Jalen Duren from the University of Memphis, Nikola Jovîc from Serbia, or another player we’ve seldom heard about.

This method is fine and, depending on the personal opinion, it could be the correct way to go about things. Going along with the rebuild would allow the Thunder the freedom to draft a player they believe is tailor-made for the current roster and develop him accordingly.

However, with SGA in his fourth season aver- aging 22.6 points, 5.2 rebounds, and 4.2 assists per game, and an all-star caliber player already, do the Thunder have time to develop their final corner- stone piece without wasting his prime? True, Shai is signed to the Thunder through the 2026-27 season, but if there’s one thing we’ve learned in OKC, it’s that these players aren’t always bound to the team with which they signed a contract.

An easy way to avoid all of that would be if OKC used some of their draft assets to pursue an all-star or fringe all-star big man through a trade. Karl-Anthony Towns has been an intriguing name associated with an OKC trade if he ever became available. But a more realistic situation would be a guy like Marvin Bagley, who’s in the middle of a messy situation with the Sacramento Kings, or Deandre Ayton, whom the Phoenix Suns have neglected to lock up with a rookie extension thus far.

A few other names may float around, and each year there’s a new disgruntled player in the NBA, so OKC could feasibly go that route and potentially be more in line with where SGA, Dort, and even Giddey are already in their development.

Regardless of what this article says, Sam Presti’s way is probably the right way, so whichever direction he goes in, I implore you to trust it. The Thunder are in great hands, and the future is bright!