The Gikas Foursquare: A Study in Contrasts - 405 Magazine 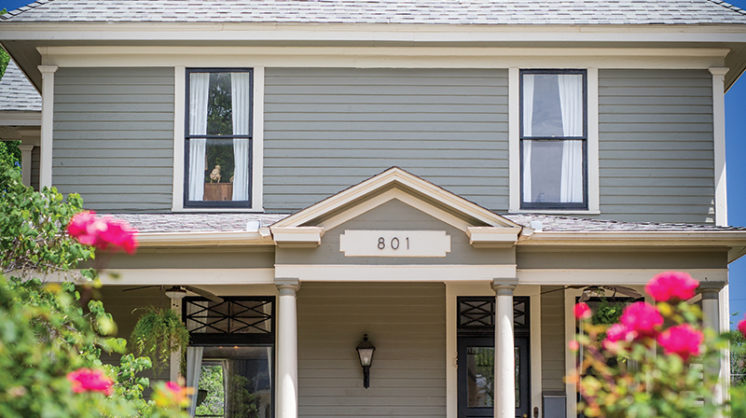 In 1996, After Nearly Nine Decades In Its Original Location, This American Foursquare Was Moved To A Corner About A Mile Away. Ryan And Catherine Gikas Bought The Home In 2010, And With Designer Ashley Whiteside And Carpenter Jeremy Miller, The Couple Developed A Comprehensive Renovation Plan That Would Take Advantage Of Its Best Features: Access To Natural Light And A Shape That, Once Simplified, Creates Large Open Areas That Connect Rooms Fluidly.

The traditional Foursquare home is a minimum of two floors, both subdivided into box-shaped rooms, creating cubes within a cube. Removing walls or closets and widening doors opens the space, allowing for a more expansive feel. The central dormer is typically located in a half-attic and serves as a decoration that breaks up the “box-with-a-hat” look created by the hipped roof. One of the primary emphases of these post-Frank Lloyd Wright designs is the abundance of vertical lines. The extended eaves draw the lines out beyond the edges of the central box.

The Gikas home has a classic variation of the Foursquare inasmuch as the front door is off center, which means the lantern sconce porch light is the point of focus at night. Otherwise, the pediment above the small portico directs the gaze upward to the dormer in an unbroken design of geometric symmetry. On the west side, the front porch wraps slightly, creating a small, semi-private space.

As with the interior, neutral and natural tones on the exterior allow small accents of color, like the double knockout roses, to really pop. The black latticework beneath the porch creates another geometric variation of boxes.

The original floor plan comprised only 1,800 square feet, and the entire area under the stairs was a “labyrinth of doors and closets,” according to Ryan. Choosing white as the predominant color allowed him to treat the house as a blank palette. 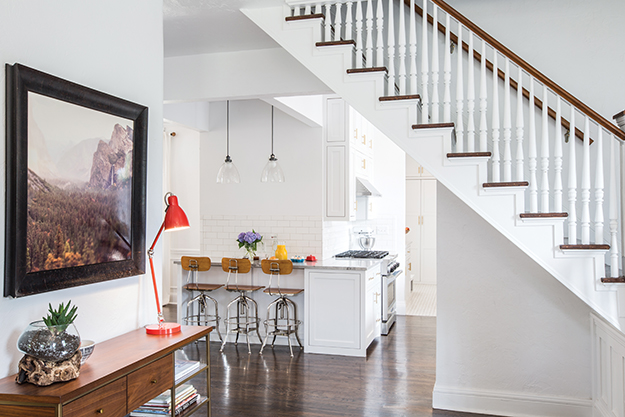 The staircase bisecting the first floor creates an arresting tablea as soon as you walk into the house. All the horizontal lines, right angles and nested boxes from front to back are slashed through by the staircase. Bright explosions of color from flowers, a desk lamp and original artwork set the tone for every area of the house.

“White allowed us to manipulate how each room feels by using small elements of color strategically,” Ryan said. “Many of our accent pieces or splashes of color would have simply faded into the background in a more colorful room.”

As it is, fresh flowers, art prints and even a lamp show up as bursts of color, breaking up the room and preventing the white from registering as too modern or too stark. The white draperies allow the natural light to flow into all the rooms, even as they match the overall concept. Furniture and rugs – with the exception of the kids’ rooms – are crafted of natural materials in colors ranging from ecru to the dark grains of the black walnut woodwork. Bright colors thrive because they are not competing with each other, and an otherwise sterile environment becomes alive with color.

Catherine Gikas said they also wanted to use metal and wood as accents to stick with the natural theme and to bring warmth to the rooms. “You can tell we love antique, brushed brass,” she said. “We spent a great deal of time finding the brass fixtures for the sinks.”

Whiteside assisted in the process by helping the couple work through their selections. “We knew what we wanted,” Ryan said, “and so after we chose elements, Ashley told us what would and would not work based on the overall scheme, size of the room, lighting and factors like that.” 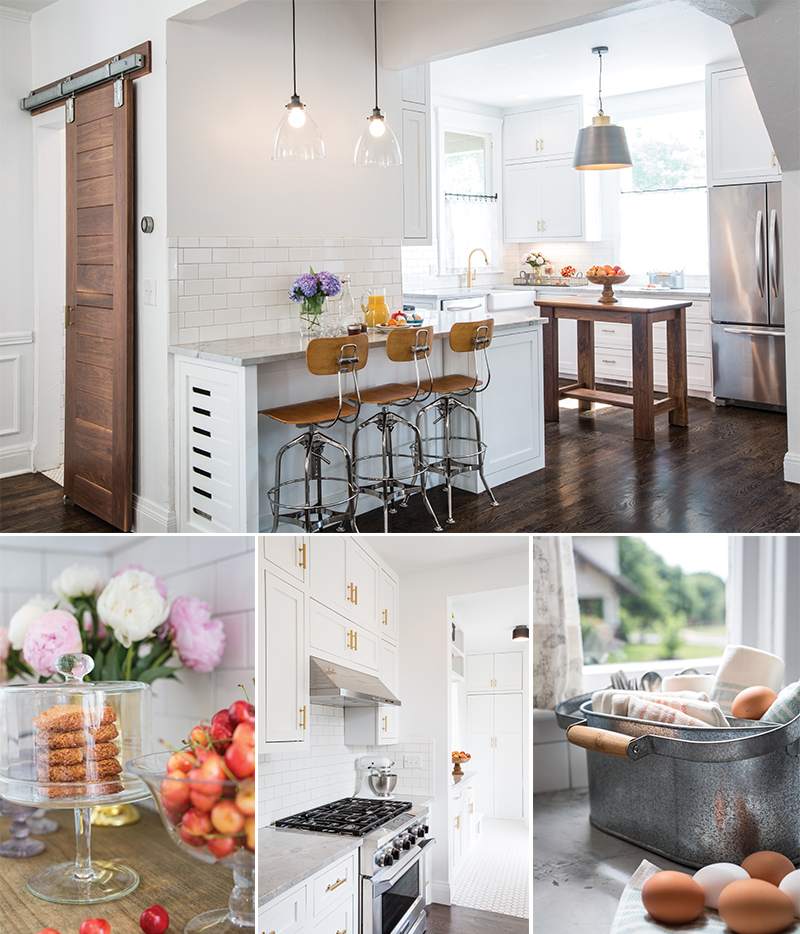 By removing closets and doors under the stairs and between the living area, kitchen and dining room, the breakfast bar sits directly at the transitional point between kitchen and dining area. Rather than small, boxy rooms, the entire area becomes common space with natural delineations in function.

One of the pleasant surprises in the Gikas home is the mixture of expensive and inexpensive elements. An original midcentury modern Brasilia: Broyhill Premiere credenza that functions as a dresser fits as neatly into the design scheme as a jute rug from Pottery Barn and a sock monkey from Learning Tree. The couple chose tasteful elements they liked and that worked irrespective of their provenance or price, including original art from Ryan’s uncle.

The team made an early commitment to modernize the house without changing the architectural characteristics of the era in which it was built: 1908. By removing walls and closets, the space opened up, maximizing light and connectivity both in terms of spatial connections and personal connections; the rooms flow into each other, and much of the downstairs space is visible from all over the first floor.

Using white in the bathrooms also contributed to the illusion of additional space. The white tile, shower curtains, fixtures and paint draw and magnify the available natural light, helping to overcome the closeness that results from the boxy, utilitarian design. Brass also reflects the light and adds a golden tone, helping mute the sterile, modern whiteness. 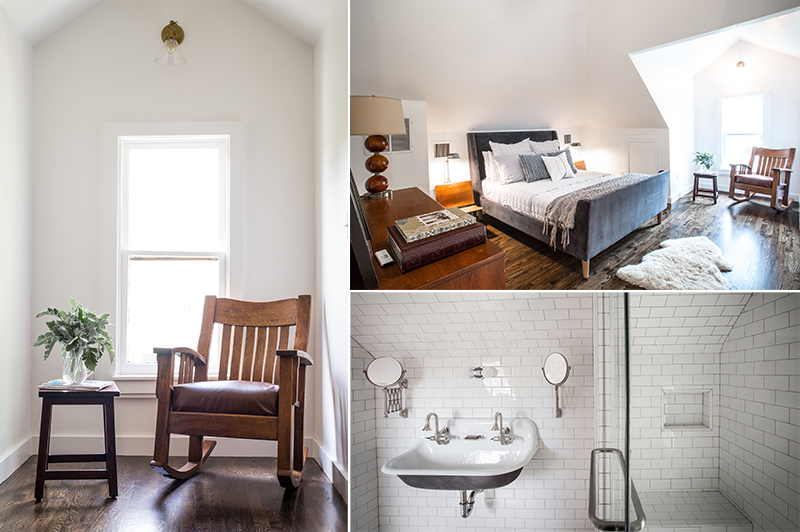 The master bedroom contains some of the finest features of the house, including the reading nook. Ryan said the couple wanted to make the nook functional in part because the view is beautiful. The window faces south, so the Devon Tower is in clear view as it dominates the metro’s cityscape. The space was converted from a half attic to a third floor, so the hipped roof’s angles create remarkable geometric variations in the room, including the small master bath cleverly tucked in a corner. The credenza functions as the couple’s dresser, and all the elements create a warm, soothing haven.

A third floor was added during renovation, making the central dormer functional rather than merely decorative. It is now the reading nook in the master bedroom. The plumbing and wiring were updated when the house was moved in the ’90s, so most of the renovation focused on interior design and aesthetics.

Jeremy Miller used black walnut for the wood features he created, including the sliding bathroom door, bookshelves and live edge mantel in the living room. Ryan said they ordered a “giant slab of black walnut” from a mill in West Virginia, which means Miller was able to create wooden features from the same source; the grains and tone of the wood are all complementary. 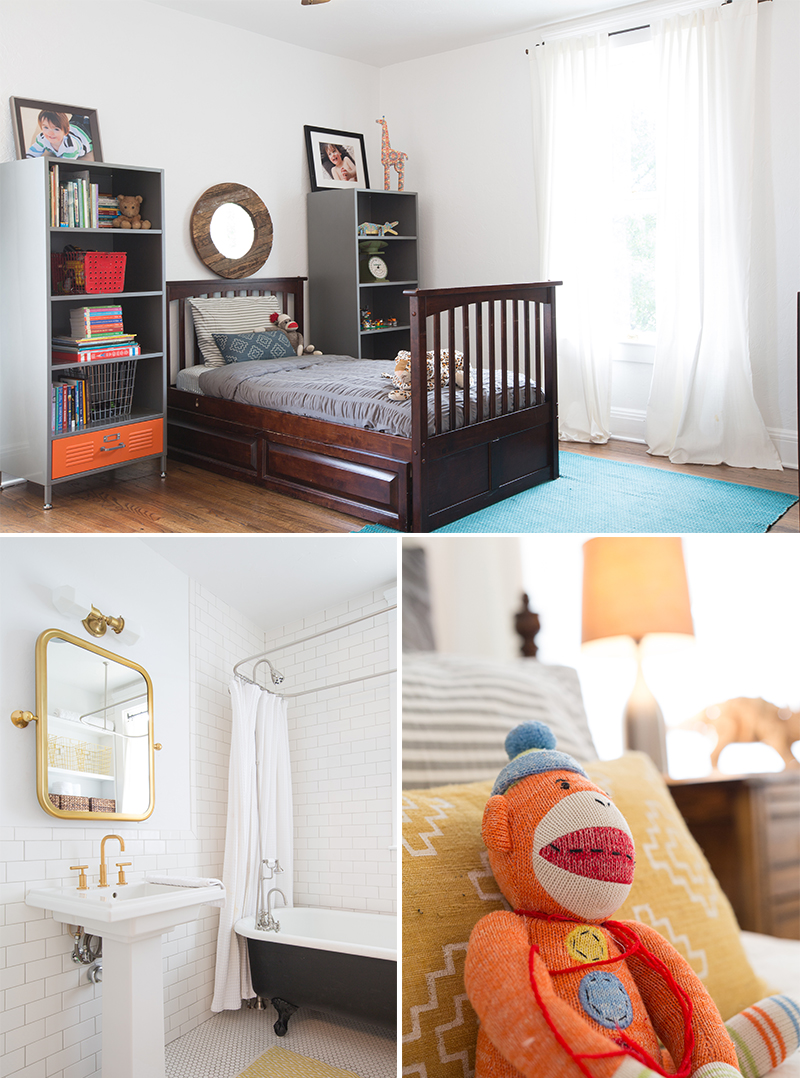 Top: Although they are the most colorful rooms in the house, the kids’ spaces still rely on splashes of color rather than a colorful paint theme. The white curtains are here, too, to maximize natural light, and bright colors from books, toys and rug add energy and vitality.

Bottom left: Classic old-house finishes like subway and hexagonal mosaic tiles paired with a pedestal sink and claw-foot tub complement the age of the home, but a modern color palette punches it up with today’s design cachet.

As of press time, the house now has new owners who will move in sometime in September. The Gikas family has decided to relocate to acreage on the edge of the metro. “We didn’t renovate with plans to move,” Catherine said. “In fact, it was such a hard choice. We love the house, but with three small sons, we thought it would be good to give them outside space, so we bought land with tons of trees.” 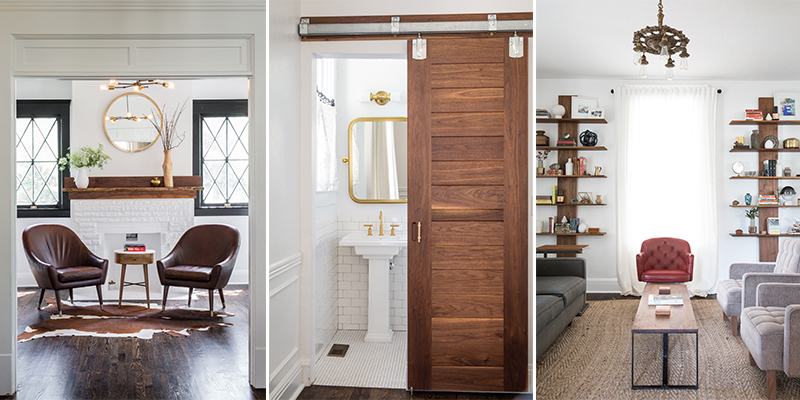 Left: This room is clearly designed for comfort and conversation. No electronics dominate the room. Rather, a jute rug sets the rustic, homey feel. The bookshelves, made from the same black walnut slab as the mantelpiece and the bathroom door, are the house’s most modern touch, but only in terms of their minimalist design. They are sturdy and functional, and the use of real wood keeps the warm, natural feel even as their lines are clearly contemporary.

Middle: Miller’s sliding bathroom door requires minimal space when open. Because it slides over the adjoining wall, it frames the pedestal sink and the brass accents that the Gikases love, creating a showcase of the design strategy in microcosm.

Right: The furniture here is arranged for conversation — reflecting the desire for connectivity that the couple was striving for throughout the home. Nearly every element of this room is natural, including the hide rug, the leather chairs and the plants on Miller’s live edge mantel.