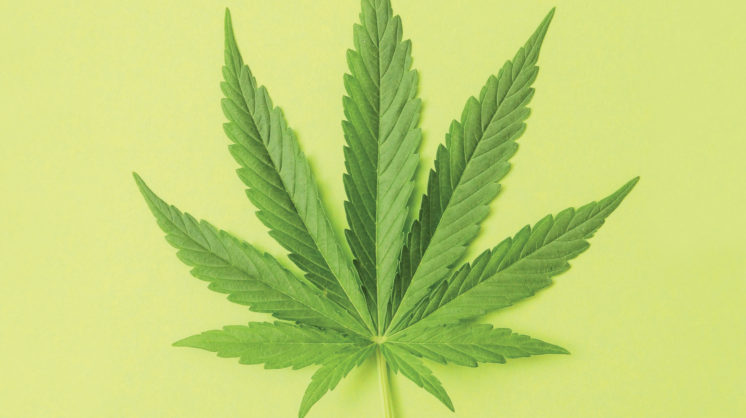 Walking into Apco Med’s main room, you’ll find a clear indication that the cultural conversation around marijuana is shifting quickly: A pleasant woman greets you at the door and points you to a counter at the back of the main room, where two women are waiting to assist you.

“That’s my mother at the door,” says founder and CEO Ford Austin. “She kicked me out of the house at 16 because I was selling marijuana. Now, she’s the greeter here on Fridays.”

Once a hair salon, Apco’s facility has been renovated to be open, bright and welcoming. Comfortable seating is to the left of the door; apparel, glassware and CBD products are to the right. An armed security guard stands at a lectern at the back of the main room, a metal door behind him marking the entrance to the dispensary proper. 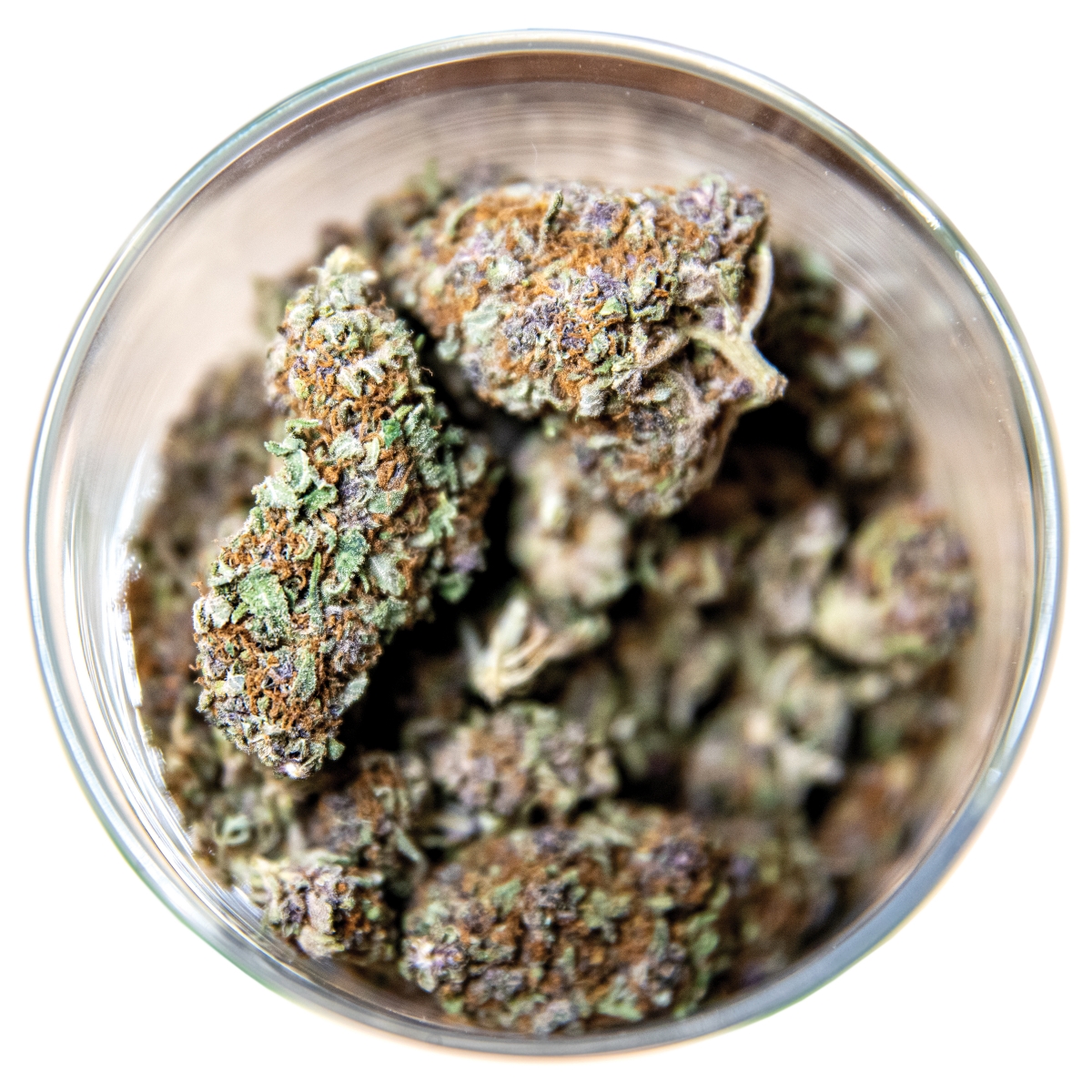 “We hired people from the service industry to work the front of the building,” Austin says. “In some ways, I think that’s what’s missing from healthcare, so we designed an experience that’s more consistent with cannabis culture. Most dispensaries are utilitarian; they’re counterintuitive to cannabis culture, so we created more of a community center model.”

Austin was born at St. Anthony Hospital, but a good part of his life has been lived in California, where he’s been working as an actor since he was 15. Along the way, he’s directed films and television, and since 2010, he’s held the CEO title at Apco Oil, a company his grandfather founded decades ago.

“I don’t want to be tied to one single industry,” Austin says. “We diversified so we weren’t slaves to oil.”

The transition from CEO of an oil company and entertainment industry professional to dispensary owner is not as surprising as you might think. One year after the state legalized medical marijuana, it’s clear that Oklahomans are finding ways – especially if they have the money – to create services and products targeted at the cannabis industry. Growing and selling are only two features of this exploding industry, and much like its near cousin alcohol, the industry is so much more than distillers and liquor store owners.

There has long been a series of micro-cultures built up around marijuana – stoners, athletes, celebrities, healthcare patients, chronic pain sufferers, artists looking for inspiration – but now the industry is trying to recreate itself as a respectable cultural expression. We’re also witnessing medical marijuana offered up with a bit of a wink, as it’s a near-universal observation that at some level the industry growing up around medical marijuana looks a great deal like an industry preparing for recreational marijuana. After all, where are the community centers and yoga studios built around Xanax culture or Zoloft culture?

Most Oklahomans seem to be OK with the wink, as if we’ve finally arrived at a population landmark such that the majority of people who buy, vote, build businesses and raise families aren’t outraged by the idea of recreational usage. Even if medical marijuana is the proverbial camel’s nose in the tent flap, the industry is reshaping the state in profound and profitable ways, so we offer here a survey of what Oklahoma looks like a year later … and without the predicted end of the world arriving with the passage of legal marijuana.

Aside from dedicated stoners and drug dealers discussing kind and quantity, the only conversations we used to have about marijuana were of the legal versus illegal variety. While those legal conversations are likely to define the subject of medical (and recreational) marijuana to an increasingly lesser degree over time, for now it is still a strictly regulated industry, and law enforcement in the state is adjusting to the new reality. 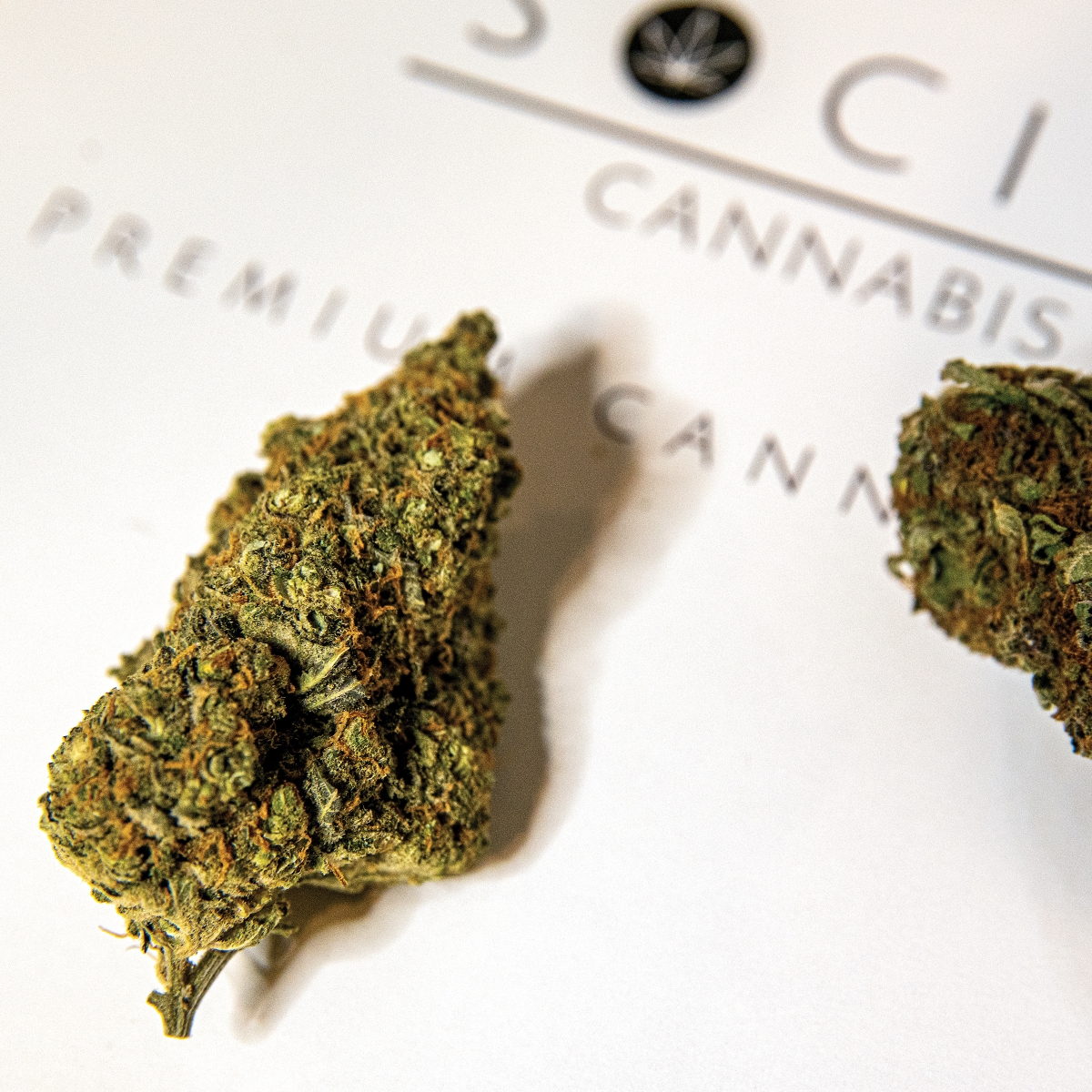 Daniel Boyington was at a marijuana conference when he noticed that aside from tees related to a specific business – the kind of stuff-in-a-drawer tees that everyone gets at trade shows – no one was offering nice apparel.

“I didn’t have the money to open a processing or growing operation,” Boyington says, “but I could do apparel.”

Boyington and his business partner Brent Baxter knocked out three custom designs, and Boyington put the shirts on his neighborhood Facebook page. He lives in an upper middle-class suburban neighborhood, so when he sold 33 shirts almost immediately, he thought, “If people in this neighborhood will buy these shirts, people in the cannabis industry will buy a lot of them.”

Sure enough, less than a year later, Tokie Tees is on track to sell more than 100,000 shirts a year. Their shirts are in approximately 40 dispensaries, and Boyington and Baxter have partnered with a local screenprinter to offer custom shirts for growers, processors and other cannabis businesses.

“I just realized that there is money to be made serving the cannabis industry, even if I couldn’t afford to be part of the production chain,” Boyington says.

That’s a philosophy that’s likely to affect business models around the state, including businesses that already have an established market. To borrow a perhaps-overused business term, cannabis is creating opportunities to pivot.

“I’ve been pleasantly surprised at the way much of law enforcement is buying in,” Hill says. “I was afraid they’d find bulls*** ways to turn misdemeanors into felonies, but they haven’t. And we’ve seen no prosecutions of anyone with a marijuana card.”

Even with uncertain areas, such as probation and parole, there are signs that law enforcement is adjusting well. “The issues have varied county to county,” Hill says, “but some counties don’t care about the failed urinalysis tests, as long as the person has their card.”

On the business side of the law, Oklahoma has definitely turned a very important corner. Apco is, according to Austin, the first dispensary in Oklahoma City to be using only Oklahoma-grown marijuana. “We had a gray market for a while,” he explains. “Everyone knew that when the dispensaries opened, the marijuana on the shelves didn’t come from Oklahoma,”– it’s illegal to transport across state lines – “but everyone went along with it.”

As of June 1, the number of licensed growers in the state was approaching 3,000. Factor in dispensaries, processors and patients, and the number of residents and businesses affected by marijuana laws is close to 200,000. Elizabeth Dalton, attorney and partner at McAfee & Taft, said over the past year she’s been focusing more on business law related to the cannabis industry – primarily, that means keeping her clients in compliance with state laws. Federal laws are another issue, and the key component of that is how marijuana businesses can do their banking when they are in violation of federal laws.

“Banking is still a problem issue,” Dalton says. “There are banks that are taking on marijuana customers. There is one in Arkansas, and at least one Savings and Loan in Tulsa. For now, it’s still very expensive, and the banks have a heavy burden of diligence. I expect it will get better as people get more comfortable with legal marijuana.”

Dalton said the cannabis-based businesses are carefully watching the Secure and Fair Enforcement (SAFE) Act, a piece of federal legislation that has the support of attorneys general from 33 states and five territories. The SAFE Act is the first major standalone piece of federal legislation related to cannabis, and it could revolutionize the industry by protecting banks that service the cannabis industry. As of press time, Congress has not voted on the bill.

“I think there are so many medical benefits to marijuana, and I wanted to offer people a quality, trustworthy line of products as a way of helping them. I’ve never been a fan of pharmaceutical approaches to wellness; I like the more natural approach.” – ALLISON DAKE

When bakers start adding THC to their batters, it’s clear we have reached a tipping point. No other cooking-related activity is as sure to garner pleasant memories across all demographics: cookies, cakes, pies, bread … the smells of childhood, and a practice that’s more ubiquitous in Americana iconography than any other kitchen scenes.

Allison Dake started Brown Egg Bakery nearly 10 years ago, after a long career in fine dining in California, Oregon and Oklahoma. Her Deep Deuce office is open by appointment only, and her birthday and wedding cakes have a loyal and vocal fan base. She announced in May that she was starting Buddha Belly Edibles, a second company that would focus on adding THC to Dake’s products.

“I think there are so many medical benefits to marijuana, and I wanted to offer people a quality, trustworthy line of products as a way of helping them,” Dake says. “I’ve never been a fan of pharmaceutical approaches to wellness; I like the more natural approach.”

Dake and her partners started off with a modest goal: target 15 percent of existing dispensaries with caramel popcorn, cookies – including macarons – and a line of Little Debbie-esque snacks approximating Star Crunches, Zingers and Twinkies. Eventually, she hopes to add a line of frozen and take-and-bake products.

Stats from the Oklahoma Medical Marijuana Authority, as of June 3, 2019:

We asked her if she was worried about more traditional Brown Egg clients responding negatively to Buddha Belly. “I admit that it’s a balancing act,” she says. “Some people are never going to be okay with marijuana, but the main question I’ve had is, ‘Do you have separate kitchens?’ And the answer is, ‘Yes, absolutely.’”

Her initial batch of salted caramel macarons had 10mg of THC, an amount that Dake said would create a “pleasant high.” That’s as much as you’d get in a single THC gummy bear at most dispensaries, and is generally considered a standard dose for edibles – however, it’s certainly worth verifying the dosage of any edible beforehand. They require more time to take effect than smoking (so caution is indicated to keep from taking too much), but they also last longer, often between 4-8 hours.

“It’s a dosage that allows you to keep working, and because it’s in the batter, it distributes evenly throughout the cookie. Every bite and every product is consistent.” 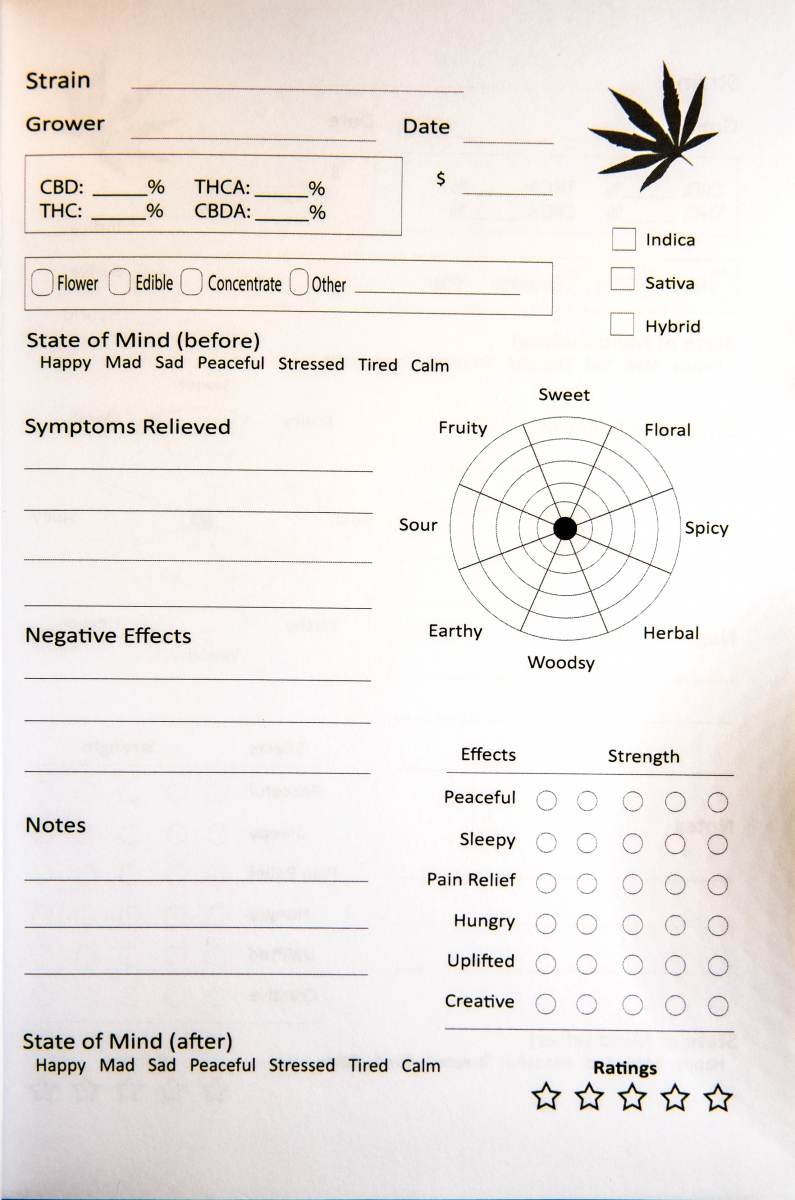 One of the most prevalent topics of conversation surrounding marijuana – and practically everyone who gets smoking-related social anxiety has heard it – is that there is a difference between the psychoactive effects of the two varieties of the plant, Cannabis Sativa (which purportedly keeps users more energetic) and Cannabis Indica (said to be the more stupor-inducing strain). But more recent research indicates that might be an exaggerated distinction: In an interview with the National Institute of Health, board-certified neurologist and psychopharmacology researcher Dr. Ethan Russo avoided technical jargon when commenting on the alleged divide.

“There are biochemically distinct strains of cannabis, but the sativa/indica distinction as commonly applied in the lay literature is total nonsense and an exercise in futility,” Russo said.
Russo attributed primary difference in reaction to the individuals themselves and the presence of another chemical family, terpenoids, in marijuana. Unfortunately, the effects of terpenoids on marijuana users is a grossly understudied field. Russo concludes with, “ … I would strongly encourage the scientific community, the press and the public to abandon the sativa/indica nomenclature.”