The Heart of Soul Food - 405 Magazine 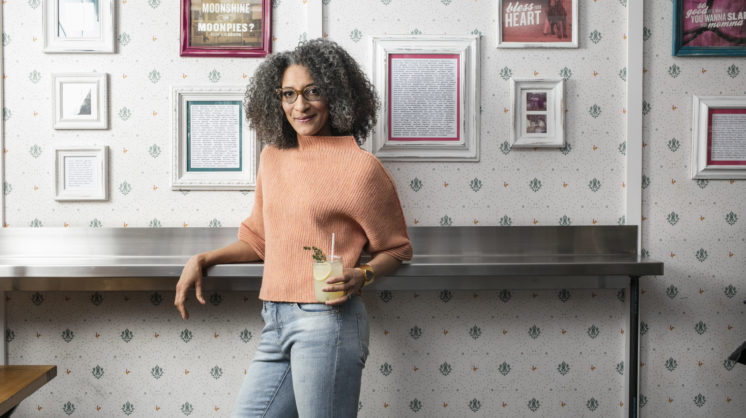 Chef Carla Hall is best known for her turn as a cohost on ABC’s “The Chew,” or as a contestant on Bravo’s “Top Chef” and “Top Chef: All Stars.” The television personality is only one small part of Hall’s resume, though. She is also a trained chef, cookbook author, former runway model, former culinary ambassador at the Smithsonian National Museum for African American History and Culture, and now, motivational speaker.

Hall was in Oklahoma City on February 6 as the featured speaker/chef for SSM Health’s annual Celebrity Chef event. She sat down with “405 Magazine” ahead of her presentation at the Chevy Bricktown Events Center to discuss soul food, culture, health, and cooking. 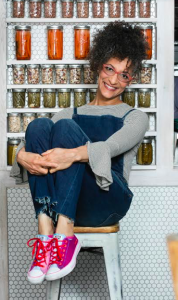 The event centers on heart healthy eating. Have you done that sort of cooking before?

I have, and it’s because when people think of soul food, they think of fried, smothered, and fat laden, and it is that, but those are the celebration dishes. I really make it a point to show the everyday dishes because every single cuisine, not just soul food, has its celebration dish side and its everyday side. With soul food, it kind of gets stuck in a particular place, and not because African Americans don’t put it there. I was talking to a woman today and she said “I guess if you’re eating healthy, you’re not eating soul food,” and my immediate response was, “No! I want to break you of thinking like that.”

I think it’s more vegetables. Southern food and soul food are agrarian cuisines. In the warmer climate of the South, we could grow all the time, and when you don’t have money, what do you do? You farm for yourself, and you’re eating lots of vegetables, and you’re having a little bit of meat. The wealthier a country gets, or even a family, they have those dishes that they could only have had once a month or twice a month before they had the money. After the wealth comes, they try to have them every day, but our bodies haven’t changed—only our pocketbooks. We should not be eating celebration foods every day, and I think we should be more mindful.

Speaking of being mindful of what we eat, have portion sizes changed as dramatically over the past few decades as it seems?

They have, but I think part of it is people wanting value for their dollar, but if you look at your health as a commodity, as something having value, then you should change the way you eat because this is the only body I’m going to get. I started thinking about this the older I got. When you’re young, it’s like you get a brand new car—there are no scratches on it, everything is running fine—but then the older that car gets, the more you have to do to keep it up. People say, “Oh, I could eat that when I was younger,” but actually I probably never could eat it, but I had a new body, so I could process it, but now I have to eat my hamburgers before two o’clock.

Full fat, so cheddar cheese, béchamel, pasta, butter—I’m not going to do low-fat anything, but I probably have mac and cheese four times a year.

How do you do healthy or vegetarian greens? They’re a huge part of soul food’s appeal, and they’re smoky, porky delicious.

I do my greens with smoked paprika instead of ham hocks and fat. When I had a restaurant in Brooklyn for a very short time, we served Nashville hot chicken because that’s where I’m from, and all the sides were vegetarian. I did that on purpose because I wanted people to know that you can have Southern food, and it can still be just as delicious and really fresh. One of the comments I got was that the greens were so light. You could actually taste the greens. I made the potlicker with smoked paprika, vinegar, some spice, onions and garlic. You just have to work harder when you’re cooking without meat to achieve depth of flavor.

Smoked paprika seems to be everywhere right now. Why is that?

If you look at the increase of vegetarians and vegans, I think there is a direct correlation. The smokiness and umami need to come from somewhere, and I think smoked paprika is a great fallback.

Anything else in the cabinet that needs to be there?

Cumin. I use it a lot. Also, being from the Southeast, it’s always a balance between acid and sweet, so I use a lot of vinegar. Cannot cook without it. Apple cider and white. I think if people know how to use acid and salt, and if they understand the depth of flavor and aren’t afraid of the brown because there’s flavor in the brown, then they immediately become better cooks.

None of that has to do with fat, but that being said, fat is a flavor carrier, so you absolutely need fat. It sits on your tongue so that the flavor attaches to your tongue. Otherwise, you just keep eating to satisfy that taste, so even in a vegetarian soup, if you don’t have enough olive oil, it’s not going to be satisfying. At home, I use olive oil, coconut oil, safflower oil, and I still use butter. I bake with butter and coconut oil. Sometimes I use lard. With the other things, though, I don’t need a lot of lard; it’s just a flavor thing.

Are you a vegetarian most of the time?

I’m a flexatarian. I really love vegetables. Sixty-five percent of my cookbook, “Carla Hall’s Soul Food,” is vegetables. You want the vegetables to sing. I love the farmer’s markets, because the farmers are bringing better produce in, and depending on the farmers, they can even teach you how to make them. We froze vegetables because we were living in the age of convenience, but there’s a movement away from that now.

Is soul food allowed to evolve? Will we see an expansion in the definition of what it is?

It is in other place. Out West, for sure. I just did a pop up with Chef Keith Corbin, and because there’s so many Chinese, Korean and Mexican people in L.A., his soul food is influenced by those cultures. He’s using turmeric and green chiles. This is how food happens. There is a natural evolution to the growth of food.