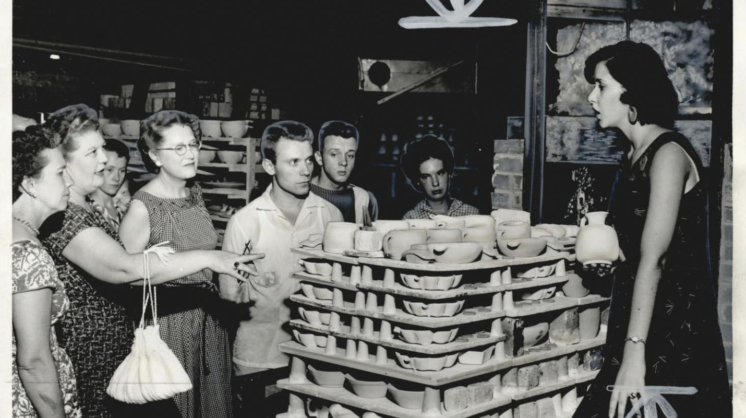 Long before The Pioneer Woman launched her line of cookware and Oklahoma City’s Chef John Bennett famously flew in Kaiser’s ice cream for the wedding of Julia Child’s niece, Frankoma pottery was in kitchens and on tables across America.

Best known for its dinnerware coated in prairie-colored glazes, Sapulpa-based Frankoma Pottery’s wares have become highly collectible in recent years, ranging in price from $5 for a popular mug to $10,000 for a rare, early piece. 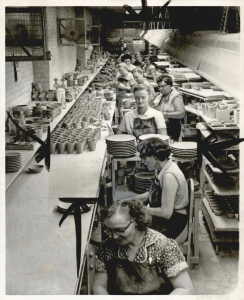 Frankoma was the brainchild of John Frank, a graduate of the Chicago School of Art, who was invited in 1927 to come to the University of Oklahoma and establish a ceramicsprogram. In 1933, he launched Frank Potteries, Oklahoma’s first commercial pottery enterprise, which he renamed Frankoma Pottery in 1934. In 1936, Frank left full-time teaching and devoted himself solely to the business.

With the help of local geologists, Frank found light clay suitable for his pottery near Ada.

Two years later, Frank moved to Sapulpa with his wife, Grace Lee, and daughters Donna and Joniece. They built a factory there on Route 66, but continued to transport clay from Ada.

Unfortunately, the business languished through the Depression years.

“Norman didn’t particularly want us,” Grace Lee Frank told the Tulsa World in 1983. “John was so in love with his work that he thought everybody was crazy for it. But they weren’t. His biggest ambition was to create beautiful things that the average person could afford.”

Eventually, demand for Frankoma pottery grew and began to flourish in the 1950s. Frank discovered another clay deposit near Sapulpa and began extracting it from Sugar Loaf Hill in 1954. Building on the success of his traditional pieces, Frank also began to utilize his marketing acumen and developed an entirely new line of commemorative pieces, which have also become sought-after collectibles.

A Piece of Oklahoma

Some collectors of Frankoma pottery are drawn to its southwest flavor. Colors such as Desert Gold, Redbud, Sky Blue and Prairie Green provide a palette inspired by regional landscapes. The colors are punctuated by molds created with Western motifs such as wagon wheels, buffalo and American Indian figures.

But for serious connoisseurs such as Jeanne Taylor of Vinita and Randy McFarlin of Ada, collecting is more a devotion to the soul of Frankoma.

“I live in Ada and have been going to the (Frankoma plant) since 1962,” said McFarlin, who is president of the Frankoma Family Collectors Association. “You put a piece of Frankoma pottery in your hand and it speaks to you. I understand that. It tells you a story.”

“I see it as celebrating my roots, literally – I mean, the fact that it’s made from Oklahoma clay. When I give it as a gift, I say very honestly, ‘Here’s a little piece of Oklahoma,’” she said. 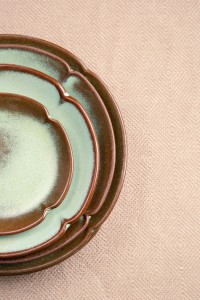 What to Look For

The value of a piece of Frankoma Pottery is determined by the mold, clay and glaze used. The rarer, the more expensive. Lighter clay extracted from the Ada location is more valuable than the darker Sapulpa clay because of

This photograph of Frankoma Pottery in Oklahoma City, circa 1965, shows a thriving enterprise.

I see it as celebrating my roots, literally – I mean, the fact that it’s made from Oklahoma clay. When I give it as a gift, I say very honestly, ‘Here’s a little piece of Oklahoma.’”

ABOVE: Visitors from three states give Joniece Frank, right, their attention during this 1956 tour, as she explains the processes by which pottery is made. RIGHT: Frankoma employees trim pottery in this 1956 photo.

THE HOUSE THAT FRANKOMA BUILT

John and Grace Lee Frank, in 1955, asked renowned architect Bruce Goff to design a home that would reflect their life’s work and the legacy of Frankoma Pottery.

Goff, then chairman of the School of Architecture at The University of Oklahoma, designed a house that spoke the Franks’ language of ceramic art and echoed the sweeping lines found in many of Frank’s art pieces.

Made of thousands of hand-glazed tiles and bricks – painted by the Franks themselves – each room features a remnant of Frankoma Pottery, organically balanced with natural materials and ornamental fixtures. The centerpiece is a tiled fireplace, constructed in a shape reminiscent of an ancient pottery kiln.

“They wanted their house to be ‘Frankoma,’” said Kandy Steeples, a longtime friend of the Frank family and current owner of the house. “Even the bricks that line the driveway, inside the kitchen, all around the oven – those are all glazed in Frankoma glazes. Every aspect of that house has Frankoma in it.”

The home also features a swimming pool and a ceramic studio where Steeples continues to produce Frankoma Pottery in small quantities.

Held in Frank family hands until the death of Joniece Frank in 2015 and Donna Frank in 2020, Steeples says it’s hard to separate the home from Frankoma and Frankoma from Oklahoma. Each has a piece in the other.

“It is part of Oklahoma. He (John Frank) was always involved in Oklahoma and promoting it, as well as Frankoma.”

The home is listed on the National Register of Historic Places.

In this 1956 photo, Lewis Side, right, is making a pot lid on the jigger wheel, which is a mechanical and electrical improvement on the old-fashioned pottery wheel.

its rarity. Glazes used only for a short time increase the value of a piece. The same goes for molds.

Building a Frankoma collection can range from affordable to pricey, with pieces that appeal to a variety of collectors.

“Most collectors have favorite glazes and finishes. And pay attention to the clay. Ada clay is a beautiful pale, beige or ecru clay. Sapulpa clay is much more traditional – a terra cotta clay, pinkish to dark red. You can turn a piece over and look at the bottom,” Taylor said. “They have this numbering system for their molds. Most have mold numbers that go into the 500s. This will tell you what Frankoma called the piece and will tell you the value of the piece.”

And collectors are as varied as the pieces they buy, McFarlin said.

“You have people who like certain vases, others who just collect the dishes. There are different pieces for different interests. There’s something for everybody,” he said. “We have people who come (to our annual meeting) from California, Nebraska, Florida – just about every state. Folks come from great distances. It’s retained its popularity.” 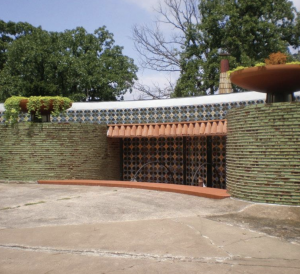 Frankoma in the 21st Century

Following John Frank’s death in 1973, his daughter Joniece took over operations until 1991. The business changed hands three times from the 1990s to the 2000s. Current owner Dennis Glascock bought the molds and trademark in 2012, but the Sapulpa factory was sold to another manufacturer.

Frankoma continues to produce pottery in small batches, but Glascock says he is planning to expand as early as next year.

“(In June) we started construction on a new building in Glenpool at 171st Street and Highway 75. So, in this building we’re going to have manufacturing, a retail store and an office with it. That’s kind of where we stand today,” he said. “The important thing I think with Frankoma is that it is kept in the state. I am now a Texas resident, but I do recognize how important Frankoma is in the state of Oklahoma. To me, Frankoma is a part, or at least recognized as a part of Oklahoma just as much as Will Rogers. You can’t separate those, in my mind.”