The Home of Compassion - 405 Magazine 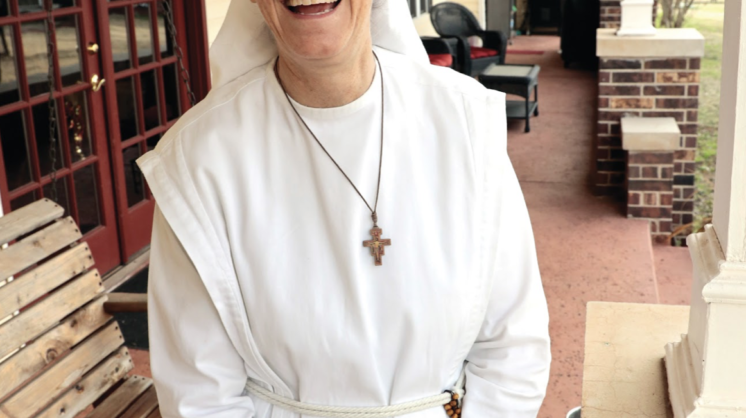 Stephen’s body and soul were worn out from years of drug abuse and life on the streets. His family relationships were fractured. He was 42, and death was imminent.

But on what was surely one of the luckiest days of his relatively short life, Stephen was placed in the care of Sister Maria Faulkner. And a hospital social worker was able to find Stephen’s 81-year-old adoptive father.

“His father came to his bedside and said, ‘Hello, son, it’s Dad. I love you,’” Faulkner says.

“He died free of pain, and clean, and he looked handsome.”

A few days later, there’s a fire burning in the great room of the spacious home in Moore known as the St. John Paul II Dwelling. It’s one of three homes for the elderly and terminally ill run by Faulkner’s Gospel of Life Association. Faulkner, 56, who wears a simple white habit and leather sandals, is quick to mention that the firewood was donated. 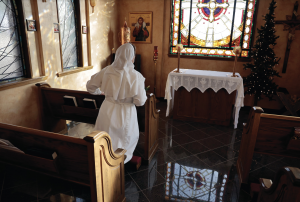 She has to remind herself not to be apologetic about the beauty of the house. She knows it was a gift from God.

After she toured it with the real estate agent, her conversation with her Creator went something like this:

“Lord, I want to live poorly and simply, and that house is too big and too nice, and I don’t want to have anything to do with it.”

And His reply, she said, was “You live poorly and simply, but it is not too nice for the dying you are to care for in My name and in the name of the Church.”

A donor purchased the home, and it was occupied on Oct. 16, 2018 – named for the pontiff who died in 2005 because “he lived his illness and old age in the world’s eyes. It touched the world the way he let people see him get old. Every life has worth until we are called home to God,” Faulkner says.

On that chilly day in January, residents were also missing Loraine, who died the same week as Stephen.

Vicki, who came from South Dakota to be near her son after she had a stroke, said Loraine was always looking out for her fellow residents.

“She never complained,” Vicki says. “She was a lovely person.”

Vicki attended Loraine’s funeral, as did the LifeGuards, which is the ministry’s title for the volunteer caretakers.

“I miss her,” Vicki says – but with a smile that never seems to leave her face. “I love it here. They are so good to me.”

Like many of the residents, Vicki has relatives who love her but can’t provide care, due to their own health problems or work schedules.

Lupita, 51, has ovarian cancer. Her daughter, a single mother with two jobs, took care of Lupita until she was no longer able to meet her needs, Faulkner said.

“I’m happy here,” Lupita says. “As soon as you walk in, you can feel God’s presence.” 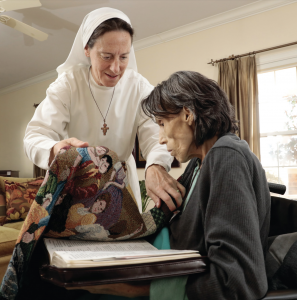 Faulkner is protective of the privacy of the residents and volunteers, and asked that they be identified only by first name. But she has nothing against publicity. In fact, the Moore house was added to the ministry after the real estate agent read a 2018 article about Faulkner. The agent thought the house was perfect, because it had been custom built by a couple who had five children and adopted 10 special needs children. It came with a stone chapel, a guest cottage and a barn that Faulkner converted into an events center. The owner donated the furnishings.

Faulkner was born in Oklahoma and grew up in Minnesota. After making her religious vows, getting hospice training in France and taking care of the elderly all over the world, she felt called in 2013 to return to her birthplace.

She joined St. James the Greater Catholic Church in Oklahoma City and started her ministry at a house across the street, working under the authority of the Most Reverend Paul S. Coakley, archbishop of the Roman Catholic Archdiocese of Oklahoma City. The St. James Dwelling has expanded to three adjacent houses. In addition to it and St. John Paul II in Moore, the third facility, called the St. Adelaide Dwelling, is in Grand Prairie, Texas. Faulkner works there one or two days a week, often taking the train.

Residents work together to get the food on the table and clean up afterward, said Max, a live-in LifeGuard.

Manuel, who is blind, came to the United States from Cuba as a teenager. Rosalio is a retired mechanic. Fermin started out as a volunteer and moved in after he developed health problems.

Annabelle was a cloistered nun for 25 years. She likes to help in the kitchen. Lucy, who moved in after she fell and broke her hip, enjoys the camaraderie at the house. She likes to play solitaire and gin rummy.

Faulkner said her vocation was revealed to her after college, as she was praying about which man to marry. There were two good candidates.

“And that’s when God stepped in and called me to give my life to Him. I’d known a lot of love in my life, and God called me to share that love.”

To donate or become a volunteer, go to gospeloflifedisciples.org.