The House That Wanderlust Built - 405 Magazine 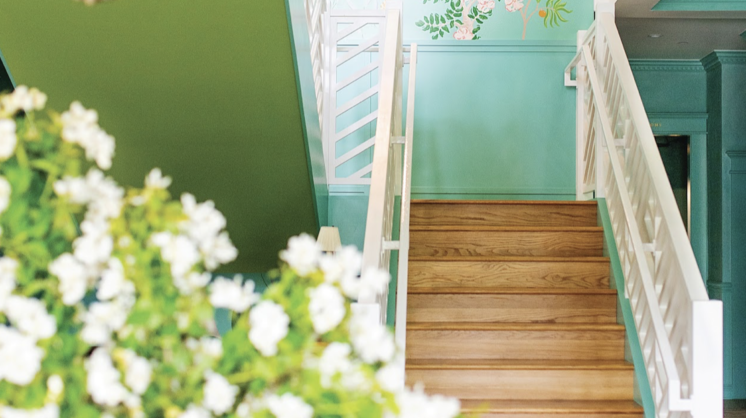 If the walls of the Bradford House could talk, their stories would entertain listeners for hours. Built in 1912 by the first Oklahoma County Clerk, William Bradford, the expansive home has hosted actor Rock Hudson and a campaigning President Jimmy Carter. Just beyond the wrap-around front porch, the Classen trolley once clamored up and down the road, connecting the fringes of Oklahoma City to Main Street downtown. And its location a century ago – surrounded by flat, not-yet-developed fields – offered an abundant horizon for new possibilities.

This history is why Sara Kate and Jason Little selected this building – a dilapidated, yet charming, luxury apartment located at NW 38th and Classen Boulevard – to create their boutique hotel. They were seeking a place with rich, built-in stories as a premise to author a new chapter.

“We wanted to make Bradford House a special getaway, and we’ve spent years curating and collecting to do that,” Sara Kate says.

“Internally, we created this story about the property: What if it had remained in the Bradford family?” Sara Kate says. “What if they were world travelers and got to go to all of these exciting places, and they chose to come back to Oklahoma City? Now they have this amazing collection that people get to enjoy.”

The Littles made two buying trips to Italy and France, scavenging fairs and markets and collaborating with kindred-spirit dealers to capture just the right mood. One favorite piece is a 19th-century Directoire-style daybed being repurposed as a sofa, reupholstered in bright lime green. Another favorite is the carefully procured collection of more than 20 café hoop chairs from the Paris flea market. Except for the café tables, all of the main house furniture, lighting and accents are European antiques – beloved discoveries from another era.

“Some pieces show some wear, and I find that charming,” Sara Kate says. “I’m drawn to pieces that have been lived with and loved, that now get to have new life. I also think traditional design can be playful and colorful. It doesn’t have to be beige.”

The hotel’s bold pinks, greens and blues were sourced from Papers and Paints, a company that specializes in restoration. The primary color, Scarab Blue, is the same color Papers and Paints created to restore an Egyptian mural from the turn of the century.

Sara Kate especially loves pink, evident throughout the Bradford House. The Lantern Room, adorned with 12 vintage Chinese mesh lanterns (in a nod to the nearby Asian District), is painted in Papers and Paints’ Manhattan, a saturated red with touch of pink.

“Pink has this whimsy and warmth, and it pairs well with everything,” she says.

Entering guests are greeted by a Maria Teresa chandelier and a Chinoiserie botanical mural, hand painted by British illustrator Louise Dean, depicting branches and birds sprawling up a grand, three-story staircase. Topping off the stairwell is a four-foot, custom-welded, Chinese linen lantern by Shades from the Midnight Sun in New York.

The combination of intense pigments, unusual accents and traditional style conjures images of an eccentric English manor. To achieve the right look, the couple had a checklist: velvet club chairs with bullion fringe, worn leather art deco chairs and beautiful brass that shows some age. However, that didn’t rule out the occasional odd purchase – hence the massive leather rhinoceros, circa 1960 by Omersa, now residing at the Bradford House.

Sara Kate has added her own collection to the mix, as well, in the form of black-and-white photos she bought at a local estate sale in college. The café walls are lined with more than 100 framed images of proud Oklahoma City residents, dating from 1910 to 1960.

“It’s really a mashup of wanderlust and a big love for Oklahoma City,” Sara Kate says.
In restoring the Bradford House, the Littles have both honored the past and reimagined the future. The collaboration with Gardner Studio architects and Lingo Construction called for complete rehabilitation of the 100-year-old home and new construction to provide more hotel rooms.

To preserve the integrity of the original structure, the Littles kept all exterior walls, exterior brick and interior framing intact, except the staircase, which had to be rebuilt to code. They transformed the house’s four large apartments – each with two bedrooms, one bathroom and grand living and dining spaces – into 12 private rooms on the second and third floors. The first floor became the common gathering space with a wrap-around porch, conversation seating areas, a cocktail bar and café.

“As custodians of the property, we are maintaining a story that has existed for the past 100 years, while giving the property new purpose and making our mark as part of the future story,” Jason says.

On the backside, they added a 24-room modern guesthouse with design inspired by the mid-century American architecture that the Littles discovered in Detroit, and furniture fabricated by Gardner Studio. Each room overlooks an open-air courtyard, landscaped by LAUD Studio with elements of English and Parisian gardens. The outdoor space connects the two buildings.

“We didn’t want to match the original building and do something that felt really faux,” Sara Kate says about the addition. “If the original house is the traditional ‘Bradford family’ home, then the guesthouse is a new generation, (and is) something a little different and more modern.”

Italian light fixtures, such as the Stilnovo chandelier adorning the bar and Venini Murano glass pendants dotting the café counter, “mix really well and marry the house with the back building,” says Sara Kate.

The four-year renovation process uncovered several surprises within the home that further shaped the Bradford House’s design. A sealed-off room in the basement was opened to reveal hat boxes full of letters, a wedding dress and a bust sculpted by a previous owner. The bust is now displayed in the drawing room. Wallpaper remnants found intact on the walls inspired the use of vintage wallpaper, sourced by Ketch Design Centre, in the bathrooms of the main house.
The Littles are still shaping their opening plans, as community health concerns and attitudes evolve regarding COVID-19. They aim to open this summer to guests only – with a public invitation at a later date. Look for updates on bradfordhouseokc.com.

“We love this house,” Sara Kate says. “It is designed to be an experience, and we hope that resonates with people.”