The Man With the Monumental Hands - 405 Magazine 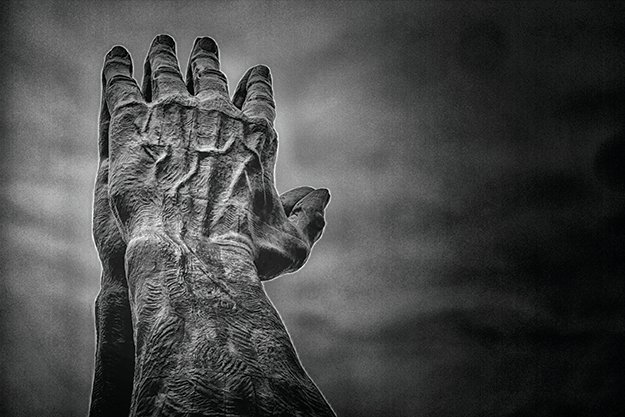 The Most Massive Depiction Of A Living Oklahoman Is Not The Statue Of Olympian Shannon Miller In Edmond Or The Johnny Bench Bronze Outside The Redhawks’ Ballpark In Oklahoma City. It is not Weatherford’s tribute to hometown astronaut Thomas P. Stafford or Norman’s quintet of Heisman winners, forever frozen in mid-play.

The statue was created in the flames of a Mexican foundry, transported to Tulsa in a long convoy of tractor-trailers. It weighs 30 tons, and stands as tall as the head of George Washington on Mount Rushmore.

The model for the work, unbeknownst even to many of his friends, may be the most famous Oklahoman you’ve never heard of: Gary Mitchell.

He was born May 19, 1952, in Oklahoma City, and grew up in the Venice neighborhood near N.W. 36th Street and May Avenue. He graduated from Northwest Classen High School and Oklahoma State, and attended grad school at the University of Oklahoma. By his mid-20s, he was a licensed clinical social worker, living in North Carolina and working at Duke University. Come the holidays, he would head west and return home to see family and friends.

His childhood friend Mike McMurry lived three blocks away. Home from Duke for Christmas, Mitchell dropped by and was welcomed by Mike’s father.

Leonard McMurry – then nearly 70 and hailed as “Oklahoma’s Michelangelo” – grabbed Mitchell’s hands to study them, front and back. He was thrilled. “These are perfect!”

McMurry was beginning work on a new sculpture commissioned by evangelist Oral Roberts for the planned City of Faith medical complex. It would be McMurry’s largest piece yet, 60 feet tall and 60,000 pounds. He sketched and photographed the hands of Gary Mitchell, explaining why they were exactly right: powerful and nicely veined, with long, tapered fingers that would seem the right proportions when viewed at a distance and from six stories below. Mitchell was happy to oblige. 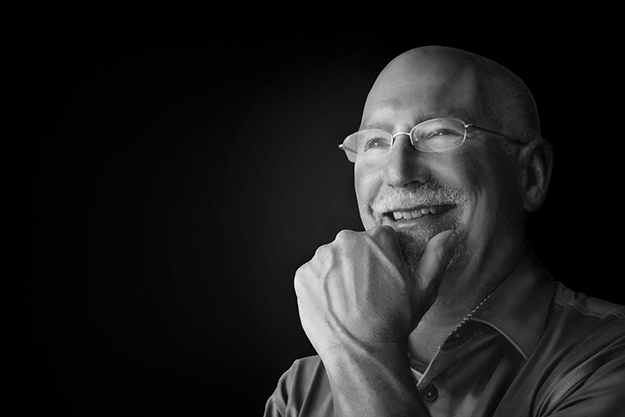 Though often referred to as the praying hands, Roberts christened the work “The Healing Hands.” His concept: depict two forces joining together: one hand to represent the healing power of medicine, the other to symbolize the power of faith.

A 10-man crew worked three months to assemble and weld the pieces in Tulsa. The massive palms are shown just making contact, the 20-foot-long fingers barely touching. Soon after their dedication, a reporter described the result: “So true to life are the hands showing lines, veins and muscles, that it wouldn’t be startling to see a pulse beating in the wrists.”

After nearly a decade installed as the symbol of the City of Faith, the sculpture’s future was in doubt when the hospital complex closed its doors in 1989. Two years later, Roberts announced that the hands would anchor the new entrance of his nearby school. He called them “the signature for our university and ministry, symbolizing the merging of our human efforts with those supernatural works of God.”

As the light shifts from dawn to dusk and back, the hands reflect the moods of the ever-changing Oklahoma sky, morphing from an orange glow to dull mustard to brown, sometimes with a coppery green patina at the welding seams. A parking lot to the right of the statue hosts a steady stream of vehicles: school buses, church vans, cars with new members of Oral Roberts University’s 50th entering freshman class and Route 66 road trippers posing for their been-there-done-that shot beneath the massive hands. 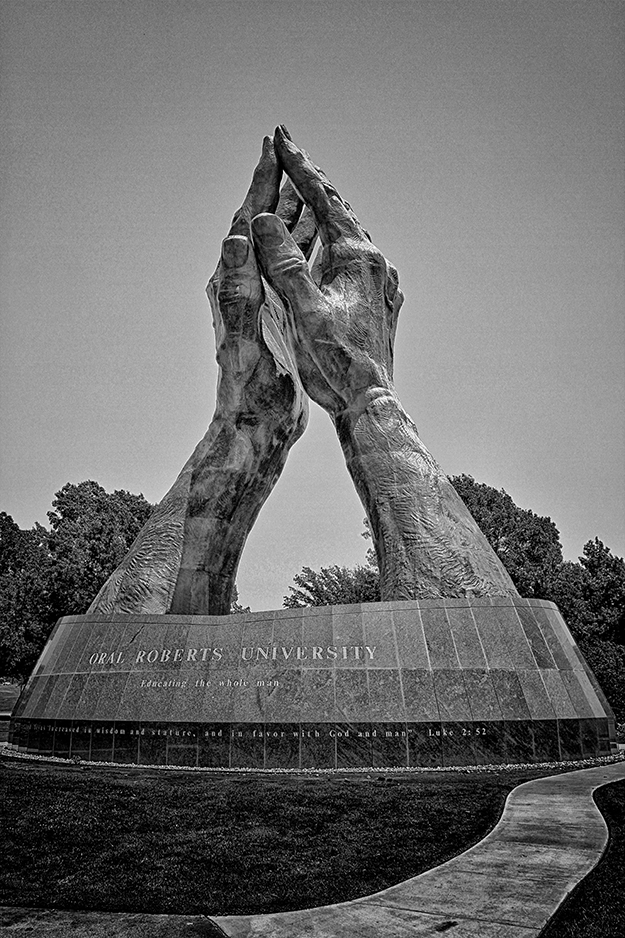 Mitchell is ambivalent about being memorialized in bronze for perpetuity. Raised Episcopalian, he is a modest and thoughtful man who considers himself more spiritual than religious, more progressive than conservative. Divorced once, and nearing retirement, he has moved to a tidy house on a golf course in Broken Arrow.

When I stopped by to chat, he was finishing lunch in the clubhouse with a longtime golfing buddy: Ralph Fagin, past interim president of Oral Roberts University.

Does Dr. Fagin know of his secret identity?

Gary Mitchell smiled. He lifted his hands, which still look remarkably similar to the 60-foot depiction.

What do you think?