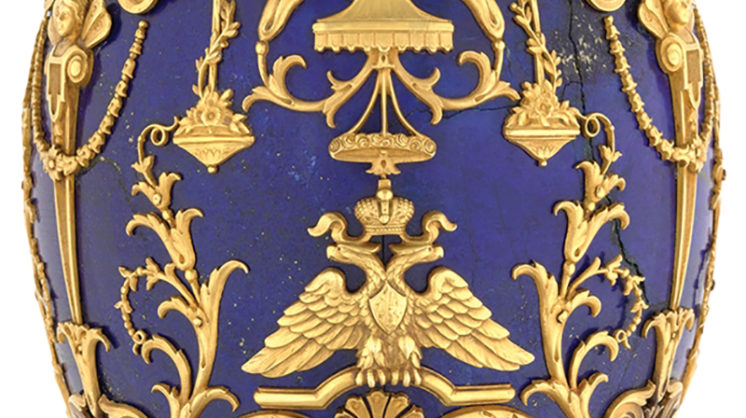 Think of Fabergé And Chances Are, You’ll Think Of Eggs.

And you will see eggs at the Oklahoma City Museum of Art’s exhibition “Fabergé: Jeweler to the Tsars,” which runs from June 20 through September 27. But, oh, there’s so much more.

Included in the collection of over 230 objects is jewelry, decorative items like the eggs or small animal figures, picture frames and more mundane items like cigarette cases or ashtrays. Each piece is unique with a tremendous range of materials and techniques required to produce it. By the peak period of the House of Fabergé, as many as 500 workers were employed and over 150,000 items were produced.

The jewelry company began in 1842 with Gustav Fabergé’s small jewelry store and workshop in St. Petersburg. However, it was his son Peter Karl Fabergé who grew the business into a legendary institution.

Karl Fabergé was well-traveled and well-trained. He became involved in restoration and research for the Hermitage, giving him ample opportunity to examine ancient treasures. In addition to having an artist’s eye, he was an astute businessman and demanded perfection for every creation that came from his atelier.

The initial impetus for success came in 1883 with the Pan-Russian Industrial Exhibition in Moscow. Tsarina Maria-Feodorovna purchased a pair of cufflinks for her husband, Tsar Alexander III. By 1884, the House of Fabergé was awarded an Imperial Warrant, allowing them to use the imperial emblem on their pieces.

Increasing involvement with the royal family brought prestige and more business to the firm, while royal orders for elaborate items gave them opportunities to create some of the world’s most beautiful objects. The sky was literally the limit until the advent of World War I. Then the company was co-opted and turned to producing hand grenades and other items for conflict. With the Russian Revolution in 1917 and the execution of the royal family, the collapse of the House of Fabergé was complete and Karl fled to Switzerland where he died in 1920. It is said that he died of a broken heart.

The crown jewels of the many crown jewels in the exhibition are four of the Imperial Easter eggs. The displays are divided into four sections with one egg in each area. The first section, whose centerpiece is the 1897 Imperial Pelican Easter Egg, introduces guests to the legacy of the Byzantine Empire and ancient traditions. This egg, given by Emperor Nicholas II (the titles “tsar” and “emperor” were used interchangeably) to his mother, the Dowager Empress Maria Feodorovna, honors her charitable work.

It is topped with a figure of a pelican on a nest of hatchlings. The Empress embraced the pelican as representative of maternal care and Christ’s sacrificial love. Inside the red-gold egg are tiny paintings framed in pearls. The egg tradition, with pre-Christian roots, became an important symbol in Eastern Orthodox Christianity. The Romanovs just kicked it up a notch.

The egg in the second section is the 1903 Imperial Peter the Great Easter Egg commemorating the 200th anniversary of the founding of St. Petersburg. A gift to Empress Alexandra from her husband Emperor Nicholas II, this egg is made of red, green and yellow gold with diamonds and rubies. Four miniature watercolors protected by rock crystal decorate the outside of the egg. Inside is a gilt bronze replica of a statue of Peter the Great. The egg itself is 4.25 inches tall. The theme of this section is Russian history and identity.

The lapis lazuli and gold Tsesarevich egg with its two-sided portrait of the royal heir, Alexei, anchors exhibits dealing with the House of Fabergé. The museum built unique, curvilinear tables for the exhibit, homage to the tables used to display pieces in the Fabergé showroom. This area illustrates the diversity of materials used and variety of items created.

The egg in the final area, the Imperial Red Cross Easter Egg, is much more simplistic in design. The Russians were embroiled in World War I and ostentation was unacceptable. A gift from Nicholas II to his mother, it is made of silver, gold, mother-of-pearl, ivory and enamels. Inside are little portraits of his wife and four female relatives wearing nurses’ attire.

The final days of both the House of Fabergé and the 300-year reign of the Romanovs end the exhibition and the story. Karl Fabergé escaped from Russia; the Tsar was forced to abdicate and the family was arrested. One of the most poignant items in the collection is a small star-shaped picture frame. It is believed that this is the only one of their treasures that the royal family still possessed at the time of their execution in Siberia.

After the Russian Revolution, the Soviet government began selling off items they had confiscated from royalty, the upper class and the church. Early American collectors included cereal heiress Marjorie Merriweather Post; Armand Hammer, president of Occidental Petroleum and friend of Lenin; and Lillian Thomas Pratt, whose husband was a General Motors executive.

Mrs. Pratt acquired a major collection of Russian art which included a number of Fabergé pieces. She owned five of the Imperial Easter eggs, the four on display here plus a fifth which is too delicate to travel. Her tastes were eclectic, ranging from the elegant eggs to picture frames and parasol handles. The bulk of this exhibition comes from the Pratt Collection which she bequeathed to the Virginia Museum of Fine Arts in Richmond.

Oklahoma City is the last of five American cities to host this exhibition. From here, the collection will go to China. This is a special opportunity to glimpse a world gone by — and to see creations of such exquisite artistry.