It’s the stuff dreams are made of. Two young people meet in high school (in Norman), but sparks don’t fly. That is, until they meet again, this time as upperclassmen in college. She studied advertising; he was a political science major. That fateful re-meeting was both the continuation, and a new beginning, of the story. The two soon married. So goes the saga of Taylor and Koby Orndorff, whose lives have rolled merrily along as husband and wife.

They bought a beautiful little Nichols Hills starter home on Marlboro Lane, which was the perfect cozy size for a pair of lovebirds. The couple decorated that home themselves, in a quaint, casual first-home style, which means almost (but not quite) grown up in motif. It was comfortable and pretty, and suited them just fine.

Then the birds and the bees did what birds and bees do, and the next thing they knew, there were two babies in the baby carriage. “We needed a bigger house,’’ Taylor says. “When we moved, onto Marlboro, it was just the two of us. And we didn’t have nearly as much taxidermy at that point.” Koby, a big-game hunter, travels the world and has brought home trophies of every description: a zebra, deer large and small, bears, cats and more, which are now ensconced in the couple’s new home. 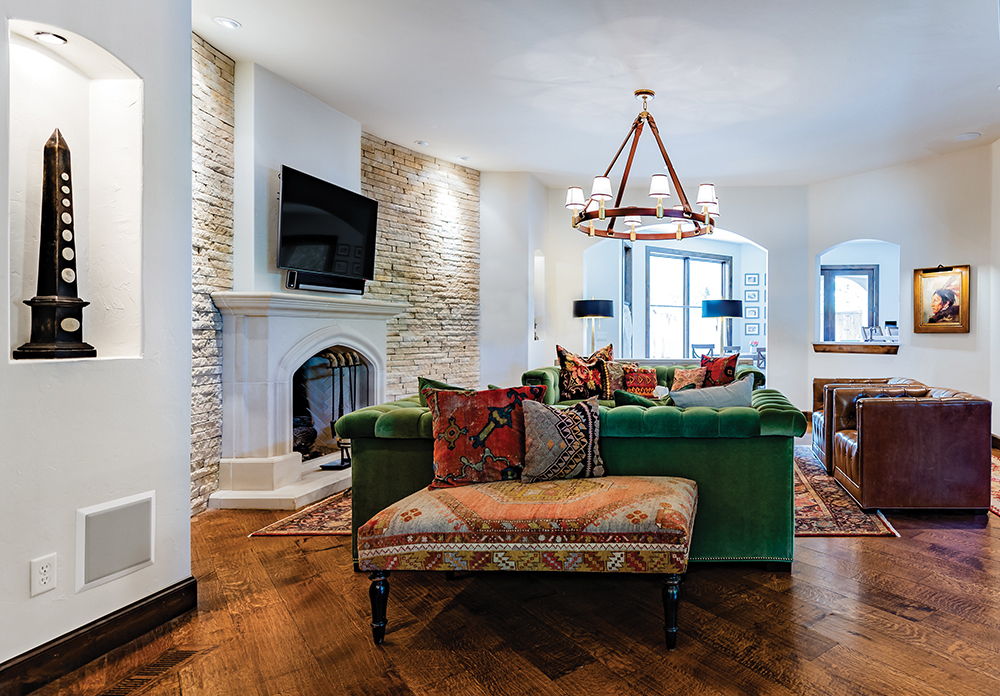 Taylor and Koby, along with sons Knox (2) and Nash (6 months), needed new digs and they needed them badly. “Our new house has much more room,” she says. “We’ve got more than double the space, which we love.” Another selling point: their Marlboro home had been built in 1958; the new one was constructed in 2009, meaning it only needed a dash and a dollop of updating.

But it was still a complicated undertaking. Creating a space that was at once cohesive, beautiful and family-friendly while still elegant was no small feat. Fortunately, Taylor knew exactly who to call. “I knew pretty quickly that I couldn’t do it by myself,” she says. She’d become friendly with Cody Thomson, of Thomson+Thomson Interior Design, in a fitness class the two frequented, and the minute the ink dried on the contract, the creative work began.

“We did the whole first floor,” Orndorff says. The home’s style is a little bit Hollywood Hills, with some tribal influences, a nod to Koby’s trips to Africa. The couple had honeymooned in Montana, and Orndorff had also wanted to imbue the space with a cozy, lodge-y vibe. It’s where happily ever after is still happening.