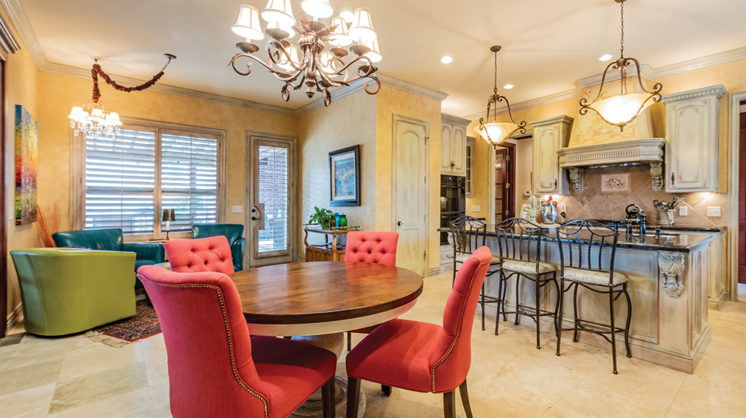 When Lisa and Dick Pryor bought their north Norman home five years ago, they needed a property with a flexible floorplan, able to accommodate up to three generations of their family – including six children, nine grandchildren and Dick’s late mother Nell. They would rarely be in residence all at once, but at holidays, the Pryor house is filled to the brim, and at any other time of year, children and grandchildren are in and out, ebbing and flowing with various celebrations and birthdays.

Theirs is a blended family, the result of a romance that began the moment Dick laid eyes on Lisa when they were underclassmen at the University of Oklahoma in the mid-1970s and came full circle some 20 years later when the pair reconnected. Dick keeps a photo of Lisa from college on a shelf in his office, and it’s clear that the couple was meant to be together. Both are political junkies, whose lives could easily be the fodder for an Oklahoma adaptation of “The West Wing.” 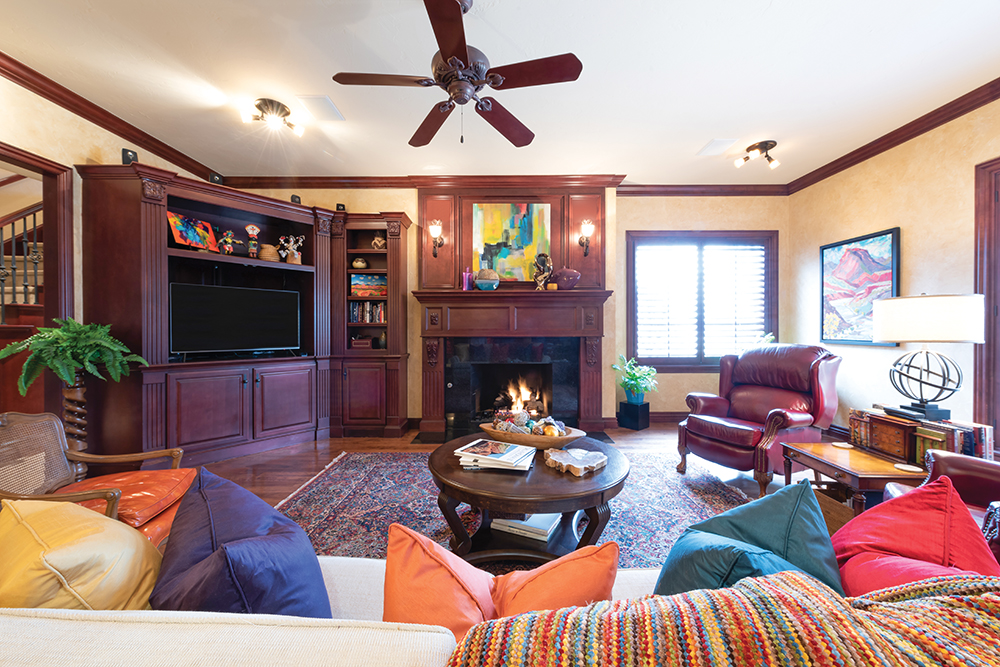 Many will recognize Dick from his decades in broadcasting on the radio and television in north Texas, Tulsa and Oklahoma City. He was the anchor of OETA’s news report for 25 years. These days, he’s the general manager at KGOU, the University of Oklahoma’s public radio station – a position he’s held for a couple of years now, and one which brings his career full circle.

“My very first gig on the radio was at KGOU in 1974,” he says. “It was September, and a friend of mine and I had heard that KGOU would let students on the air. We went in and watched some guys do a scoreboard show, and the producer said, ‘Can you guys do that?’ Of course we said, ‘Sure,’ and he said, ‘Great, you can do it next week.’”

The trouble was that Pryor had never done a radio show, but he had an ace in the hole. “As a kid, I would listen to baseball games on the radio when I was supposed to be asleep, for hours and hours,” he says, and that early immersion in sportscasting enabled him to launch his career. “Those listening skills have also served him well as a spouse,” Lisa says, laughing. 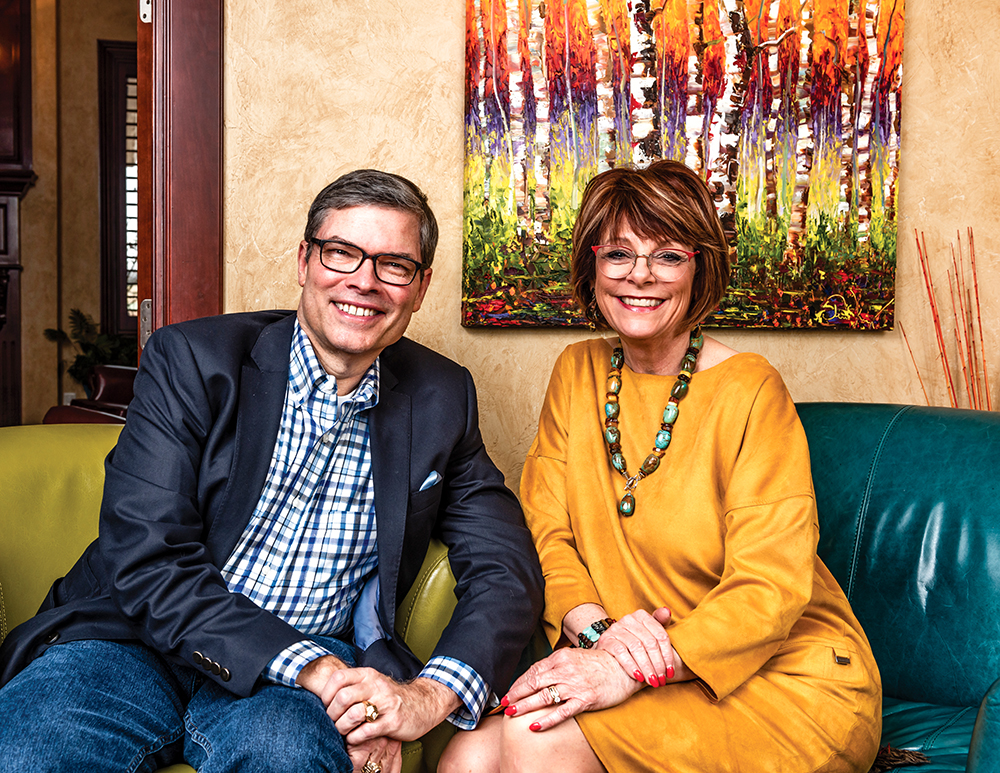 He soon scored airtime on KNOR radio, one of the stations he surreptitiously listened to as a kid, and on KAFG, which is now KJYO, doing play-by-play for El Reno’s high school basketball teams. “I was a full-time student at OU, and was working for three radio stations at the same time,” he says.  The kid had gumption.

From there, a slew of TV and radio jobs ensued, which have garnered him three Emmys. He also found time to attend law school, and opened a practice with a fellow lawyer and childhood friend for a few years before returning to television.

“In 2016, I was asked to begin teaching at OU’s journalism school,” he says. “I taught mass communications law as an adjunct, and while I was doing that, the opportunity to take on the position of general manager of KGOU came along … and here I am. I love it.”

Lisa’s career has also come full circle, and like Dick, she’s come back to OU, happily.  “I met Dick when we were both freshmen at OU; he was already working at KGOU and I was a work-study student at the Oklahoma Center for Continuing Education,” she says. After a few dates, she and Dick went their separate ways. 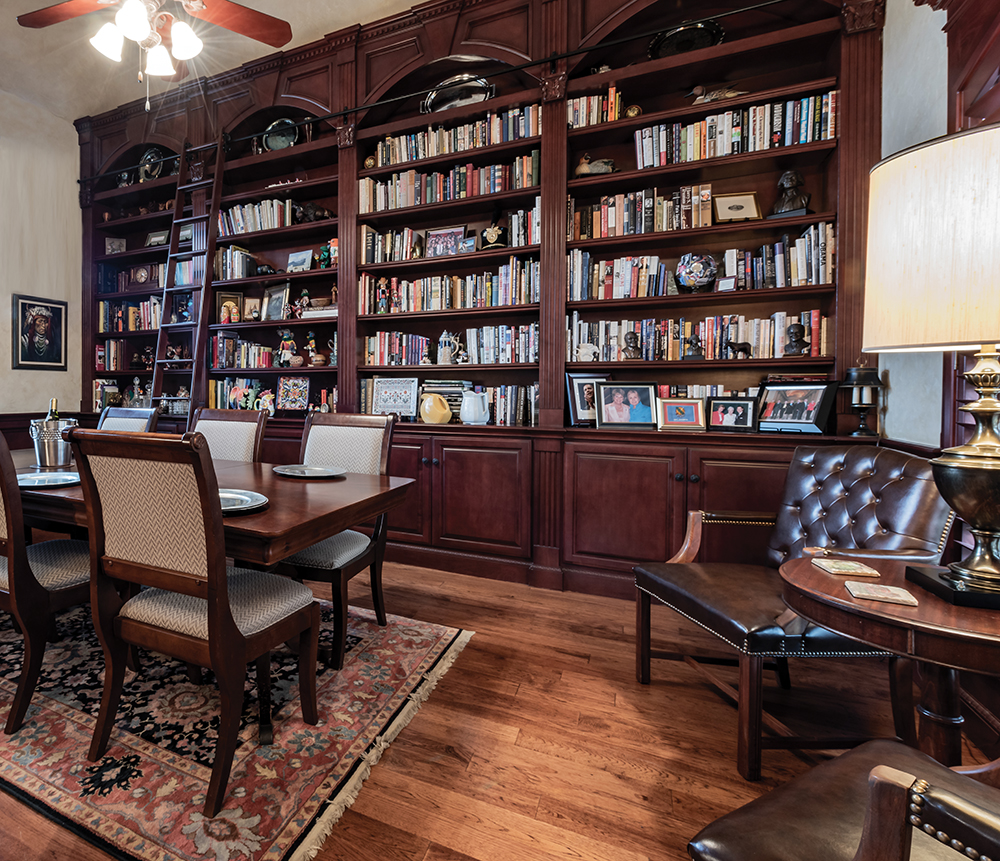 Fast forward to 1994, when Lisa returned to Norman to teach at Central Mid-High, then Alcott Middle School, where she created an award-winning service-learning program. “I got into teaching late. I was 37 when I entered the classroom and once I did, it just felt natural, because it was an information transfer. After I left the classroom, I worked at the Oklahoma State Department of Education in service-learning and later as Assistant State Superintendent.”

About the same time, she became avidly involved in politics and was asked to run for the State Senate. Although she lost that race, it was an experience she turned into a winning campaign for a two-year term as Chairman of the Oklahoma Democratic Party (ODP). “During my term at the ODP, Democrats were elected to eight out of nine statewide offices,” she says.

Turns out Dick is not the only journalist in the family. Lisa did a stint as editor of the Hobart Democrat Chief before focusing her career on education. “My passion is information,” she says. “I love to connect people, to write, tell stories and to transfer knowledge. I am a connector of facts and figures, and audiences.”

She spent five and a half years hop-scotching across the country for the National Center on Time and Learning, which she found exhilarating but ultimately exhausting. Her current position, serving as the director for program development and innovation for the vice president of outreach at OU, allows her to do what she loves: research and information share. 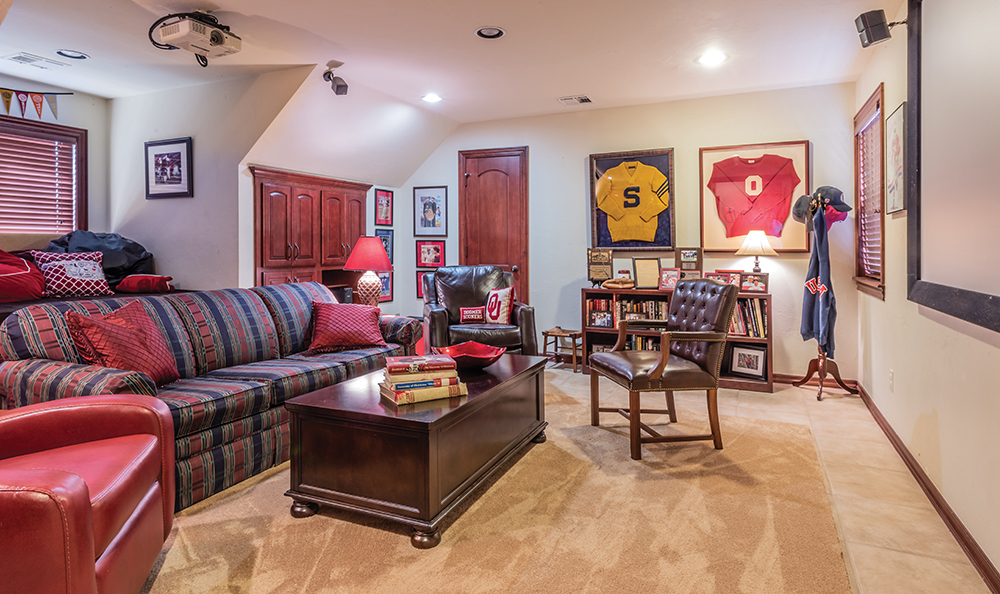 They’re a bit of a power couple, avid travelers, art collectors and the gracious hosts of several annual gatherings for dozens of friends.

“Dick has fostered and encouraged my love of color,” Lisa says. “When he and I married, our love of collecting art just started. Some of our collection is local, some is from New Mexico, and much of it is about color. The older I get, the more color I want in my life.”