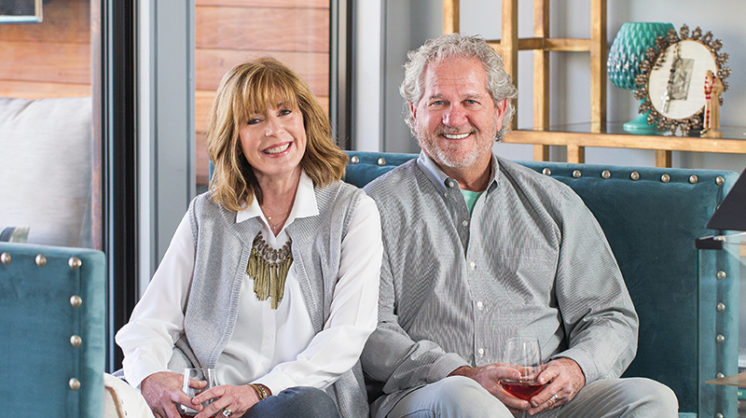 Trish Randolph first laid eyes on her husband Gary 33 years ago, in Weatherford, America. She was working as a clerk in a clothing store, and he was in the early stages of his construction career, remodeling a section of the store.  She’s from Hammon, and he hails from Boise City.

“On our first date, we came to Oklahoma City and went to the White House restaurant, on Grand,” Gary remembers. Trish is all smiles as the pair reminisces about their courtship. “I sure thought he was cute,” she adds. A year later they were married, blending their families, and after a couple more years they moved to Edmond. Today, they have four children and 10 grandchildren. Almost. The tenth is due in October.

Gary is a master builder, having plied his trade for 44 years, and his successful company bears his name. “Master builders have been around for 5,000 years,” Gary says. “I see the house long before it’s built.” Being a master builder means you take a project from design to completion. You don’t hand a project off to someone else, so there’s no room for misinterpretation of plans or the vision. 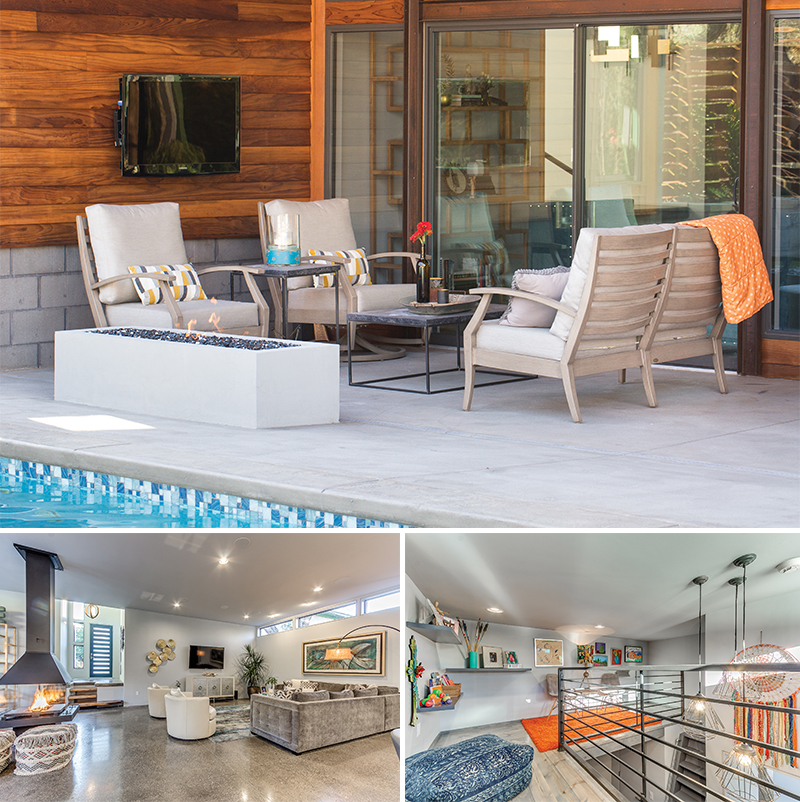 •With 10 grandchildren popping in and out of the Randolphs’ home, making one room an incredibly cool kids’ hangout was a stroke of genius. This loft and reading nook occupies about a third of the overhead real estate, and if you’re more than about four feet tall, it’s not for you.

• Shiny concrete floors embedded with pea gravel serve as primary flooring throughout the home. Polished to a high sheen and used in an artful way, simple materials become elegant, and could almost be mistaken for terrazzo. The painting above the cushy, kid-friendly sectional was created by an African artist living in Santa Fe, who goes by one name, Boubak, and paints his unstretched canvases on the ground.

Gary Randolph is an artist and he thinks in three-dimensional imagery, able to create a home or room in his mind, and then execute it perfectly.

Daughter Ashley is the only one of the Randolph progeny to follow her father into the business and is now an apprentice.

Trish, an aesthetician, owns her own business, too, and tackles high-level design projects for her husband’s company. But to say he’s got one company and she’s got another isn’t really the way it works. They collaborate on everything, including one another’s sentences, and Gary lets Trish the aesthetician experiment on him.

The couple has imagined, constructed and now makes their home in a beautiful Mid-Century Modern-inspired home on a lot that they lucked into finding – and quickly snapping up. It’s in the heart of Oklahoma City, in a neighborhood that dates back to the 1940s. The property runs along the Deep Fork River, and the couple reports that they share their early mornings and evenings with deer, fox and raccoons. “We wanted a more urban lifestyle, which we got, but we also got a little piece of wilderness right in the middle of the city,” Gary says. 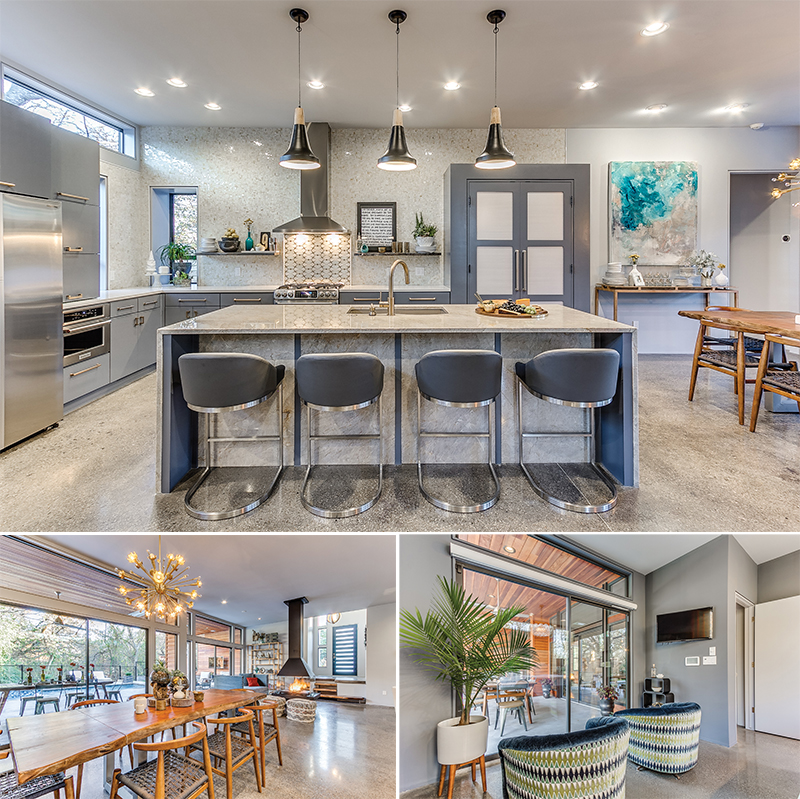 Clockwise from top: Trish is an avid cook and this kitchen is a beautiful blend of form and function. A hidden coffee bar is tucked into a cabinet adjacent to the refrigerator. Three enormous slabs of quartzite, which is pressure-treated quartz sandstone, have been seamlessly assembled into a huge kitchen island with lots of space for meal prep or lingering.

•  This simple room is filled with Trish’s signature mix of textures and her clever high-low blend of designer pieces and vintage shop finds.

• A Jonathan Adler Sputnik chandelier illuminates an organically shaped and naturally finished dining table big enough for a crowd. The steps leading down to the living area mimic the table, and were created out of walnut by Todd Graham and his company, Tree Theory. The Randolphs became interested in Mid-Century design several years ago and immediately became students of the genre, even subscribing to its de facto bible, Dwell magazine.

“One night we were home, watching a Thunder game on TV,” Trish says. “Well, I was watching it, and Gary was asleep. And I was looking online for lots, which I had been doing for quite a while.” The couple had downsized once, significantly, moving from a 2,800-square-foot Edmond home to a mere 1,200 square feet in Oklahoma City’s charming gem of a neighborhood, Brookhaven. “We knew we were thinking we wanted about 1,800 square feet and the lots were just too big. And then this popped up. I woke Gary up, and we got in the car in our pajamas and drove over.  We bought it the next day.” 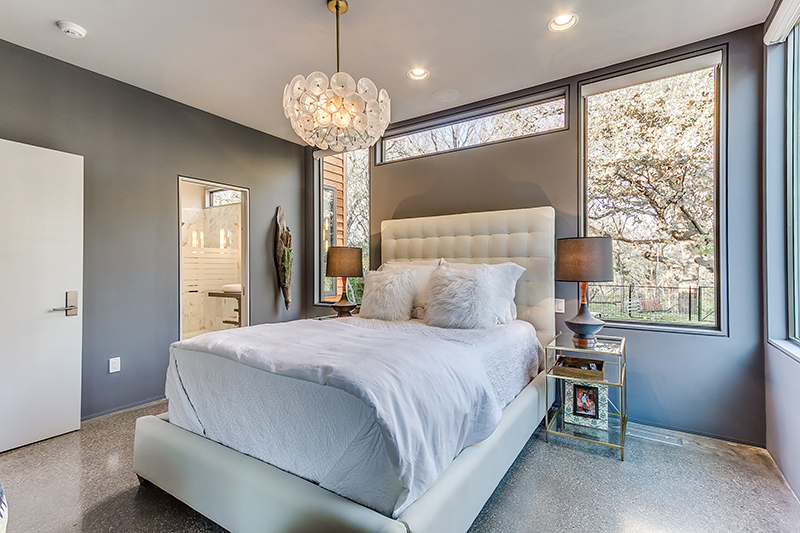 Above: Gary and Trish’s master bedroom is a far cry from the massive master suites popularized in the early 2000s. Everything about this home is modern, and that includes its attitude. Less really is more, when it’s perfect.