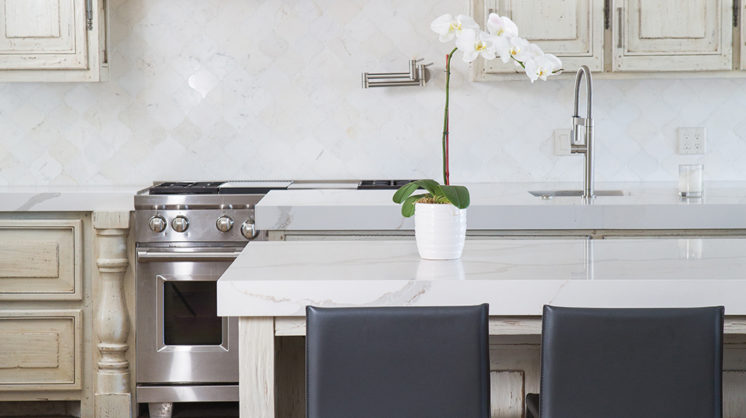 Sheli Reynolds, her fiancé Phil and their three daughters, Julia, Liv and Emma, live in a beautifully remodeled home on Camden Way, a cheerful street in the tiny, tony burg of Nichols Hills. This is a story of precision, pizza, creativity, entrepreneurship, a dash of reality TV and two slightly Machiavellian 13-year-old besties … without whom there would be no story at all.

Julia and Liv are BFFs. They met at Westminster School, and played volleyball together. The pair was inseparable, often sleeping over at each other’s houses, and in constant communication in that full-throttle way to which teenage girls are prone. They were as close as sisters, but could they actually become sisters?

The girls hatched a plan to bring their parents, both unattached, together as often as possible – to see whether sparks would fly. Conversations lingered during picking up and dropping off, and lo and behold, the girls were right! “Between the volleyball and sleepovers, Phil and I got to know each other,” Reynolds says, smiling. “We got engaged last year.”

It’s been a whirlwind of a year for Reynolds. Engagement, combining families and renovating and moving into a new home would be enough for most people, but most people don’t have Sheli Reynolds’ energy level.

She and her sisters, Traci and Tami, decided to open a restaurant, too – an organic pizza joint called Stone Sisters Pizza Bar, located in the old Borden’s ice cream shop at Broadway and NW 21. Reynolds explains, “Years ago, after my husband passed away, I began to seriously learn about health and nutrition. My sisters and I started a healthy living business, cooking and shopping for people who wanted better health. We had a party for our clients, and I made pizza.” And so it began.

People told the sisters they needed to market their pizzas. Reynolds created the crusts, and Tami made the sauce. “At first we sold dough balls, but nobody wanted to roll out their own dough,” she says. Around the same time, a friend of a friend had purchased a full complement of pizza equipment, and the women were asked if they’d ever thought about opening a pizza place. “I said no way,” Reynolds laughs.

But the universe has a way of making things happen. The stars (and logistics) aligned, and the sisters said yes. Chef Cally Johnson, of Big Truck Tacos, Boulevard Steakhouse and more, has come on board to develop the menu, and each of the sisters will be in charge of her own piece of the pie, so to speak: Sheli is the president, Traci is business manager and Tami, an organic chef, will fill up the eatery’s to-go case with soups, salads and pizzas. 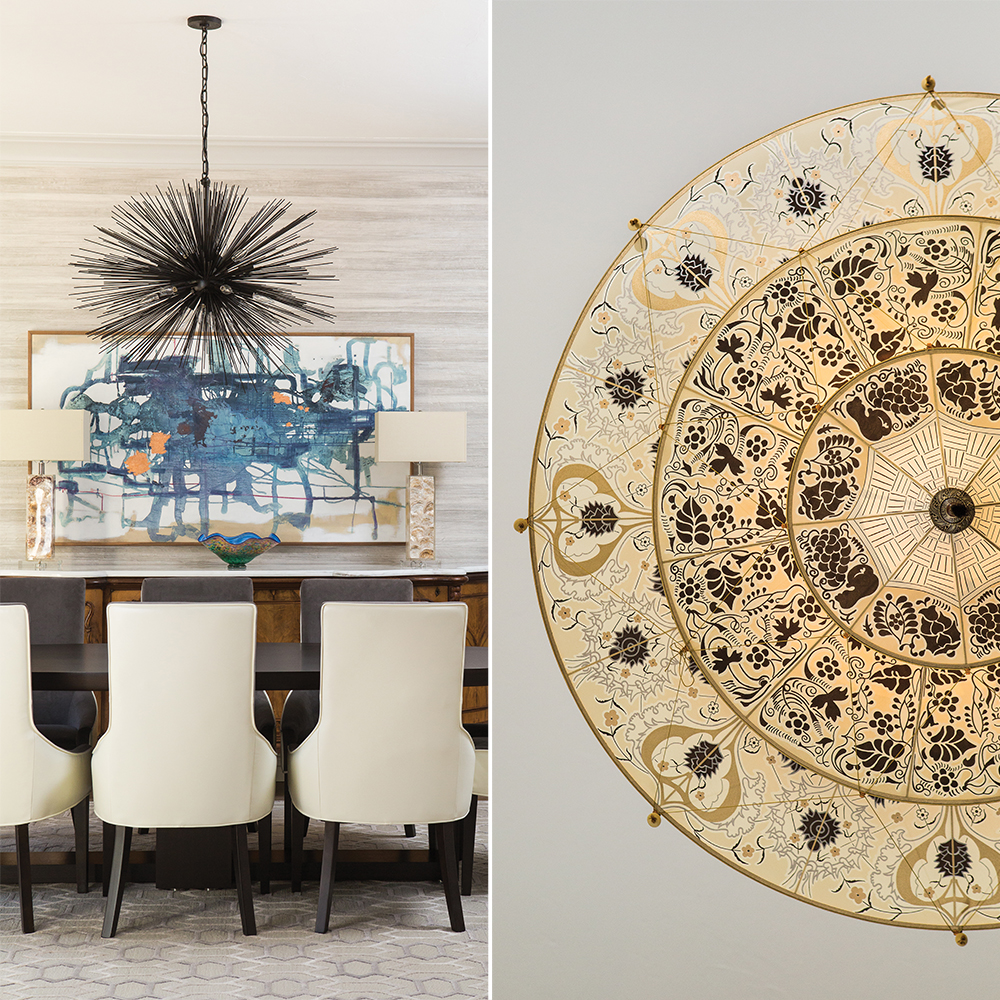 • In the family’s large dining room, wallpaper from Elitis lends neutral texture to the room. Underfoot, a wool-and-silk rug warms the floor and anchors the custom table and chairs. The chandelier, another incredible piece, is the Strada by Kelly Wearstler. Art from the couple’s own collection finishes the effect.

• In the entryway, a Fortuny chandelier welcomes guests from on high. It is hand-painted silk, from the Venetian design powerhouse that was founded in 1906. Fortuny was originally a fashion house, known for its beautiful draping and intricate pleats. This is one of Phil’s favorite pieces.

But back to the home. Reynolds and her blended brood found their Camden Way home and immediately brought longtime friend and talented interior designer Jennifer Welch to the property. (By the way, Welch, her ex-husband and two best friends star in the Bravo reality show “Sweet Home Oklahoma.”)

Welch served as the contractor for the endeavor, and when Reynolds told her about their ambitious, mandatory timeline, Welch pushed pause on other projects and made it happen. “I knew the home had great bones,” Welch says. “But it was dark, and needed a serious update to work for Sheli. We opened up the kitchen and created a vibrant, happy home, which suits her perfectly. And we did it in 60 days from start to finish.” 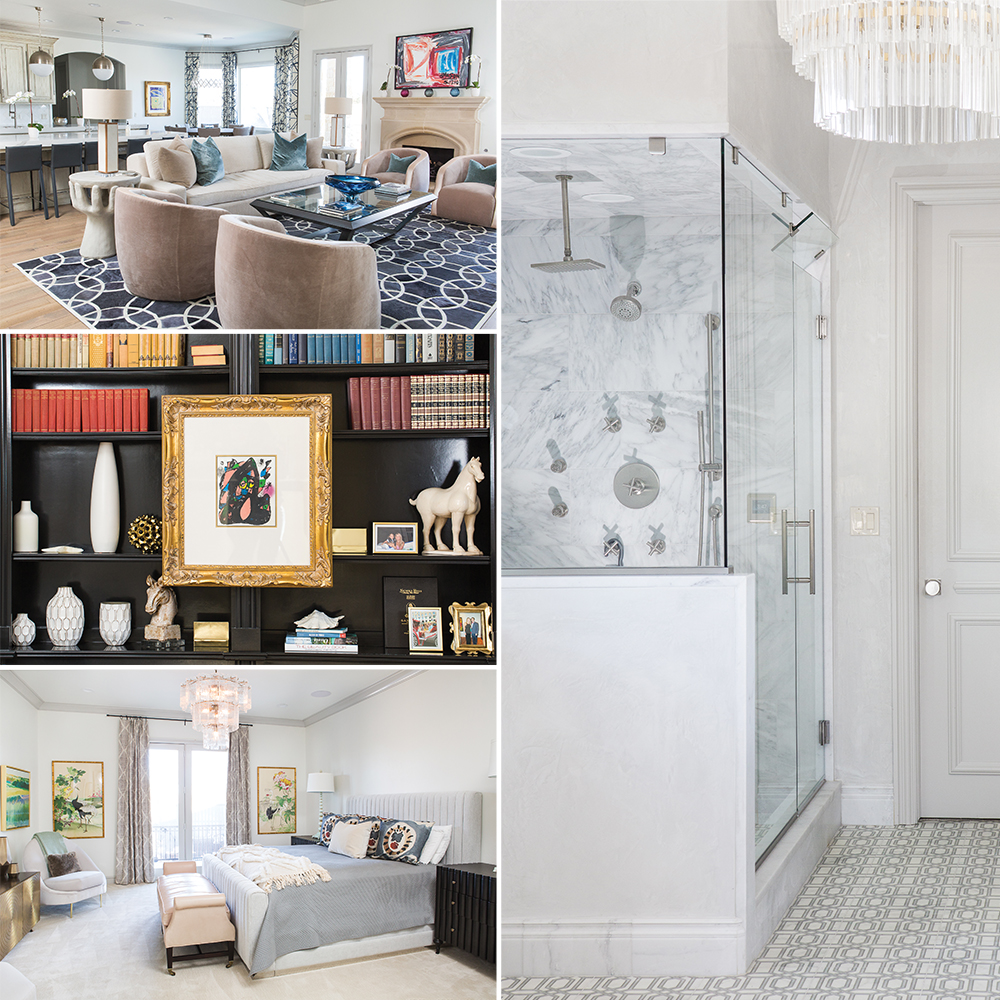 • In the spacious living/family room, which opens into the kitchen, a vividly patterned custom cowhide rug by Kyle Bunting defines the space. Four beautiful Verellen swivel chairs flank a custom sofa of Welch’s design. A bold painting by former NBA star Desmond Mason hangs above the mantel, and a whimsical chandelier by Oly works perfectly with the scale and sensibility of the room.

• The master bath was gutted, and the incredible, screen-printed marble tile by Stone Impressions (inset)  became the star of the show. A vintage-Hollywood chandelier, grayish white Venetian plaster walls and a new steam shower complete the feeling that you have entered an oasis. “The floor is the focus,” Welch says. “Everything around them is quiet.”

•“We wanted a slightly vintage, old Hollywood feeling in the master bedroom,” Welch says. She almost always places benches at the end of beds, for practical and aesthetic reasons.

“They look good and they are functional. You need a place to sit down and tie your shoes, or to put the bed pillows on at night.” This one is upholstered in a soft, blush-colored leather, while Italian fabric curtains by Donghia and a vintage-inspired bed add serene impact.

• The transformation was perhaps the most dramatic in the study, which became a room to gravitate toward after its renovation. Black lacquered cabinetry is filled with antique books and interesting bric-a-brac, harmonizing with a lithograph by Pablo Picasso.