The Search for Karma, Oklahoma - 405 Magazine 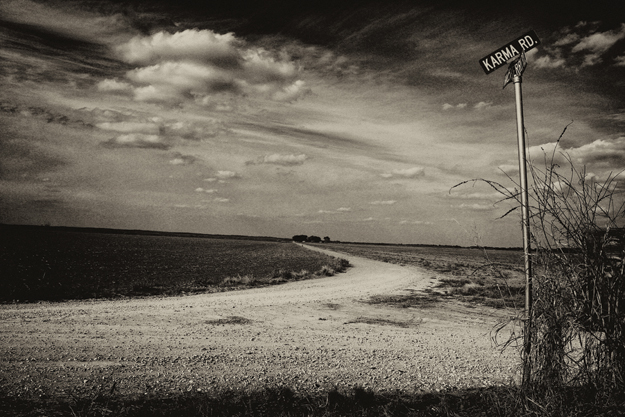 For years I’d looked at the dot on the map and figured it was a magical place, a hidden treasure waiting to be discovered. It sat modestly in the far southern border of the state, past Durant. It had a good vibe. How could it not?
It was Karma. Karma, Oklahoma. And it was calling my name.

Finally finding a day free, I decided to answer. Headed south, I drove by way of Centrahoma and Coalgate and Grant, stopping at promising locales along the way: True Value Hardware in Stonewall, the busiest store in town, frequented by men with pickups loaded with mysterious rusting equipment and NOBAMA stickers. The Double Vision Liquor Store (and taxidermy display) in Lehigh, complete with tall glass bottles in the shape of Uzis filled with wicked red liquor. A detour to the famous Showman’s Rest section (with headstones like “Elephant Boss Man,” “Queen of the Trick Riders” and “The Amazing Humberto!”) of the Mt. Olivet Cemetery in Hugo.

But Karma beckoned. It looked to be a mile or two north of the Red River. I peered at the map now and then as I zig-zagged my way closer and closer, until I found myself over the bridge and into Texas.

Wait – what happened to Karma?

I doubled back and wheeled into the Red River Kwik Stop, the drive-through-window-only liquor store on the Oklahoma side. I walked up to the window to ask the 60-something couple who ran it where Karma was.

The woman smiled. “Karma’s a road, and a dirt one at that.”

The man looked puzzled. “Is that where Jackie lives?”

The woman nodded. “Who do you want to see?”

I wanted to see Karma, the town. I took out the map and pointed, helpfully.

“There’s no Karma here. Just a road. Go north about a mile, and it’s the next dirt road on the right.”

So I did. If a sign had once been there, it was no longer. I took the turn and drove a couple of miles, past two farms on the right and one on the left.

Bumping along, I spotted a road sign silhouetted against a patch of bright blue sky. It tottered atop a silver pole, just out of reach of a tangle of dried grasses, where the dirt road intersected with an even dustier road.
Sure enough. Karma.

The wind blew and the dead grass rustled. I walked around and took a couple of photographs as the directions from the Kwik Stop echoed back. I realized I’d found what I was looking for after all.

It’s not a place. Karma’s a road, and a dirt one at that.

Editor’s note: In this continuing series, author and photographer M.J. Alexander chronicles the sights and experiences that have left lasting impressions during her extensive Oklahoma travels.