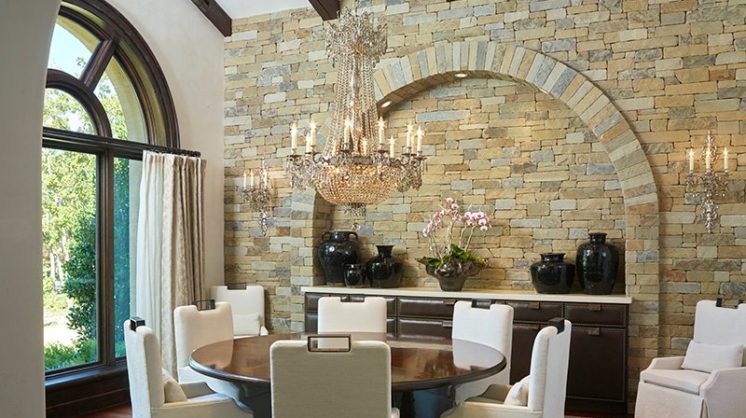 Steve and Karen Hudiburg were on the verge of becoming empty nesters when they started planning their new home near Lake Arcadia. Several years later, the result was well worth the wait.

The 6,900-square-foot “villa” backs up to Corps of Engineers land adjacent to the lake, so it was the perfect place to get out of the city and still be close to urban conveniences.

“We wanted to be semi in the country,” Karen said. “We were ready for a new phase in our lives, and we wanted away from the busyness.”

Steve designed the home with help from an old friend, a process that took two years, which turned out to be the same amount of time it took to build.

Donna and Virgil Onan of Carillon Homes were the builders, and Virgil made the Hudiburgs a promise when the project started. “We were friends,” Steve said, “and he promised me we would be friends after. We are. That’s rare when building a house together.”

The main wall in the dining room is 19 feet of natural stone with a built-in niche for the hot-service buffet. The scale is hard to reproduce in photographs, but the rooms are “voluminous,” to use Wilson’s word. The dining room table is more than six feet in diameter, and it accommodates eight chairs; it is also one of the few pieces the family had prior to building this home.

To make the home part of the overall change in their new phase of life, the Hudiburgs broke with their previous design preferences and opted to simplify their surroundings. Consequently, the color palette is full of neutral tones, and relies on accent pieces, including art, to provide color. Additionally, the goal of the interior design was to create a “stylish but comfortable home for family and friends.”

That’s how Troy Wilson, partner with Lisa Penton in 30A Home Retail & Design, described the goal. 30A worked with the Hudiburgs on the interior design aspects of the home.

“Much of how they use their home is centered around their grandchildren and guests,” Wilson said. “That means durable fabrics, and the size of the main living areas meant oversize furniture.”

“We wanted to keep the light colors on the fabrics, but we also wanted the house to feel welcoming, so we opted for beautiful but durable fabrics that allow the girls to play everywhere.” 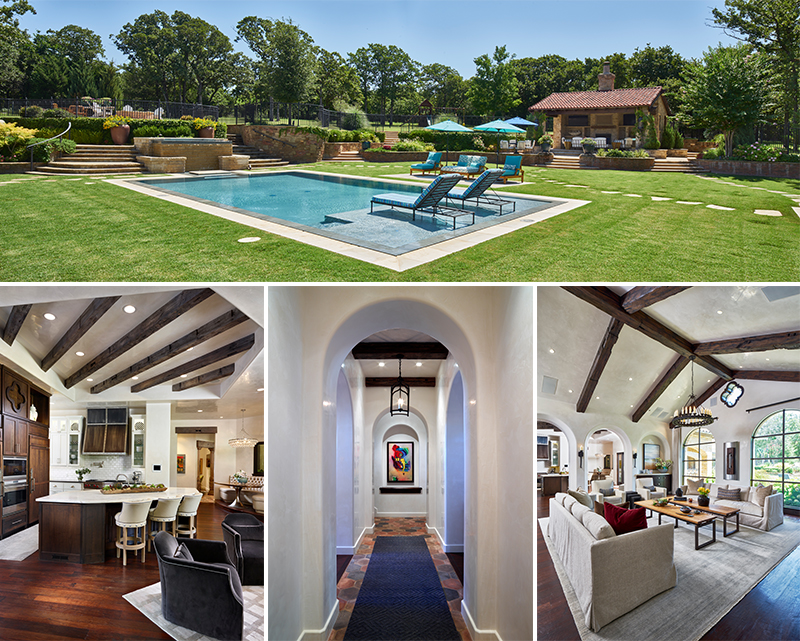 • The backyard’s large cabana was inspired by a magazine photograph, and helped set the mood for the entire house. Because their land backs up to largely undeveloped Corps of engineers land, wildlife is a pleasure – and a concern. To keep destructive deer away from the pool and plantings, the design team made a brick-and-stone retaining wall topped with a fence around the yard’s lower bowl.

• Steve worked with Renaissance Wood Company to purchase materials from barns in Wisconsin and Minnesota for the reclaimed ceiling beams in the main living areas. Combined with the arched doorways, the beams lend the house a Mission feel, just as the couple wanted.

• The arched doorways have their most dramatic effect in the main hallways, one of which bisects the entryway and living room. The arches create a cloister feel as they move toward their vanishing point, which is a piece of original art by Dallas artist J.D. Miller. The hall tees at that point, and the arches continue in both directions.

• The kitchen banquette is tufted leather, and it’s a custom job by Pike Upholstery. Steve said he loves the diner feel, and it offers additional seating in the large room.

The neutral palette also has one other notable advantage, as Wilson explains. “The Venetian plaster and reclaimed wood beams are striking, and the neutral tones allow those elements to stand out,” he said.

The arch pattern of a Mission-style home is evident in the large windows in the main living room and they allow in tons of natural light. With a 24-foot — at the apex — vaulted ceiling, the windows also had to be large enough to blend into the room. The scale is daunting, which made the choice to simplify so much more sensible.

“We had always used brighter colors as for walls and furniture before,” Karen said. “Simplifying meant being consistent with the neutrals.”

That choice makes it easier to select so many components, but it also means more attention to texture, lighting and accents is required. Wilson said the couple also wanted to do eliminate clutter — an empty-nesters’ Nirvana, surely.

Architectural choices like the repeated arches in the hallway and the dramatic use of natural stone and leather help create depth and texture, even with the neutral palette.

In the game room, the back bar features overhead service with cubbies for storage, a very unusual design for a back bar. The wine storage area is fronted by one of the many doors the couple got from Seret and Sons in Santa Fe, New Mexico. They, too, echo the arch pattern that runs throughout the home. 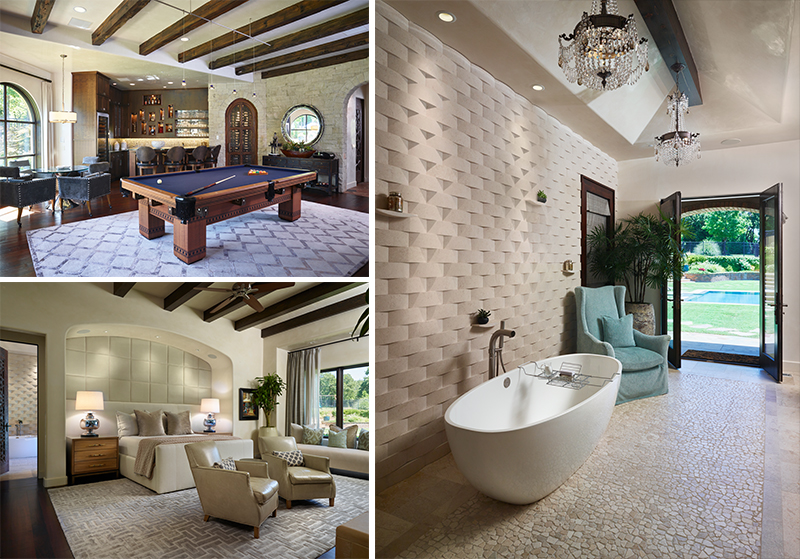 • In the master bath, a tile wall creates a basketweave effect behind the tub. A few of the stone tiles are offset, which allows them to function as decorative ledges for candles or objets d’art, yet another method of adding color. Karen said they saw the wall in a showroom in Dallas.

•  In the master bedroom, the wall behind the headboard is composed of individual blocks wrapped in suede. That was Wilson’s idea, and it was one Steve was happy to give him credit for. “I feel like I keep saying so much of this was my idea,” Steve said. “But I’ve designed a few homes, and I feel like I got the last one right.”

•  Steve also designed the bar in the game room. The centerpiece of the room is a pool table, which the family actually uses. It’s a replica of a 1930s-era Brunswick table.

Architectural choices like the repeated arches in the hallway and the dramatic use of natural stone and leather help create depth and texture, even with the neutral palette.

In the game room, the back bar features overhead service with cubbies for storage, a very unusual design for a back bar. The wine storage area is fronted by one of the many doors the couple got from Seret and Sons in Santa Fe, New Mexico. They, too, echo the arch pattern that runs throughout the home.

The kitchen banquette, which overlooks the covered patio, was also Steve’s idea. “If I could have built a whole booth, I would have,” he said. Above the banquette is a stunning chandelier composed of individual, hand-blown orbs of glass. Like much of the lighting in the house, the look is elegant, classic and dramatic without being gaudy. The chandelier relies on artisanship for its striking appearance, and thus it manages to further the “less is more” aesthetic while being breathtakingly beautiful.

This exquisite home, designed for a new phase of life, perfectly demonstrates that even when the children have grown up, an empty nest can be full of love, character and comfort.