The Spirit of Oaxaca - 405 Magazine

Shortly after 8p.m., from small second-story balconies, families watch and wave as I leave the mezcaleria, stepping out into the dry air of colonial downtown Oaxaca, Mexico – where I am swept into a percussive, frenzied parade of colorful skirts, twirling giants and brassy horns playing traditional Mexican music through narrow cobblestone streets. Caught up in the spirit of mezcal and all things Oaxaca, I stay with the candlelit procession. Wherever such a kaleidoscopic parade ends, an exponentially larger fiesta will begin.

At every intersection, more join. The Latin-infused melody of spritely horns and buoyant tubas repeats, growing louder, and drums beat with greater intensity as we make our way toward the town square and the famed La Iglesia de Santa Domingo where hundreds have gathered.

Lining the perimeter of the square, under a full moon, vendors hawk fruit juices and balloons while elderly women sell tamales, as well as an exotic variety of worms and grasshoppers. Meanwhile, the men cook arrachera (skirt steak), over an open flame, filling tacos and tortas late into the night. I eat and then it is time for more mezcal.

Mezcal, known for its soulful properties, is an ancient agave-based spirit, exclusive to the state of Oaxaca. Unlike its cousin tequila, which is made from one kind of agave, mezcal is made from more than 30 different kinds, and is always locally grown and distilled by fire, hand and horse. Mezcal’s passionate, leathery, uplifting flavor is subject to change based on how it is cooked and what agaves are harvested. No matter the method of preparation, Oaxaca’s mezcal is as enchanting as it is ever-present throughout the Mexican state.

Mezcalerias are small, local, family-owned bars that can be found throughout Oaxaca. These intimate establishments have limited seating, serve only mezcal and employ bartenders who are extremely well-versed in the roots of their particular brand.

Forty-five minutes outside Oaxaca City in the high Sierras, I arrived in the modest village of San Baltazar Guelavila. Here, Los Angeles-based entrepreneurs Fausto Zapata and Vicente Cisneros distill El Silencio, their increasingly popular brand of mezcal that began as a simple passion project and has quickly begun to appear in some of the premier cocktail lounges of the United States.

It is here, at a small palenque, or mezcal distillery, where El Silencio uses more than 50 local hires and a horse to ensure that their product makes its way from the rattlesnake-infested agave fields to the distillery, and into the bottle. It completes its journey under the watchful eye of Master Mezcalier Pedro Hernández, a ninth-generation “Maestro Mezcalero.”

If the previous night’s parade was an example of Oaxaca’s urban hysteria, the perilous trek into the Sierra Madres could only be described as rural pandemonium. Along with several jimadors (the men who harvest agave), their machetes and various other impossibly sharp tools, I load up in the back of a well-worn flatbed, and we begin to zigzag along sinuous ridgelines and narrow, rocky mountain roads.

As the last bastions of tire tread give way to an irrationally rocky, unmarked, Martian-like path toward the agave fields, we still have almost an hour under the blazing sun to go.

The sun is merciless, and the bottle of water I brought is gone. All I can think of is death, and an impeding crash into a cactus-lined ravine followed by dehydration-induced hallucinations, brought mercifully to end by the bite of a poisonous rattlesnake … yet we press on toward the agave fields.

Agave, when ready for harvest, is aged between 10 and 12 years. With the agave’s spiny leaves, a blazing sun and armed militias of angry bees, removing the thick leaves is a laborious, painful process. Not to be shamed, I grab a machete and, bees be damned, start to hack away the leaves of the agave plant, eager to get to the fruit at the center.

Once harvested, Fausto pulls out a bottle of El Silencio and we taste a drink. With my foot on an agave pineapple, as the drink burns its way down my throat, I look out forever into the Sierras and taste a lot more.

We return to the palenque, where employees hack dense, sticky pineapples into quarters. Once chopped, the pieces are loaded into a hand-dug hole filled with volcanic rock and burning mesquite wood. The choice of wood dictates the mezcal’s flavor. Once the pineapple pieces have filled the smoldering hole, the pile is covered with a tarp and three inches of soil, then left to cook underground for 72 hours. 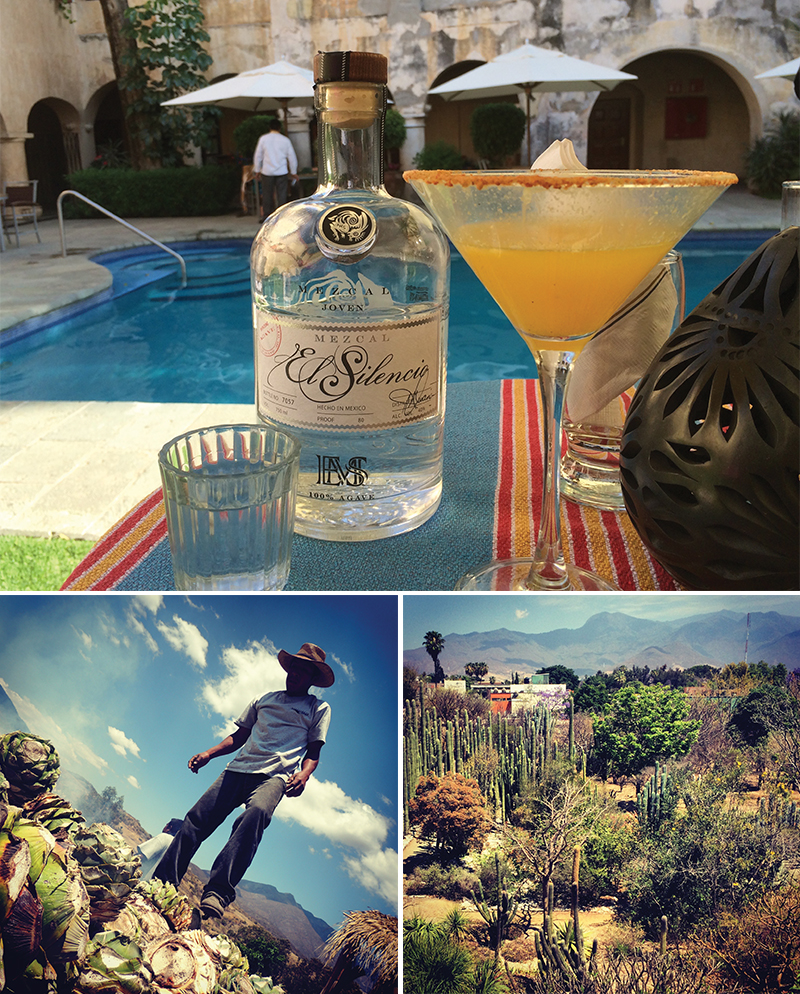 The pieces are then moved into another pit to extract the cooked sugars. A scrappy horse pulls a giant grinding stone in circles, crushing the pieces until the charred remains of wood are a sticky pulp. The pulp is then mixed with spring water and fermented, turning it into an agave wine – at which point it begins making its own alcohol.

Finally it is distilled. The alcohol is vaporized, twice distilled and held to an intensive taste test done only by the Maestro Mezcalero. Once blessed, it is bottled on site, boxed and shipped to the United States.

In the shade of the palenque, we join the villagers and the team from El Silencio for carne asada and a variety of moles so complex that each is worthy of its own story. The village is alive, as it has been for centuries, with the spirit of mezcal.

The following night, there is no parade. The streets of Oaxaca are emptier, and without the enticing colors from the previous night and the reverberating sounds in my ears, I see so much more than before. We make our way to another rich mole dinner. I’m sunburned, dehydrated and elated. As we walk, I look into the mezcalerias and watch as mezcal is poured. That night, poolside, as we toast the successes and the journey of the day, I know that the mezcal with which we toast has had a journey of its own. But it’s not just a journey. It’s a parade … a giant, timeless, parade. And where that parade ends, the fiesta begins.