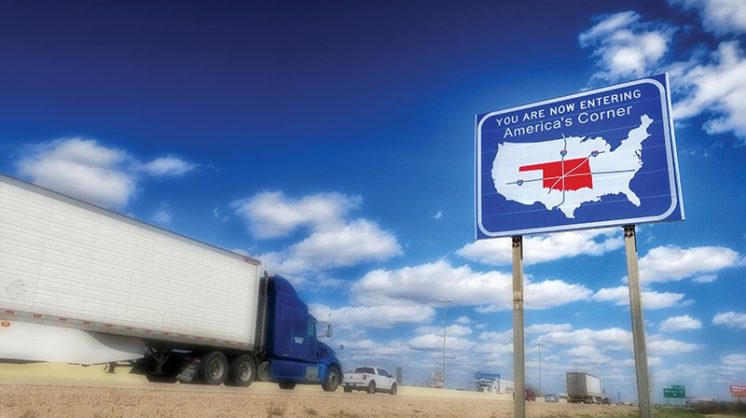 You know you’re getting close to Oklahoma City when one of the giant maps flashes by, about 20 miles outside the city proper.

Chipper and striking in red, white and blue, the body-length signs are staked on the right shoulder of the interstates and turnpike, greeting traffic on its way to the capital city.

They show a silhouette of the continental United States, depicted with an odd combination of detail – illustrating, for instance, the precise shoreline of the Gulf of Mexico, Cape Cod and Chesapeake Bay alongside a maybe-something-like-this attitude toward the border with Mexico, coupled with a middle-school-geography-test shrug of the shoulders in outlining the Great Lakes and Michigan.

But so what? The most important elements of the sign have nothing to do with the other 47 states on this map; it’s Oklahoma that is the star.

Reimagined larger than the state of Texas, standing out boldly in red against a nation of white, Super Oklahoma stretches from Nevada to Illinois, Texas to Nebraska.

Its interstate arteries – I-35, I-44 and I-40 – meet in the center, pinpointing the heart of the state and the precise interchange motorists are barreling toward.

The sign announces the news: YOU ARE NOW ENTERING AMERICA’S CORNER.

But that is the last travelers will hear of it. The intersections themselves make no mention of the designation. America’s Corner is not listed in tourism brochures, flogged on truck stop magnets or featured on T-shirts. Only a handful of photos are posted online, taken of the signs from windows of fast-moving vehicles or by daredevils who pull over on the interstate for a quick shot.

As it happens, this month marks the 20th anniversary of the birth of America’s Corner. In the first week of June 1996, Oklahoma’s Transportation Commission approved an action called for by Senate Joint Resolution 37, “to promote the state as a national hub for transportation-sensitive industries.” The resolution had requested that a 20-mile radius around the intersection of Interstates 35, 40 and 44 be designated as America’s Corner.

The idea was similar to the foresight shown long ago by Tulsa businessman Cyrus Avery, who successfully lobbied to have the major road from Chicago to Los Angeles drop south through Oklahoma: Position the state as the center of the next big thing in transportation.

With the North American Free Trade Agreement taking effect in 1994, talk turned to a superhighway crossing the United States and joining Canada and Mexico.

Oklahoma jockeyed to position itself as a key player in the debate, promoting I-35 as the main NAFTA trade corridor. In 1997, the Tulsa World reported: “State officials are touting Oklahoma as ‘America’s Corner,’ the hub of an international trade route that links the United States with its international North American Free Trade Agreement partners Canada and Mexico.”

U.S. Sen. Don Nickles, a Republican from Ponca City, designated I-35 as a high-priority corridor in the National Highway Bill, noting “an international trade corridor will help to stimulate local economies in need of a boost, such as Oklahoma City.”

State Sen. Keith Leftwich, a Democrat representing south Oklahoma City, promoted and invoked the new name, arguing “It is time for Oklahoma to take advantage of our strengths to encourage economic growth, and, right now, Oklahoma is faced with a tremendous opportunity. I-35, I-40 and I-44 are America’s Corner, and we must use them to our advantage.”

In the weeks before the America’s Corner designation, The Oklahoman wrote: “If tourism was the mother of U.S. Route 66 – then trade will be the father of the proposed North American Free Trade Agreement superhighway system.”

But the project – sidelined by political battles, lack of funds and shifting priorities – never materialized.

In the years since, the concept of a NAFTA-inspired superhighway has become a bête noire of conspiracy theorists, who see it as a virtual highway to hell: a monster swath of 10 lanes of pavement stretching maybe four football fields wide, slicing through the heartland and a step on the road to a North American Union that would strip the United States of its sovereignty.

Undeterred, the signs stand sentry in testament to a 20-year-old dream, declaring in patriotic red, white and blue that Oklahoma City – once one of the featured stops on the 20th century’s Main Street of America – is the proud 21st century home of the spot where the interstates cross to form America’s Corner.