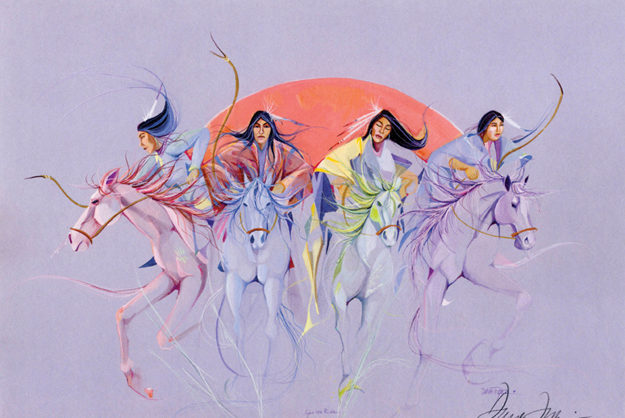 A tragically brief career was enough to found an artistic legacy, one that continues to produce powerful, award-winning Native art. Despite persistent adversity, the Tigers have made creative inspiration a family affair.

In November 2011, the immensely majestic Grand Palais in Paris hosted the prestigious “Art en Capital” exhibition, featuring works by more than 2,000 artists from around the world. Even amid that august company, the powerfully depicted strength and determination of Native American women warriors in one artist’s pieces was palpable for the exhibition’s more than 40,000 visitors; they were the work of Dana Tiger.

The award-winning, nationally acclaimed Muscogee Creek/Seminole/Cherokee painter recalls that exhibition and another at the nearby Orenda Gallery, privately owned by Nicolas and Joëlle Rostkowski, as if the experience were a dream: “Being with the other Native artists there in Paris as the first Native artists to ever be invited to the Grand Palais exhibition was an historic step that we took, for us and for other Native artists to carry on after us,” Tiger smiles. “It was the trip of a lifetime.”

She has had a lifetime immersed in Native art – her own virtuosity was naturally inherited as the eldest daughter of the prolific Creek/Seminole artist Jerome Tiger (1941-1967). Dana was only five when her 26-year-old father was killed by an accidental, self-inflicted gunshot wound; an ironic tragedy since Jerome was renowned as an expert marksman who, Dana recalls from family tales, once shot a cigarette out of a young woman’s mouth standing no fewer than 50 paces away.

However, his artistic legacy endured – both in his immense body of work, which he created in just a few short years of painting, and in the gifted hands of his family. Jerome’s children, Dana, Chris and Lisa, as well as his brother Johnny Tiger, Jr., persevered in art after the untimely, tragic loss of the family patriarch.

“Being surrounded by daddy’s art was how we knew him,” Dana says. “In a way, it made me not want to be an artist because he was one of the best in the world. I thought there was no way for me to live up to his legacy. But daddy spoke to me through his painting and encouraged me to paint, and I never stopped.”

In the wake of Jerome’s death, the family pulled together to remember and continue his work – his widow Peggy Tiger published The Life and Art of Jerome Tiger (Norman: University of Oklahoma Press, 1980) and established The Jerome Tiger Art Company to sell prints of her late husband’s art.

All of the Tigers helped with the business over the years in different ways, including Dana’s younger sister Lisa and their brother Chris. A budding young boxer and artist known for his generosity and sensitivity, he became the family’s second victim of tragedy when he was shot and killed in 1990. The Tulsa Indian Art Festival that year was the last art show in which Chris and Dana exhibited together.

“After Chris was killed, I painted a piece called ‘Watching Over Us’ in [his] honor,” Dana says. “In the painting, Lisa and I are on the ground surrounded by a beautiful landscape with Chris in the clouds looking down on us. The following year, I donated the painting to the festival’s auction, with proceeds from the sale of the piece benefiting a scholarship for up-and-coming artists.” Chris’ painting, “Warrior’s Image” – a mystical painting on which he wrote the words: “A man traveling through time back to his destiny” – still hangs at the Tiger Art Gallery. His words are also engraved on his tombstone.

Lisa traveled extensively on a speakers’ bureau with Wilma Mankiller, the iconic first female Chief of the Cherokee Nation, along with the renowned author and activist Gloria Steinem and Amy Richards, Steinem’s protégé. Dana’s art career was flourishing, and life seemed to be looking up for the family. Then Dana began to suffer symptoms of Parkinson’s Disease, which progressed to the point that “people began asking if I had had a stroke or a car wreck,” Dana remembers. “Wilma encouraged me to go to a doctor, which is when I was formally diagnosed with the disease.”

In yet another blow to the Tigers, Lisa too was diagnosed with Parkinson’s a short time after Dana. The family decided to turn to traditional medicine to combat the disease – an approach that seems, in a much-deserved stroke of good fortune, to be working. Against formidable odds, Lisa was able to conceive and give birth to a healthy baby girl, Crickett, who was protected from Lisa’s HIV during pregnancy and birth through vigilant medical care.

Parkinson’s has unquestionably had an impact on Dana’s art. She has, however, learned to incorporate a lighter and looser touch in her brush strokes to accommodate her loss of muscle control. “I still have the ability to paint, but it is a different process for me now,” Dana explains. “My art is not planned as much anymore; I have to just go with what my body does, which is often unpredictable. But I still have the same desire to paint – if not more desire now, after exhibiting in Paris under the same roof as Picasso, Renoir and Matisse.”

Today, Dana’s artistic range spans from abstract geometrical work to realistic portraiture and depictions of community gatherings, and her paintings hang in prominent public and private collections around the world. In 2001, Dana was inducted into the Oklahoma Women’s Hall of Fame. The following year, she founded the non-profit “Legacy Cultural Learning Community,” dedicated to nurturing Native youth through the celebration and sharing of tribal languages and culture through the arts (legacycultural.org). Dana and Donnie also run the Tiger Art Gallery in Muskogee (tigerart gallery.com), which features work by three generations of the Tiger family… including Christie and Lisan, who have been demonstrating innate artistic prowess since before they could talk.

In Dana’s children, it appears that the next generation of the Tiger artists may already be asserting their respective roars. Christie was recently awarded a talent scholarship to attend the Santa Fe University of Art and Design, where she begins in the fall. As a sophomore in high school, Lisan has already won numerous awards as well, working primarily in sculpture. The Tigers currently are preparing for upcoming art festivals, including the Red Earth Festival in June, the Santa Fe Art Market in August and a return trip to Paris this November for an exhibition at Orenda Gallery, which will be devoted to art by all three generations of Tiger artists.