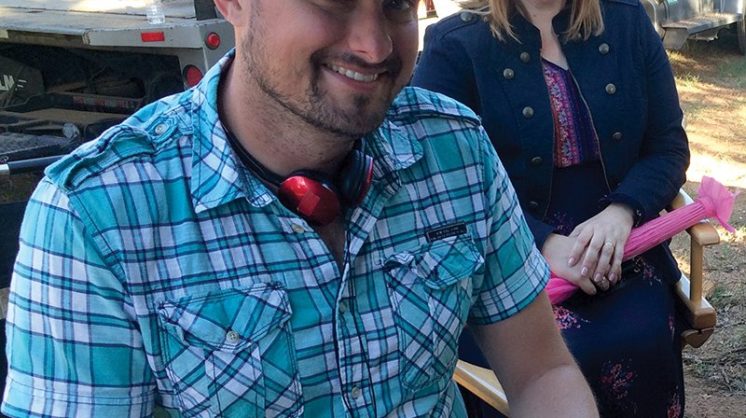 The latest feature film to be produced in Oklahoma is the western romance The Mustanger and The Lady. The film is based on the 150th (yes, really) novel from Arkansas writer Dusty Richards, the most prolific living writer in the western genre.

Executive producers Amber Lindley and Kenn Woodard wanted to make a film based on one of Richards’ books for their Arkansas-based production company, Chasing Sunsets. They met with the celebrated author, read The Mustanger and The Lady and decided immediately to adapt the book into a movie … with one twist. They wanted to switch the focus and tell the story from the point of view of the woman.

“Richards does not typically focus on women, but he writes great characters,” Lindley explains. “We were drawn most to the character Julie. So, we took the western from her perspective.”

“We pursued the angle where she did not have to be rescued by a man,” adds Woodard. “She needed to find her own voice and her own journey, learning to trust herself.”
They found a kindred spirit in director James Cotton.

“I love the idea of doing a western from a female perspective,” Cotton says. “It’s the story of a woman finding wisdom through romance. You put that in a western backdrop and you have something really unique.”

In the novel of The Mustanger and The Lady, the story takes place in Arizona. The production company Chasing Sunsets looked at several different states as potential locations for their movie, including California, New Mexico and Nevada, before ultimately deciding to film in Oklahoma.

“The rebate program was a huge factor for us,” says Lindley. “We were on our way to Wyoming, but decided to stop the trip and check out Oklahoma since it was right next door. We called the Oklahoma Film and Music Office. The office was so quick to reply, encouraging us to meet local crewmembers and check out the varied landscapes. We got a package emailed to us within 15 minutes of our call. It was a very comfortable decision.”

Films produced by companies based outside of Oklahoma account for more than half of the films made in Oklahoma. These visiting productions employ hundreds of local cast and crewmembers, rent rooms at local hotels, buy lumber and antiques at local stores and eat at local restaurants throughout the productions.

The biggest incentive for filming in Oklahoma is the cash rebate program managed by the Oklahoma Film and Music Office. Oklahoma offers a 35-percent rebate on every dollar spent in Oklahoma for film and television productions of $50,000 or more.

But it takes more than a good rebate to land film productions in the current competitive environment. “Our UPM (unit production manager) Nathan Gardocki was great at helping us find a local crew,” Woodard says. “They have been one of the most professional and kind crews we have ever worked with.”

“They are just like a family,” says Lindley. “Nathan put together a great team where they all know what each other can do. I could not ask for anything else. Their experience and professionalism is great.”

Lindley and Woodard admit that Cotton was the perfect bridge between Arkansas and Oklahoma. He was born in Little Rock, Arkansas, and raised in Sallisaw, Oklahoma, before graduating from Oklahoma State University and heading to California. Cotton directed his first feature film, Sugar Creek, in Arkansas. When offered the opportunity to return to Oklahoma to make a film, he jumped at the chance.

“That was the main thing I wanted to do,” Cotton says. “It is so exciting to be back home and meet the filmmakers from the area. We are making a movie that looks so much bigger and better than our budget. Oklahoma is the best place to shoot.”