The Treasure of Spiro Mounds - 405 Magazine 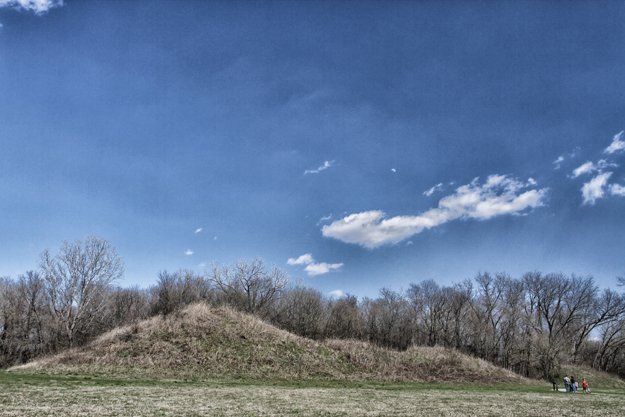 Spiro Mounds Is At Once The Most Authentic And Most Inauthentic Ancient Site In Oklahoma.


The 150-acre park, with its dozen mounds, is the only one of Oklahoma’s 25,000 prehistoric sites open to the public, and comprises the state’s only archaeological park. The land is acknowledged as one of the most important Native American sites in the United States, a seat of power and culture for Caddoan-speaking tribes west of the Mississippi River from 850-1450 A.D., and listed as one of the top sacred sites in North America.

The mounds scattered near the vast central plaza were built over the course of centuries, one basket of dirt at a time, and tell the story of the rise and fall of a complex society.

“It was not a nation, really, but a confederation of over 60 different tribes, over 30 different language groups, well over 3 million people and stretched all the way from the Rockies to the Virginia Coast, from the Gulf Coast of Florida to the Great Lakes,” says park manager Dennis Peterson. “Their trade extended further. Spiro’s trade goes all the way from the Gulf of California east, so pretty much most of the United States either had contact with them or was controlled by the leaders here at Spiro.”

The leaders themselves – more than 1,100 – were interred in the great burial mound, laid to rest with ceremonial items denoting their importance in this life and the life beyond. The bones of revered ancestors, ceremonial regalia, elaborate jewelry, axes and maces, blankets and beads and effigy pipes, treasures of pearl and copper and shell were buried together and left undisturbed for 600 years, until they were unearthed in the 1930s.

Few places on the continent are steeped in more prehistory, and mystery.

Unlike the ancient pyramids or cliff dwellings, the key feature of Spiro Mounds today is reconstructed. The four-lobed burial mound that is the centerpiece of the park, as long as a football field and more than 30 feet high, is not original. It was built in the 1970s, a replacement for the ancient Craig Mound razed during the Great Depression by impatient treasure hunters and gung-ho researchers. All but the smallest artifacts in the interpretative center are reproductions.

But that does not faze Peterson, who has managed the site since 1987. “Once you’ve dug it up, you can’t go back again. Archaeology is a destructive science.” 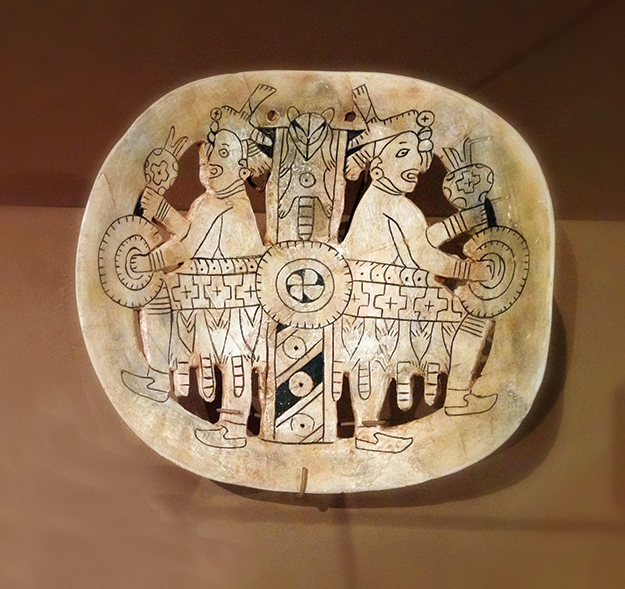 It is the big picture that Peterson sees, and the great mound is just one piece of the puzzle. He leads detailed tours of the site on the first days of spring, summer, fall and winter, walking the curious across the paths and through the mounds. He brings visitors to the replica of the Spiro house, tells tales of political intrigue, of rousing stickball games on the great plaza and of a town of elites built to align with the setting sun on the equinoxes and solstices. He speaks of the past in the present tense.

“In my mind’s eye, I see not an empty field and not hills and grass, but can imagine those 10,000 people living in the city around us, hundreds living on the property next to the burial mound. Tons and tons of kids and dogs running around. In my mind’s eye, it’s a cacophony of noise – burning wood, hunting, fishing, farming, bringing things in, trading things.

“This is the pinnacle of Native American culture in Oklahoma. We have such a limited and skewed version of Native America that lives in our heads because TV and movies put it there. If you ask nine out of 10 people what they know about the culture, chances are it’s whatever they saw in a John Wayne movie. The society that lived here pre-European contact was of such complexity, many just can’t grasp it.”

His glass-half-full approach points out the positive developments that resulted from the destruction of Spiro Mounds: the state of Oklahoma became a leader in the preservation of antiquities, passing one of the nation’s first laws to protect ancient sites in 1935. The discovery of the mound treasures, however ham-handed, brought a deserved attention and greater understanding to the details of life for the pre-Columbian Mississippian people. And the grave diggers’ selling of the treasures to far-flung buyers – with collections of Spiro artifacts now in dozens of museums including the British Museum and the Louvre, the Hermitage and the Smithsonian – brings awareness of the culture that once flourished in eastern Oklahoma, and attracts visitors fromaround the world who want to see where the artifacts originated.

“You can’t get a feel of what the past is like unless you see it. Gettysburg, Bull Run. Black Kettle. And Spiro. Unless you’re actually there, you’re only getting part of the story.” 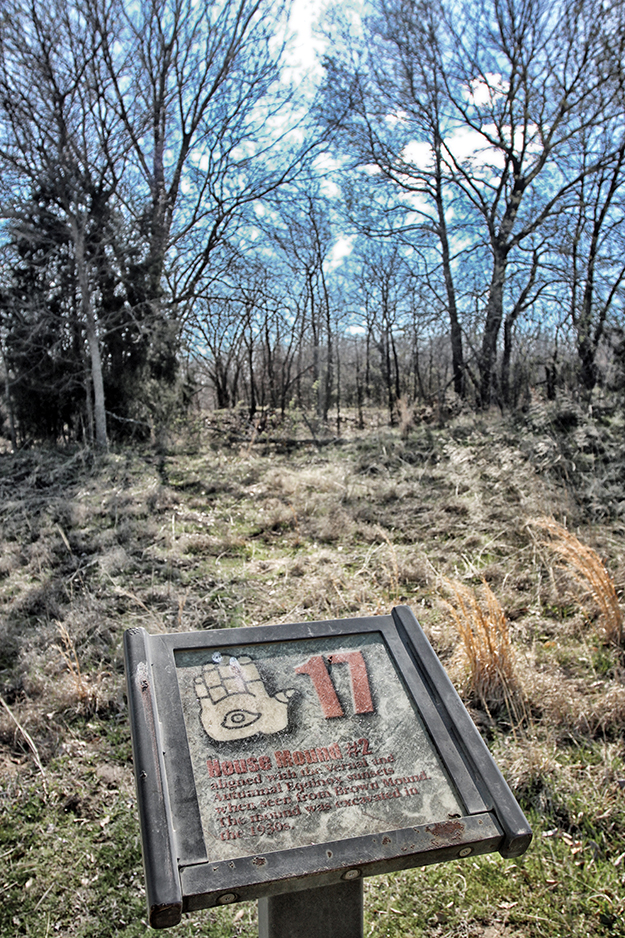 A “King Tut” Tomb of the Arkansas Valley

After the mound builders moved on, the area around Spiro Mounds did not host a permanent settlement until the Choctaw Nation was forcibly relocated to Indian Territory from Mississippi and Alabama in 1832.

The Choctaw recognized the mounds for what they were: remnants of an ancient people. They did not farm the mounds, and – when forced by the federal government to dissolve their tribal government and divide up the allotted lands among its people – it assigned the land of the mounds to the freedmen, their former slaves.

The first owner after statehood, Rachel Brown, lived in a cabin near what is now known as Craig Mound. She told of mysterious sounds and of blue flames emitted from the mound at night, and of mules that were spooked around the structure. William Craig inherited the property after Brown’s death, and kept the curious away. Upon his death, he willed the land to his young grandchildren. Their maternal grandfather, George Evans, saw leasing the land as a way to get money to pay off his mortgage and to treat his grandson’s tuberculosis.

So 80 years ago, in 1933, in the depths of the Great Depression, a group of six men – calling themselves the Pocola Mining Company – kicked in $50 each to raise the $300 Evans was asking for a 2-year lease to excavate the mound on the Craig property.

Descendants of the miners say they believed gold was hidden in the mound, stashed by early Spanish explorers who were traveling the rivers of the interior from Colorado, trying to make it to the Mississippi and the sea. The story maintains that the gold was buried in a mound near a river, along with the Indian guides who were killed to keep the secret.

They started with picks and shovels. At first, the relics and skeletons the diggers unearthed from the mound were of little interest. These men were after gold. But curiosity seekers would come by and offer a nickel or a dime for an artifact that caught their eye. As word spread, curio hunters came by the mounds to buy up more of the items.

When word of the cache of relics reached Forrest Clements at the archaeology department of the University of Oklahoma, he tried to stop the dig. He attempted to buy out the investors, who were discouraged they weren’t hitting pay dirt. He tried to get Evans to rescind the lease. He lobbied the Oklahoma Legislature to pass an antiquities act to protect the mounds from commercial digs – and there he succeeded.

But not everyone agreed with his idea that the past was public property.

The 1930s was the era of the fictional Indiana Jones and the decade after the spectacular unearthing of King Tut’s tomb. Weren’t archaeologists really treasure hunters too? 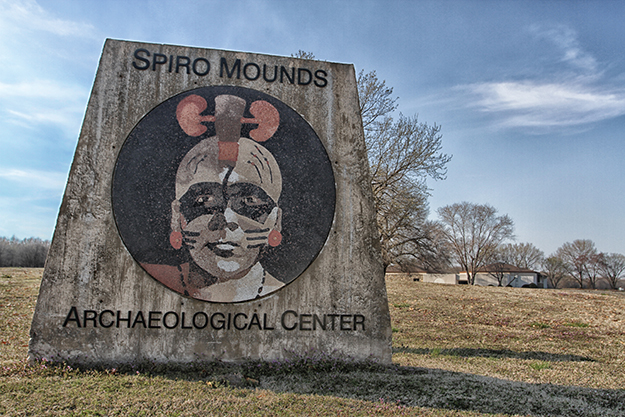 Clements explained the difference in terms of the greater good: “If the at-present, almost wholly unknown, prehistory of Oklahoma is to become a matter of scientific record, the archaeological work must be done by formally trained persons and published in the orthodox scientific journals before the relatively few sites have been irretrievably ruined.”

He added a simple assessment, in layman’s language: “Scratching around can never be useful and is always damaging.”

Four months before the Pocola Mining Company’s lease was to expire, the new law allowed Clements to contact the LeFlore County sheriff’s office and file a complaint about the now-illegal digging on Craig Mound. A deputy showed up and told the men they had to stop, under threat of arrest. Clements, thrilled that the slow destruction of the mound through shovel and pickax had been stopped, headed to California to teach a course.

Upon hearing that Clements had left the state, the Pocola Mining Company snuck back to the mound to get as much for its investment as it could. They hired out-of-work miners and decided to speed up their quest to tunnel through to the mound’s center. About 30 feet in, they hit fragments of conch shells, engraved with faces and symbols. Accounts tell of the miners hauling out the decorated shells by the wheelbarrow and dumping them near the entrance, where they were crushed underfoot.

Eventually, the diggers hit a wall of hard-packed earth, 18 inches thick. In his book “Looting Spiro Mounds,” historian David La Vere tells of the moment of discovery and what waited on the other side: “The pick blade broke through into empty space. Immediately there was a hissing noise, as humid Oklahoma summer air rushed into the hollow chamber beyond.” The miners’ lamps revealed one of the most stunning finds in the history of the continent: the largest trove of pre-European-contact artifacts north of the Mexican border, sealed in Spiro Mounds decades before Columbus set foot in the Americas.

What followed was a feeding frenzy. There was neither time nor inclination for photographs or sketches to be made of the layout or holdings in the central tomb. Witnesses tell of beads, pearls and arrowheads spilled across the site, feather capes and elaborate weavings trampled, ancient cedar poles burned as firewood and human bones piled at the edge of camp, where they soon crumbled to dust. 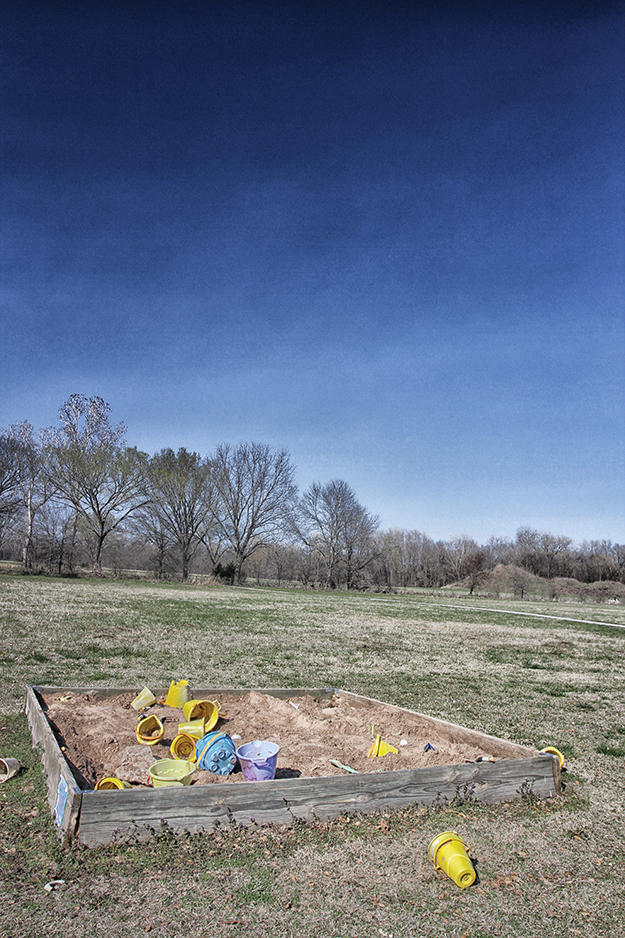 The Spiro Mounds treasure made headlines nationwide. The New York Times trumpeted the significance of the relics, inaccurately noting that “each item taken from the mound is catalogued and photographed and careful records are being kept.” The Kansas City Star heralded the discovery of a “‘King Tut’ Tomb of the Arkansas Valley.” Soon, other LeFlore County mounds came under attack from relic hunters wielding shovels and driving mule-team-drawn scrapers.

With the burial chamber sacked, time running out on their lease, and Clements due back from California, the Pocola Mining Company decided on one last action. From La Vere’s telling: “In a fit of spite, just to jab their finger in Clements’ eye, they packed the central chamber of the Great Temple Mound with kegs of black powder and touched off a mighty explosion.”

The blast shattered whatever items remained in the chamber, creating a small cave-in and a large crack in the mound and, according to La Vere, “destroyed the Pocola men’s reputation as down-home heroes fighting for their property rights, blowing them instead into the ranks of looters and destroyers.”

The men were eventually arrested, but there is no record of them serving time. The damage was done.

Though the artifacts were priceless, the miners sold them for next to nothing. The money to be made was pocketed not by the workers but by dealers reselling the items to private collectors and museums.

The wealth of secrets lost in their rush to find gold disintegrated as quickly as the crushed fragments of bone and shell. They are now known only to the wind and the earth near the bend in the river where Spiro once ruled.