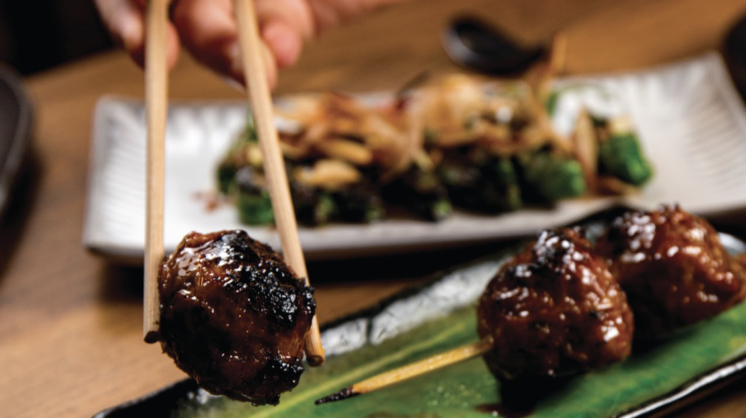 Translating food is not an easy thing, both in terms of language and approachability. Asian restaurants have dealt with it for decades by including English and the original language – Chinese, Korean, Thai, etc. – side by side on the menu. The language component is just one part of the translation, though. What about ingredients, textures, aromas, even utensils?

Much of the genius of Gun Izakaya is in the ability of Rachel Cope and executive chef-partner Jeff Chanchaleune to translate Japanese pub food for an Oklahoma audience. Cope said that one of the hurdles was educating staff, and then educating the public. 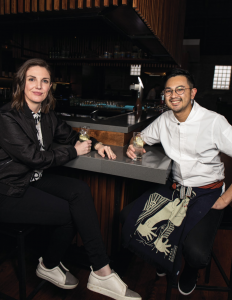 Goro, the sister restaurant to Gun, was the first installment of what was always going to be a fully realized vision of Goro and Gun – the names intentionally chosen from 1985 Japanese buddy film Tampopo. “We had the grill when Goro opened,” Chanchaleune says. “We just had functionality issues at Goro that made it impractical to do there what we’re doing at Gun.”

What they’re doing is primarily yakitori (skewers of chicken) and yakimono (skewers of peppers, mushrooms or pork belly). Skewers are 3-5 pieces of chicken or veggies, typically, and so prices are low and sharing encouraged. Noodles, dumplings, sandos and catfish come from the back of the house, and except for udon noodles, in small-plate sizes. Speaking of catfish, it’s the perfect example to talk about translation. 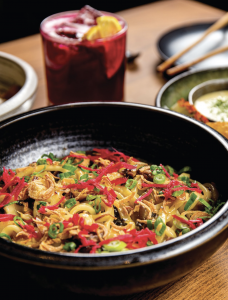 “In Japan, the fried fish would be red snapper or a white fish, but this is Oklahoma, so we thought catfish would be perfect,” Chanchaleune says.

The fish is flaky and moist, avoiding the density of some catfish preparations, and the acidity of the yuzu kosho slices through the fat with a pop of zest. At its heart, though, it still tastes like delicious catfish – thus the translation. The diner has now had a dish with which they are familiar, presented in a new “container.”

“We’ve learned a lot of lessons from Goro,” Cope says, “and one of those is that you have items on a menu that sound familiar.”

For adventurous OKC eaters, Jeff Chanchaleune has become a household name, and for vegans, he’s a star chef. The eggplant dumplings are arguably the best thing on Gun’s menu, and they’re vegan – even if you think you don’t like vegan food, the dumplings will have you writing power ballads praising them: complex, flavorful, intense layers of flavor in one bite. Vegan udon will have been added to the regular menu by the time this issue is out, and it, too, is arguably better than the non-vegan udon dish currently on the menu … even though that is itself extraordinary.

The hands-down bestseller in the bar is the Japanese highball, a remarkably clean, crisp whiskey soda made with Suntory Japanese whiskey. Cope imported the equipment to make the simple concoction, and while we know that was pricey, it was absolutely worth the investment. Goodman’s other cocktails range from fruity to savory, and light to boozy, but they’re thoughtful, creative and well balanced across the board. 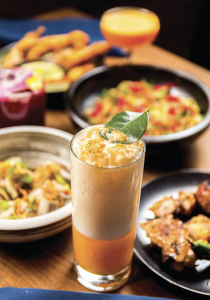 Service is team centered, since skewers come off the grill nearly constantly when Gun is busy, and generally excellent. Don’t be afraid to ask for a fork, especially when eating udon. And one final tip: If Chef Jeff has prepared a fish feature for the night, don’t say no.